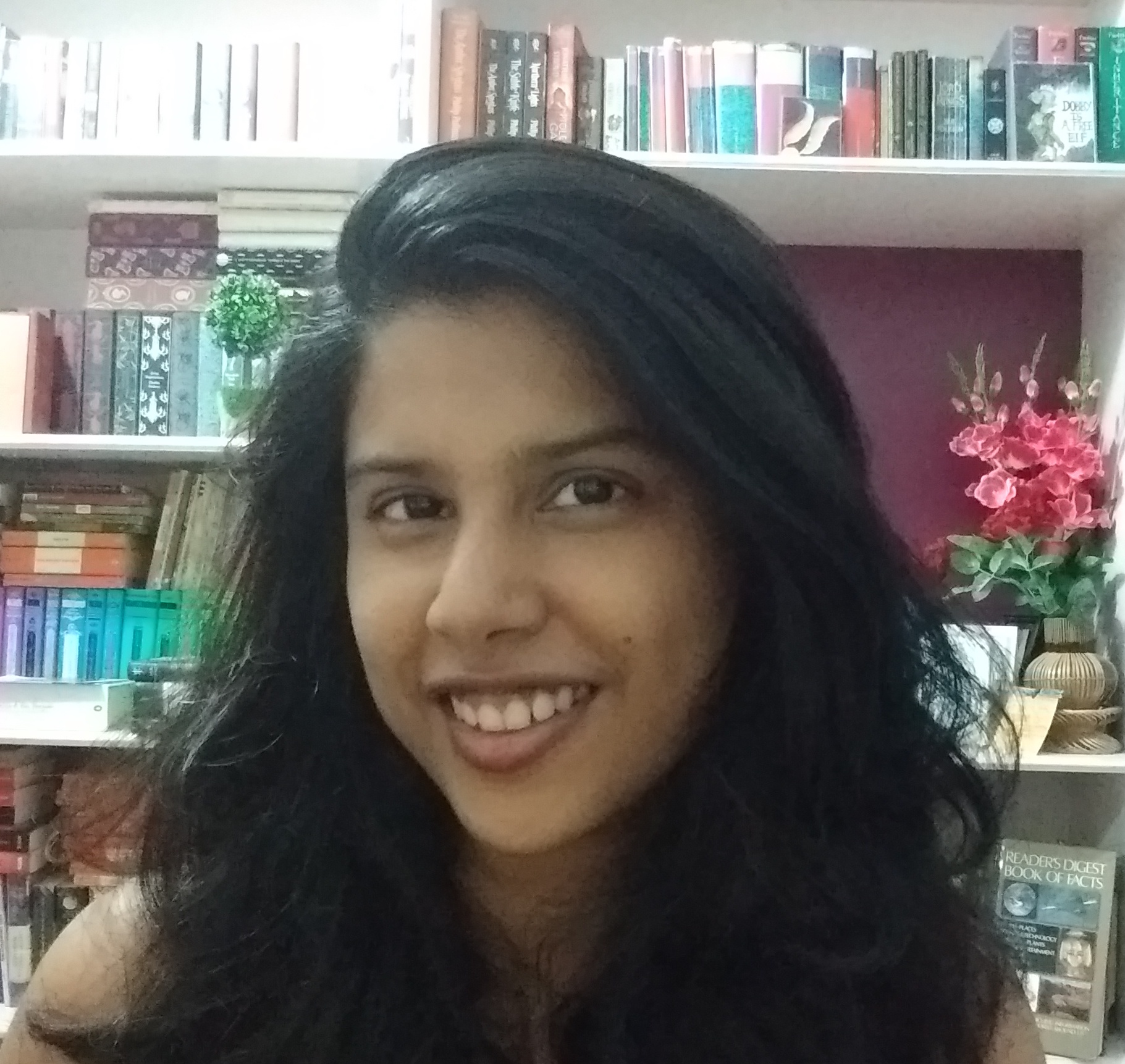 On days when you look up to the skies, the infinite stars and question your own existence, don’t panic and read The Hitchhiker’s Guide to the Galaxy. 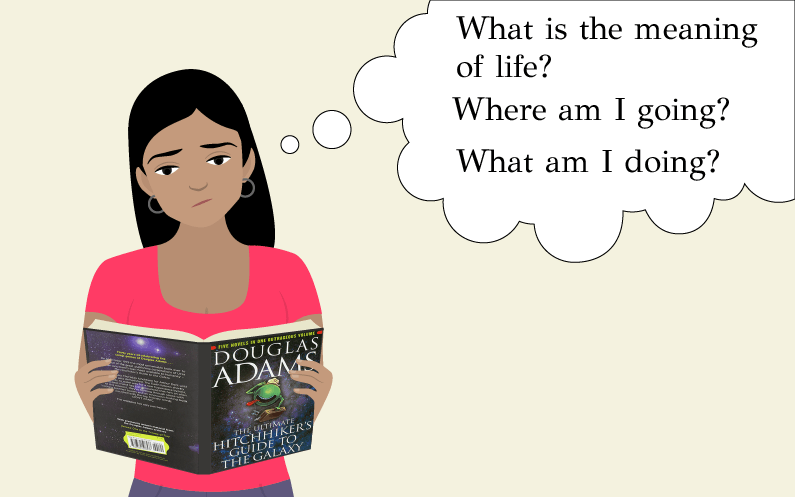 Arthur Dent wakes up one morning feeling like he has forgotten something. Spilling coffee over himself, he rushes out only to find bulldozers ready to raze his house. Turns out his house is about to be demolished and he hasn’t even had his morning cup yet.

In the next few minutes, he will witness the destruction of his planet and over the next few hours, he will realize that not only do aliens exist but also find himself on their hit list. He has somehow managed to stumble into the middle of an inter-galactic war.

Armed with a towel, still dressed in his pyjamas and robes, and accompanied by his friend Ford (an alien), Arthur Dent goes from being an ordinary human with regular problems in the morning to sitting in a spaceship waiting for Earth’s destruction, by the afternoon. 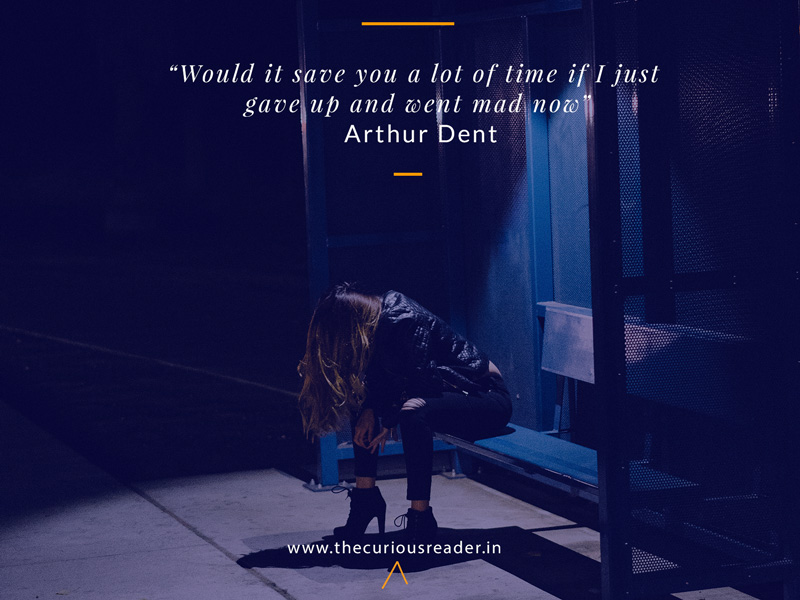 What makes Hitchhiker’s a fitting companion on the day you feel like questioning everything in the universe, is the almost blithe acceptance that follows the need to go mad.

After surviving Earth’s destruction, and being almost incinerated by a Vogon fleet, Dent reaches this understanding and, from then on, he takes everything in his stride. A trip to the Restaurant at the End of the Universe? Bring it on! A race of hyperintelligent pan-dimensional beings disguised as mice wanting to dissect your brain? Let’s roll with it! Discovering that your planet has been part of a billion year experiment by an artificial intelligence? Sure, why not? 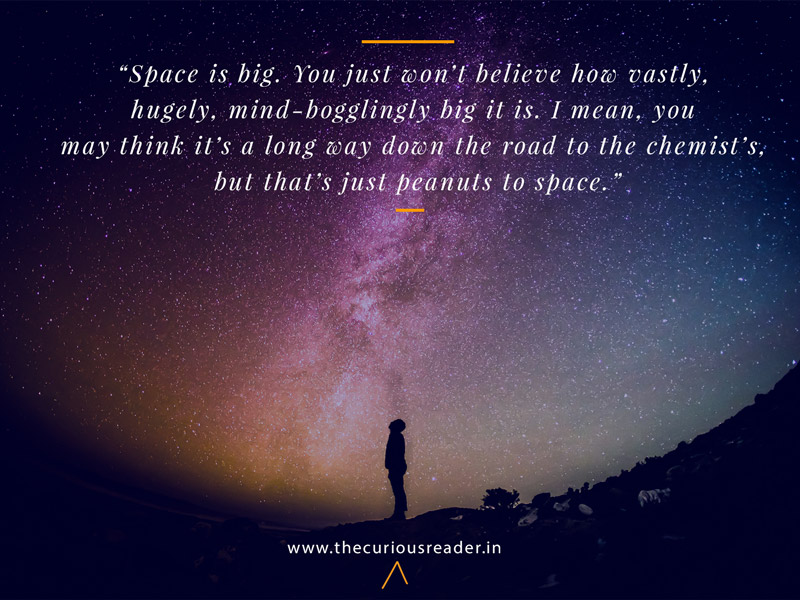 Hitchhiker’s makes you contemplate the infinity of space – of worlds yet undiscovered. Why this book works in this situation is that it makes you think – loud and clear – of the multi-dimensionality of the universe where your own planet lies. In the last few years, we have developed theories of the multiverse – of parallel worlds that might coexist with our own – worlds that may be infinitely similar or infinitely different from the Earth that we are inhabiting at this time.

In Hitchhiker’s accident plays a major role in the individual events that occur. We can’t plan for everything; sometimes things don’t work out, but we get over it. For Dent, accidents not only place him in strange situations but also help him get through them. For example, after being thrown into space, they are coincidentally picked up by Ford’s semi-cousin and President of the Galaxy, Zaphod Beeblebrox. 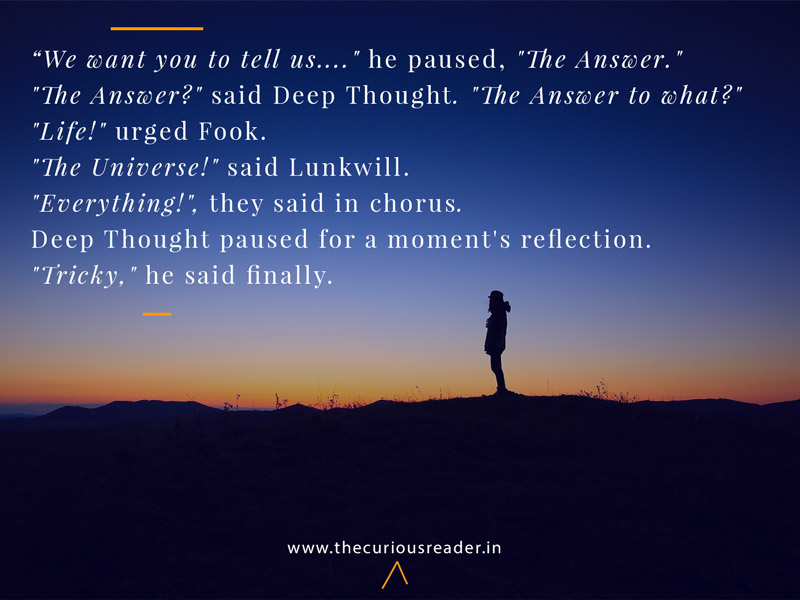 Life for Adams is the ultimate mystery and the only way to understand it is to experience it. The inability of Deep Thought to produce an adequate answer to this question, despite having taken 7.5 million years to come up with it, lies in the fact that our minds are not ready for the answer and often, we don’t know which questions to ask. There are no perfect answers and we need to take that in our stride too.

So, on the days you look up to the sky and wonder about the meaning of life, the universe, and everything else, read The Hitchhiker’s Guide to the Galaxy and experience the overall feeling of infiniteness that the book seeks to convey to its readers. It will give you perspective in the face of overwhelming circumstances while making you laugh. You will want to eat at the ‘Restaurant at the End of the Universe’ and find yourself contemplating the horror of the Total Perspective Vortex. 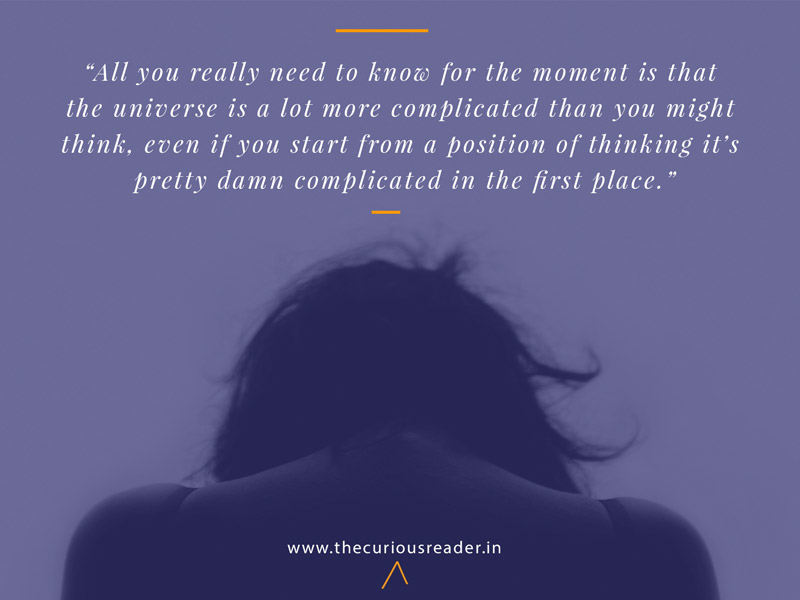 Learn from Arthur Dent and take things as they come. Brew a cup of tea, get comfortable and dive into the world created by Douglas Adams. Remember to keep a towel nearby and, above all, DON’T PANIC.

Reader, Blogger, PhD. Books are her beat. She loves to read, talk and write about books. At any given time, you could find her somewhere in between the pages of a book.
She blogs at keepcalmandreadall.wordpress.com