In a convoluted story where fact is derived from fiction and fiction somehow is a reflection of reality, let us start with a fact. Kim Jong-Il, the Dear Leader, was a sophisticated and refined man. To stress his refined approach to fabrication and telling monumental lies, Kim II had changed the name of the “Department of Propaganda and Agitation” to the more elegant “Literary and Artistic Department.” I concede that the former is fiction and the latter, a fact!

North Korea is built on a contraption of lies and illusions, expertly contrived and woven into literature for mass consumption. While the use of arts and literature to further indoctrinate political dogma might not have been invented in North Korea, although they might eventually lay claim to it, the mere scale at which it is executed is definitely unique to the country. 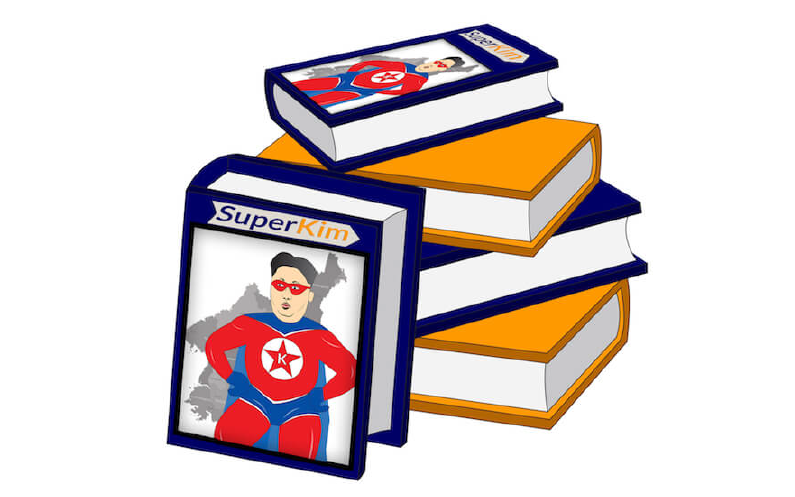 In his memoir or childhood hagiography, Reminiscences: With The Century,  readers are treated to fantastical accounts of Kim Il-sung’s heroic feats. From, “wrestling with a Japanese boy bigger than me who I got down with a belly throw” to “lining roads with spikes in order to tear the wheels of Japanese police bicycles”, the Great Leader’s childhood has been a series of valiant (and highly exaggerated) acts, conducted in service of the nation. Or so his memoir would have us believe. The Kim dynasty has been blessed, as the three men from childhood have exhibited genius like intellect, valour and foresightedness. Consequently, juvenile heroes are a mainstay in North Korean children’s literature.

In North Korean literature, the Kim patriarchs are always the heroes. Extraordinary men who straddle the fine line between heroic mortals and God with aplomb. The storyline is either extolling the Kim patriarchs or further indoctrinating “Juche”, their state philosophy. Many of these stories demonise Americans and the Japanese imperialists, often portraying them as cowering idiots who are no match for their Great Leader. The North Korean people do not need fantasy fiction. They have a superman, a batman, a scientist, a philosopher and a genius all bundled into one man. The Kims’ of North Korea are men of many talents who wear multiple hats. 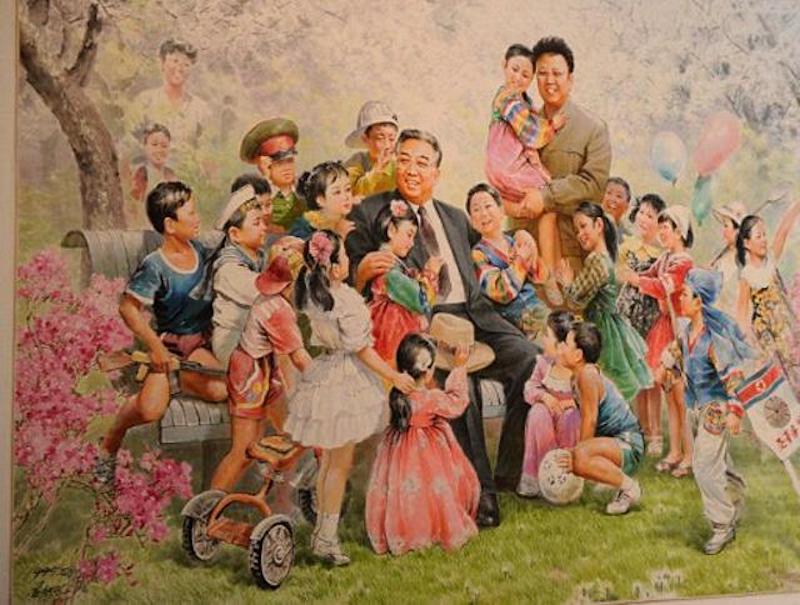 In Bul ŭi Yaksok (A Promise of Fire), a short story by Kim Il Su that appeared in the anthology of the same name in 2013, Kim Jong Un speaks of his father in reverential tones, praising him for his commitment to the people of North Korea, at the cost of his own health and well-being.

“A woman approaches looking distraught; Kim Jong Un recognizes Mun Suk Hui, the provisions supervisor of the nearby army base that KJ I had inspected that day. She has brought a single glove that Kim Jong Il left behind. Together they stare at the old, worn glove and KJU contemplates how his father always insisted on wearing a pair of gloves until they fell apart, having no care for his own well-being.

He remembers visiting his father’s room early that morning to welcome him back from a long inspection tour. He found the Leader slumped over his desk, his eyes squeezed shut.

“Are you all right?”

“It’s just my leg’s been bothering me a bit.”

“Shouldn’t we send for the doctor?”

“Don’t bother. It would just make people worry for no reason.”

His eyes grew moist. the General was a human being after all. He had aches and pains just like ordinary people. But it tore at his heart to watch him suffer in silence alone.

The above excerpt insinuates that the Leader put the concerns of the nation above his own. In reality, this is far from the truth. The Kims live in a world of palaces and luxury yachts. Portraying them as selfless individuals committed to serving the nation and its people, was an outright deception. In a country where citizens are allowed no outside engagement, being fed a constant diet of lies and deceit can be dangerous. They come to believe these carefully concocted lies as truth and accordingly place their faith and trust in a leader who is not even a shadow of his projected image. 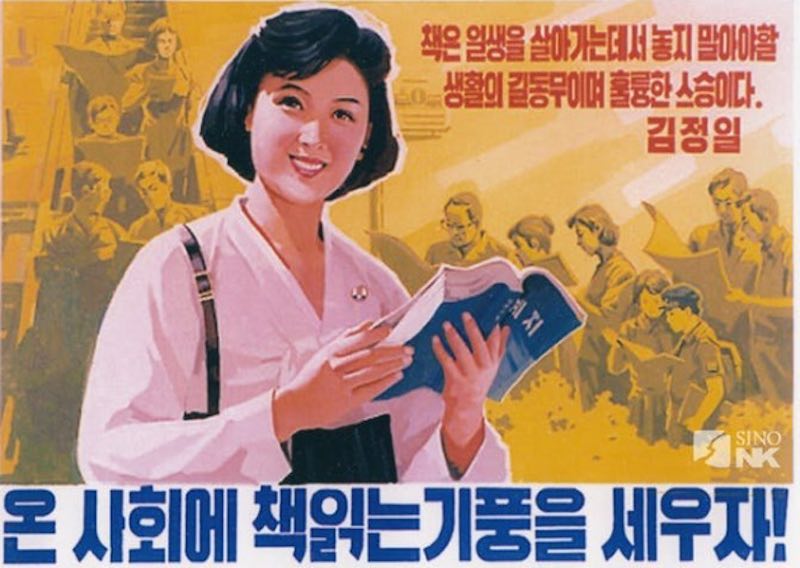 A North Korean propaganda image proclaims, “Let’s establish the habit of reading all over the country!” (Source: The New European)

In P’iyŏnanŭn Kkum (Blossoming Dreams), a short story by Kim Il Su that appeared in the literary magazine Chŏngryŏn Munhak in January 2017, we get a glimpse of Kim Jong Un’s extraordinary ability to spot talent, especially in young pupils who have been overlooked by their teachers and parents.

“One day, Professor Yu is setting up for class. As he opens up his lecture book, he seems to pause and frown distractedly at something before hurriedly putting it aside. It’s just a momentary pause, but the eagle-eyed young Kim catches it and notices that his normally stoic professor seems slightly out of sorts.”

No opportunity is lost to portray “young Kim” as an extremely observant and sharp child. Also, this is sometimes so subtle that the reader comes to believe it without contest.

“After class, Kim stops by Professor Yu’s office and asked about the incident. The professor confesses guiltily that he had unexpectedly found his son’s school workbook stuck in his lesson planner.” Comrade Kim Jong Un flips through the book and is immediately able to hone in on the young boy’s talent. “These are quite interesting drawings,” He remarked, to Professor Yu’s astonishment. “A good drawer must have a sense of spacing, form, proportion and color, and Kang Myŏng’s drawings display all of these. In this one, ‘Happy Birthday Teacher,’ he captures each person’s essence through a single distinguishing feature. This is an innate talent.” He goes on, “Art forms the base of architecture as well. Artistry and architecture are said to complement each other…” Kim turns to the drawing “Spring,” and remarks on how skillfully the child was able to capture the energy of the sprouts coming out of the earth and straining toward the sunlight, in a simple pencil drawing. He scribbles a few notes in the margin, suggests that ‘New Sprouts’ would be a better title than ‘Spring,’ and hands the book back to Yu saying, “Please encourage him to continue. Perhaps I should pay a visit or write him a letter if it would help.” Professor Yu is deeply moved by the young Kim’s personal attention.”

Leaders with great skills have the power to move mountains. North Korean literature portrays its leaders as men who possess all the skills humanly possible. Such kind of biased portrayal has an undue influence on the minds of the people and can goad them into taking emotional rather than rational decisions. 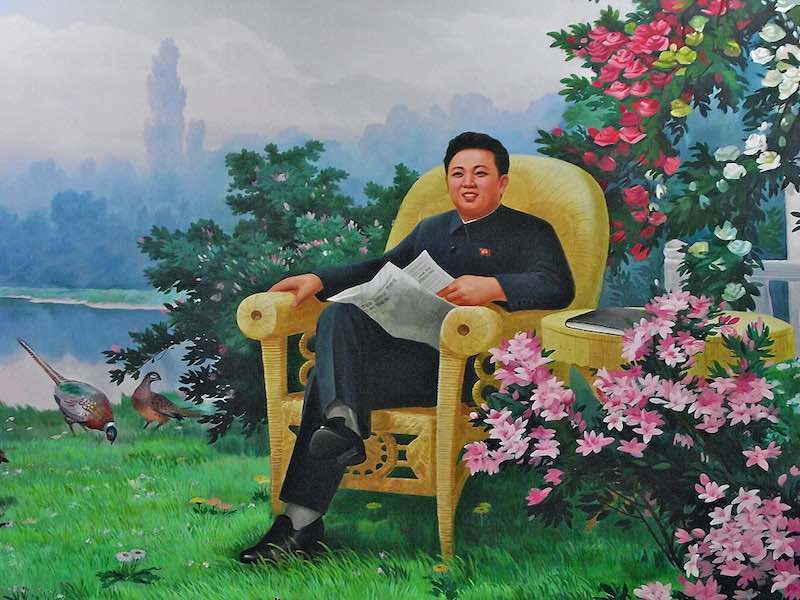 The ability to recognise and nurture great talent seems to be genetic. In Woori ui Meot (Our Flavor), a short story by Kim Ja Gyeong that appeared in Choseon Munhak in January 2013, Kim Jong Il wears the hat of a talent scout, par excellence.

“The Great Leader accepted their greetings one by one, inquiring about the state of the harvest and farm life. Then he glanced down at the young female student who was clinging to his arm and stomping her feet.

“You dance well. What’s your name?”

At the Great Leader’s question, the student answered in a clear pure voice, “I’m Ri Sun.” The name was as gentle and beautiful as her face.

The Great Leader further pressed, “You seem to be a middle-school student. What do you want to do when you finish school, eh?”…

Ri Sun furtively glanced at her companion. Her eyes seemed to say, “What should I do?”

A woman who had just moments earlier been beating a lively rhythm on the clay pots stepped forward graciously. “Great Leader, she is my daughter. She loves singing and dancing, so she wants to become a teacher in our village school.”

The Great Leader smiled at the woman’s simple response. “I suppose kindergarten teachers have to be able to dance well. But Ri Sun has the brilliant talent of a real dancer. It would be more appropriate for her to train as dance performer.”

The woman gasped in amazement, overwhelmed at his words.”

This is another instance of how the Great Leader, due to his inert ability to spot talent, helps ordinary citizens achieve their dreams. Other than the fact that this might be a complete lie, this also colours the judgment of the people and makes them view the leader with a misplaced reverence. A North Korean defector who lived in the country until she was 15 has described how she was brought up to believe that leader Kim Jong-Il was “a god” who could read her thoughts. In an interview, she said, “I had to be careful of my thoughts because I believed Kim Jong-Il could read my mind.” 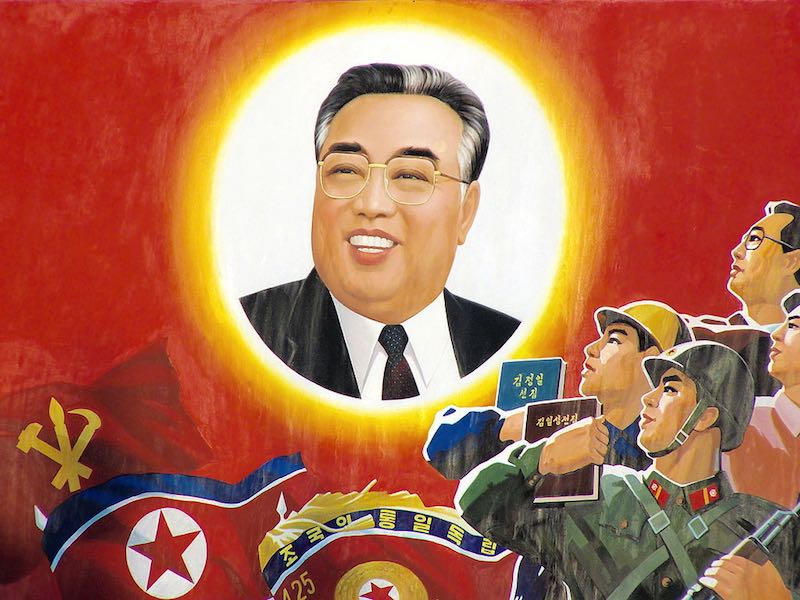 The Eternal President being adored by the public. By yeowatzup [CC BY 2.0 ], via Wikimedia Commons

The Leader And The God

Not only are the Kim men depicted as men with superpowers, they are also often laced with elements of divinity. For instance, there is this line from Rim Byong Soon’s treatise Thoughts about God: “If there is a God, he would appear pathetic in comparison to the boundless foresight, generosity and wisdom of our General… The God that exists in the faith of religious people is a mere illusion, but the absolute faith of our people rests in a real God, General Kim Jong Il.”

Such are their talents, that unlike mere mortals, the Kim men continue to achieve great feats from beyond the grave. In 1998, the corpse of the “Great Leader” received a promotion to the post of the “Eternal President”. Similarly, after Kim Jong Il’s death in December 2011, he was elevated to the giddy heights of “Eternal General Secretary”.

There is great power in the written word. It can shape ideologies, influence generations and impact humankind. Written in reverential tones and with exceptional uniformity, North Korean literature functions like a weapon of mass destruction. By influencing the minds of the people through lies and half-truths, literature is playing a key role in annihilating the individuality of the citizens of North Korea and tethering their freedom.