Naked Beneath The Midnight Sun

As she watched the two boys tucking in, she wanted to laugh, but she switched this yearning to one for music and felt like singing out loud; some song befitting the morning hours. Every morning her father switched on the radio; an old and joyous habit, and it would belt out songs from Hindi movies, a daily anthem along with the birdcalls at dawn. The radio had been the one constant. She made herself a quiet promise: she would go into the woods that very evening, with Ivar or Anna; Terje and Gunn could also be asked. Herbert, or Harry as he fancied himself, an American, was also adorable, and a masterful joke-teller. She would find herself a companion or two that very day. She became surer as she returned to her internat to wash out the jam stuck between her teeth, leaving Terje and Ivar to wipe their plates clean.

That very day, later in class, Suchu decided to put out her yearning for the woods out loud, hoping Ivar would take the bait. “Is anyone willing to go into the woods this evening or afternoon? No electives today.”

Terje was beaming. He sat with the group occasionally at dinnertime, and was picking up English rapidly, able to converse better and better. He believed, admittedly, that time spent with an English-speaking group, thanks to Suchu, would surely improve his job options. He listened to English songs regularly too, and shared some of his chosen melodies.

They continued chattering even as dusk descended upon this company, but a walking companion for Suchu was yet to be roped in. The dinner bell sounded at 18 hours and Suchu decided to forego her plans to explore the woods that evening, seeing how the ink-like darkness stained the grass and washed over the window  panes.

Another young man, Erik and his girlfriend Hildur, invited Suchu to the woods with them the following day, as they discovered her sitting on the fringes of it. She was staring into the yonder, gazing wistfully at the treetops. The mistiness that lay beyond, sent out an invitation. It was incurable, and irresistible. They had heard of Suchu’s aspiration to visit the woods from Siv of the Medialinje.

So after another attempt at working wood, Suchu headed out with the young couple, warmly wrapped in a jacket. The temperature of the woods would be a lot colder. She borrowed Gunn’s jacket, as none of her own were warm enough for these climes. She would soon have to go shopping, and she was excited to do so, as it was an excuse to explore further, and to go gallivanting in Oslo too, perhaps. She dared not inform her parents that part of the money in her small money belt was to be used for clothes. Suchu loved shopping for clothes. Here, she was counting on her local friends to guide her to streets similar to ‘fashion street’ in Delhi, where one got many a bargain by haggling and winning the lowest price.

Suchu begged Elin to accompany her with Erik and Hildur, whose acquaintance she had barely made. Elin readily agreed to go along, but when the hour to head out struck, she disappeared, saying she had forgotten something that needed her immediate attention, leaving Suchu to her own devices. The girl gathered her eager spirits and went along. The couple was very pleased to chaperone her, they announced.

Once at the edge of the woods, Suchu held her breath. She smelled the pine and took it all in. Erik and Hildur showed no signs of stopping to do likewise and strode on merrily, hand-in-hand. Suchu hurried on too, lagging behind. She stopped every once in a while. The woods were indeed dark and deep, and her senses were taken with various fragrances arising from the bed of moisture her feet trod on. The music made by birdcalls fell in cascades, upon her ears. Her head spun. Her spine straightened as she tried to take it all in, with her very breath, her eyes, and her entire being. An unknown thrill coursed through her.

Is this real, she asked herself. The magnificence of it all was more than she could have ever imagined. Each bough was bathed in the light of the setting sun: a glow like none other. It was as if the gods had pressed a tube of golden paint and let it run all around, trickling on to the leaves and the earth. Magical was a word that struck her heart again and again. Yes, it was spellbinding.

As they ventured deeper into the woods, Erik, who was waiting, turned around and asked, “So, Suchu, you like it here in the woods? You hear Beatles song Norwegian Wood? Very good no, am I right?”

“Yes, I’ve heard the song. And this, right here, where we are, it’s beyond beautiful, it is,” sighed Suchu wistfully, in response.

“Beyond beautiful?” Hildur quizzed, joining them in a trot. “Meaning?”

The need for silence was sensed, so they continued the stroll, meandering away from one another. The patches of light got fainter, guiding them away from the damp areas, marking the paths they ought to follow.

Soon, Erik and Hildur indicated it was time to commence the return journey. As the hush of the dying day made music with their rustling footsteps, keeping time at bay, Suchu, moved to the core, shed a tear. She had to share the magnificence she had just lived with Beenu, or her parents perhaps. What about Bhuvan? Would he appreciate this beauty painted in her words? She had yet to write to him, as promised. Perhaps she could begin with this experience as simply as she could. Beenu would be enthralled, particularly since she was as much a lover of nature as herself.

The woods had called on this fine day, and her being had responded. Now she would revisit as often as she possibly could. A quiet peace overcame her. It was nothing like what she had experienced earlier. It had all gone soundless: her anger, the overwhelming desires, her quest and ambition to outwit her parents and prove to them that she was one up on them, her wish to master it all in one day and rush headlong into the unknown future. This blank emptiness that seized her was beyond her comprehension, yet delightful. It was as if the burden of thought she carried, that which hounded her incessantly, had been eradicated forever. She felt nothing, but for a sense of infinity.

I could die right now, and regret nothing.

“Do you come here often, Erik and Hildur? Like once a day, or—?”

“No, we come after class, two or three times a week, when we want quiet. Hildur is painter, you see.”

“Oh, that’s nice. Hildur, what do you paint? Nature, I suppose,” Suchu offered.

“So you paint just about anything depending on your mood. Do share some of your work, won’t you?”

“Bra? Surely you mean, it’s all right?” Suchu was giggling.

“Bra, in English, you know, means your underclothes,” said Suchu, touching the side of her chest, pointing at her breasts. “The support for your breasts!”

“Aaah so, I understand,” Hildur laughed. “Next time, no mistake.”

They were out of the woods now, and as they approached the back entrance, she thanked Erik and Hildur, and they hugged her warmly before parting. Their warmth and the physical interaction was new and surprised her. “Ha det bra, Suchu!” they smiled and said to her knowingly.

In turn she yelled out, “Ha det bra too, you two. Takk takk takk!”

Back home, hugging would be only between lovers and very close female companions. Here, everyone hugged, even mere acquaintances. This was new to Suchu, and it was pleasurable. She not only did not mind, she loved it. A sense of belonging and love arose in her being.

What did friendship mean, in fact? Here or back home? Someone loyal and fun? Someone who could be counted on? Was she a good friend? Here, people hugged, laughed and shared knitting needles and smokes. A tickle and then some laughter gurgled within her at the differences. Oh wouldn’t she love to be this honest, loving and giving friend! No one seemed to doubt the other, because being nice was a way of life. Unusual. She stood apart as a foreigner at the moment, but ideally, she would want to stand out as a person of integrity, become a friend to more than just Ivar or Elin; especially to Sam.

In any case, it was easy enough to be nice, rather than to sit apart and judge another. What may be considered right or wrong behaviour back home was clearly not so in Norway. Thankfully the rules and mindset didn’t exist in this country. She was free to do as she pleased, yet she felt bound hand and foot by invisible ties that held her back. But from doing what exactly? As soon as the word ‘home’ whispered in her mind, she grew perturbed, and negative thoughts pervaded her; her parents squabbling, an image accompanied by acute disharmony, returned in full force. The spiritual journey in the woods hastily beat a retreat. 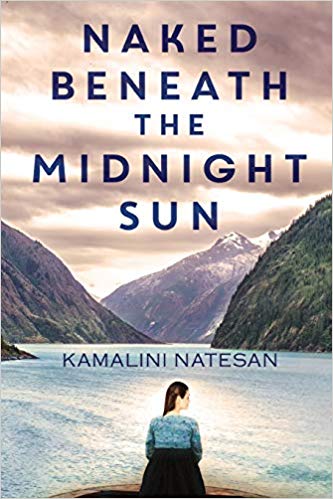 Not only a writer, Kamalini is also a trained Indian classical singer and a teacher of French and Spanish. She regularly jams with a group of musicians. Her short stories and articles have been published in magazines, blogs and journals such as Parenting, New Woman, Café Dissensus and Coldnoon. Recently one of her essays, entitled Probing The Dermis, was published in a book – Twilight’s Children, Chronicles Of Uncommon Lives. You can follow her blog, here.

Excerpted with permission from Naked Beneath The Midnight Sun, Kamalini Natesan, Olympia Publishers, available online and at your nearest bookstore.