‘It was in 1947 when we undertook that perilous journey, the nightmares of which haunt us to this day,’ he began. I was surprised to see that he had a whole talk prepared. What was going on in his mind?

We nodded. Lalaji often spoke about his life on the other side of the border, still affronted that his family had to pack their bags and leave from what was always their home.

‘How Anarkali Bazaar would come alive during the day, especially when it was festival time. Rows and rows of shops and vendors selling everything, and amongst those were we too. My father worked very hard to buy one of those shops, and we finally managed to do so. We owned a small shop, and the future never looked better. Two years later, however, we had to leave it all. It was the most devastating moment of our lives. We made that journey in complete shock, not knowing what would happen, not knowing what we would do, camping at one place, then another. We finally reached Ludhiana and stayed there for some time, until we were finally allotted this place in Siyaka.

‘It was not too bad, mind you,’ he continued, ‘we got enough land for a house and a shop. It was quite enough. But a small shop in Anarkali Bazaar was still worth ten shops in Siyaka—this town was nothing! There were hardly a few families living here, most of it was farmland. What would I do selling our famous Lahori sweets here? It seemed like we had lost everything, for some time.

‘But with my father urging us on, asking us not to lose hope, we began again. We built it all up, brick by brick. Even this house, we made it on our own. Siyaka too became a thriving town—we got lucky there—and after a few years Lallan Sweets was running.’

I glanced at Pappu Uncle. While he might have known more of this than us, we still didn’t know why Lalaji had decided to bring it up now.

‘Some things helped us, of course. Our magic ingredient being one! Our location, the fact that people here were much more supportive, the local government not so corrupt; we did well. The pinch of salt we always add to our laddoos, not everyone thinks of doing that you know, is always appreciated. Lallan Sweets is the labour of love of not one generation but two, an effort at trying to rebuild all that we had lost due to the cruelties of fate. I don’t want to see it crumble again.’

Pappu Uncle put his hands on the table and pushed his chair back. ‘I see what this is about. About our talk yesterday, isn’t it? You don’t trust my sons to handle it, do you? What? You want Taru to take it on—or perhaps her mother?’

Aunty looked at Pappu Uncle in horror. We too were shocked at this sudden hostility. There was always some jealousy and rivalry between us, but it was always concealed beneath a veneer of friendliness. Nothing was spelt out in this manner.

‘What about us then?’ Pappu Uncle continued. ‘My two sons? They will have sons and wives too, children they have to feed, families to take care of—you want to give Lallan Sweets to Taru who has no credibility at all, who might run off with the next DJ she finds, dishonouring the family name!’

‘Pappuji!’ my mother stood up, indignated. ‘Please mind what you are saying, I will not hear my child being spoken ill of like this!’

‘Pappu, enough!’ Lalaji said, putting his hand up. ‘I’m not finished yet and you’re not so wise yet to be able to interrupt your father.’

Pappu Uncle went as red as it was possible to, his bald head looking like it would explode.

‘The time has come to settle the matter,’ Lalaji went on. I bent forward.

‘I will not bear to see any injustice happening to my grandchildren, be it my grandsons or granddaughter. There might have been a time when girls were not considered important-enough members of the family, but, Pappu, I am not barbaric, and I hope to God you are the same. No, and now I will tell you how it will work, something that my own father did for me: Lallan Sweets will not be inherited at all.’

‘It will not be inherited. It will be earned.’

‘And what,’ I asked, clearing my throat, ‘exactly will we have to do to earn it?’

Lalaji looked at me, a wide smile on his face. ‘You’ll have to find out the magic ingredient, of course.’ 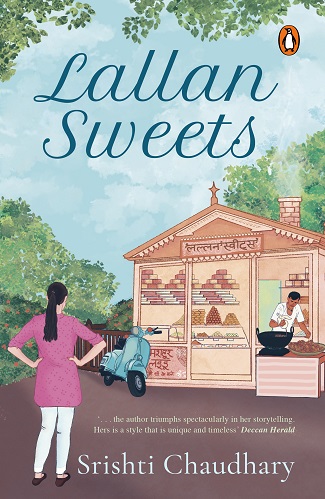 Srishti Chaudhary was born and raised in Delhi, and studied English literature at Lady Shri Ram College and Creative Writing at the University of Edinburgh. The author of Once upon a Curfew, she also has a series of short stories to her credit. She has also written for BBC Travel and National Geographic, among other publications. She wishes she had a cool signature, the apparent prerequisite to being a writer. For more about her, you can visit www.srishtichaudhary.com.

Excerpted with permission from Lallan Sweets by Srishti Chaudhary, Penguin Random House, available online and at your nearest bookstore.