Books And Screen Time: Striking The Right Balance For Your Child

As new parents (nearly eight years ago), we received many wonderful presents from our loved ones. I remember being so thankful for the cute baby clothes, accessories, adorable toys, baby books, and blankets. Our loveable bounty also included a book, not for our newborn, but for us. It was John Medina’s Brain Rules For Baby: How To Raise A Smart And Happy Child From Zero To Five.

Since it was rather hard to ignore a book with such a compelling title, we read the book from cover to cover. And I am so glad we did. It was informative and insightful. Predictably, the book enumerates all the things parents could do to bring up happy infants who eventually grow up to become smart and emotionally well-adjusted children. We learned about the importance of good nutrition and sleep, physical demonstration of love (like hugs), the power of talking, listening and reading to the baby, even in vitro. While a lot of these parenting practices are relatively intuitive, the book helpfully reinforces them. 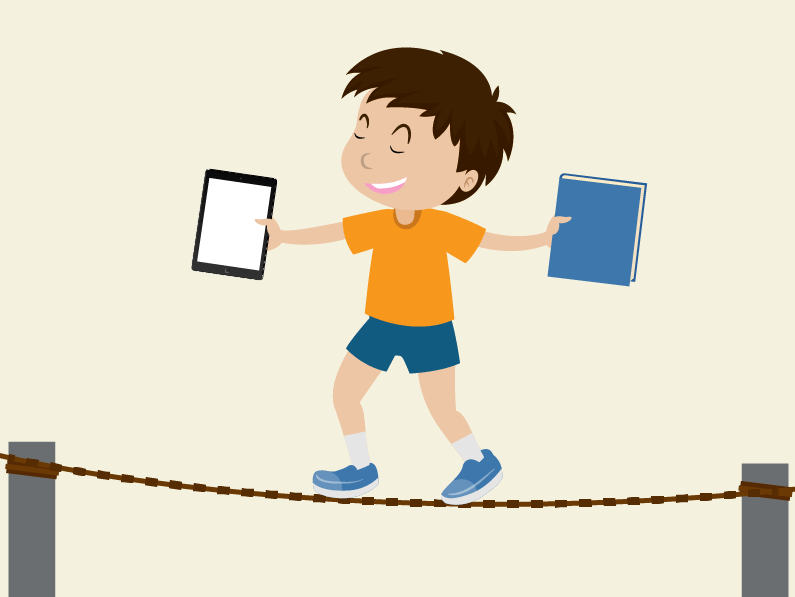 No Screen Time Before Two Years Of Age

The one takeaway from Medina’s book that stood out more than others was the emphasis on zero (that’s right!) screen-time for babies until the age of two, and limited (about an hour a day) screen exposure after that.

Being a developmental molecular biologist and researcher by profession, Medina’s thesis is scientifically anchored. It connects neuroscience with our sensory perceptions of reality. According to him, it’s important to let children experience their surroundings in a “real” way rather than through a screen. The screen leaves nothing to their imagination and blasts their developing synapses and nervous system with more images than their little brains can handle. It can also contribute to emotional and behavioural issues later.

Given the scientific research around screen time, the whole no-screen policy resonated with us. As a result, we became a no-screen household. This meant no screens in any of their avatars: television, cellphone, iPad, Kindle, or even smartwatches. We stood our ground, unwavering, even when we would look wistfully at some parents enjoying a peaceful meal at a restaurant while their toddler sat staring at some moving image on a cellphone. And our baby? He wanted to eat everything off our plate instead of busying himself with the kiddie book we had handed him in lieu of our cellphones. We took turns eating alone while one of us took our little monster for a stroll outside the restaurant. Comical and painful as it sounds, this is no exaggeration. Needless to say, the lack of captivating screens eventually made our children settle for distraction through books.

But here’s what no-screen time bought us: we found joy and wonder in discovering beautiful children’s books with our little ones. Pat The Bunny was the first one we explored. Goodnight Moon was part of our bedtime routine for a long time. Chicka Chicka Boom Boom introduced the alphabet to our little ones in a fun way. The Very Hungry Caterpillar introduced our babies to healthy eating habits and counting, while also teaching them about the lifecycle of a butterfly. Later our repertoire of books included The Giving Tree, The Rhyming Rabbit, The Tawny Scrawny Lion, and all the humorous Dr. Seuss books like The Cat In The Hat and There’s A Wocket In My Pocket.

There is, indeed, a certain beauty in watching your 18-month old flip through pages “reading” Brown Bear, Brown Bear “by memory”! If books and toys are a prime source of entertainment for children, they naturally learn to interact with them. You really don’t need screens. As a bonus, books help children develop a rich vocabulary, and they learn the art of conversation. As explained by Medina, books and toys, as opposed to screens, wire them to be comparatively calmer and more composed infants, toddlers, preschoolers and school-going children. 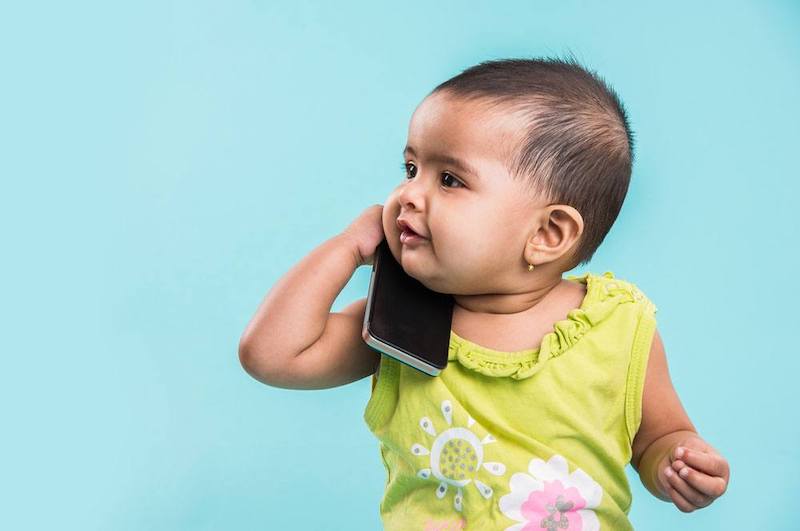 (Image via The Indus Parent)

While a no-screen policy was going well for us, there came a time when we felt that some amount of positive screen time for our kids may be beneficial. Around the age of four or five, their friends started talking of intriguing T.V. shows that our children had no clue about.  Full disclosure, nor did we! According to noted psychologist Jocelyn Brewer, after a certain age, not having access to the digital world negatively impacts children.

After some digging around, we found some great educational kids’ shows like Octonauts, Super WHY and Brainchild. Of course, there were some misses like DinoTrux. It’s a fact that showing children a video of a hydrothermal vent in the Mariana Trench definitely makes it more tangible for them than showing them photos or reading about it. Not to say that the latter shouldn’t be done, but it can certainly be complemented by some visceral visual aid, thereby, taking their learning and curiosity to the next level.

Likewise, we also discovered some interesting learning apps like GoNoodle Kids, Handwriting Without Tears and Endless Alphabet, to name a few. These not only supplemented our children’s academics, but they were engaging enough to occupy them meaningfully. This opened a window of opportunities for us as parents. Think: a peaceful coffee break; a catch-up call with a friend… You get the drift!

Once you start searching, it becomes apparent that there is a world of kids’ entertainment out there. One that includes delightful movies like Sing, Zootopia, and Coco. Films like these address thought-provoking social issues like tolerance and do a good job of revving the kids’ imagination in many ways. Some of these images and movie scenes are often ‘played out’ by our boys in numerous make-belief scenarios. Plus, exposure to some amount of pop-kid culture has made our preschooler and first grader socially at par with their peers as well.

Now, without any guilt, I’m quite pleased to hook up my boys with one of these “kid-friendly” screen-mediated options for an hour while I take a break! Screen-time can also be used as a nifty reward tool. Since access is limited and infrequent, I end up using it as a reward for good behaviour. 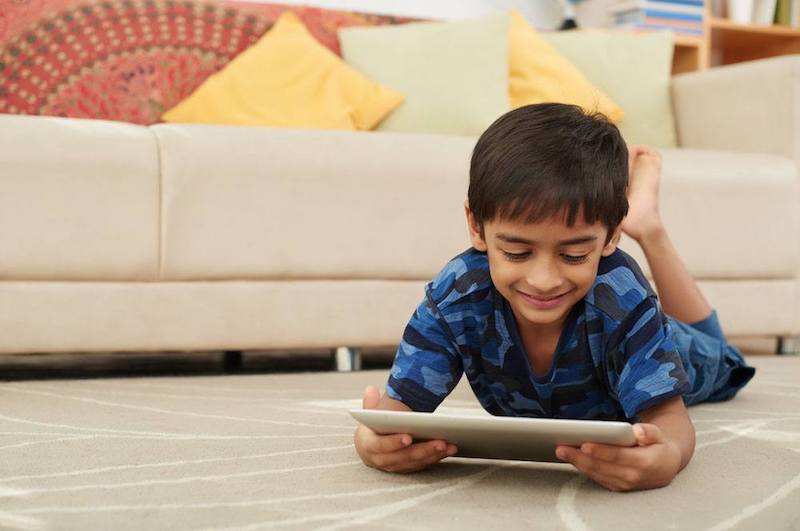 (Image via The Indus Parent)

So, using screens to calm an irate toddler would be considered a no-no. Exposing the same toddler to educational content when s/he is calm and receptive would be a yes. Brewer considers the former an unhealthy screen relationship as it teaches children to use screen-time to placate or distract themselves when faced with an unpleasant situation or emotion.

We had the good fortune of never having to deal with an inconsolable tantrum-ridden toddler when his iPad or cellphone was taken away from him. But we didn’t gain these bragging rights without effort.

Exhausting as it sounds, it’s worth it in the long run. The silver lining is that there is light at the end of the tunnel- once children turn two. That’s when you flip out the screen and present your little ones with some age-appropriate food for thought on a screen for an hour or so every now and then. They’ll love it and so will you!

To quote Brewer, “It’s important there is balance in the online and offline worlds and in leisure and learning…” And it’s up to parents and primary caregivers to define that balance for their children. Because that fine balance is likely to mould their brains and behaviour for life.

Do you limit screen time for your child? What do you think is the appropriate amount of screen time? How do you keep your children entertained? Share with us in the comments below.