It is no secret that dystopian literature is becoming increasingly popular, perhaps that is because it helps us make sense of our reality. And what better way to explore dystopian worlds than to do it through graphic novels, which don’t just tell but also show us what a dystopian society can be like. Here you’ll find a dystopian graphic novel in which a world is controlled by technology and one where an STD can make you beautiful. You’ll also read about a society where human beings have given in to their basic instincts and one where male mammals are virtually extinct. 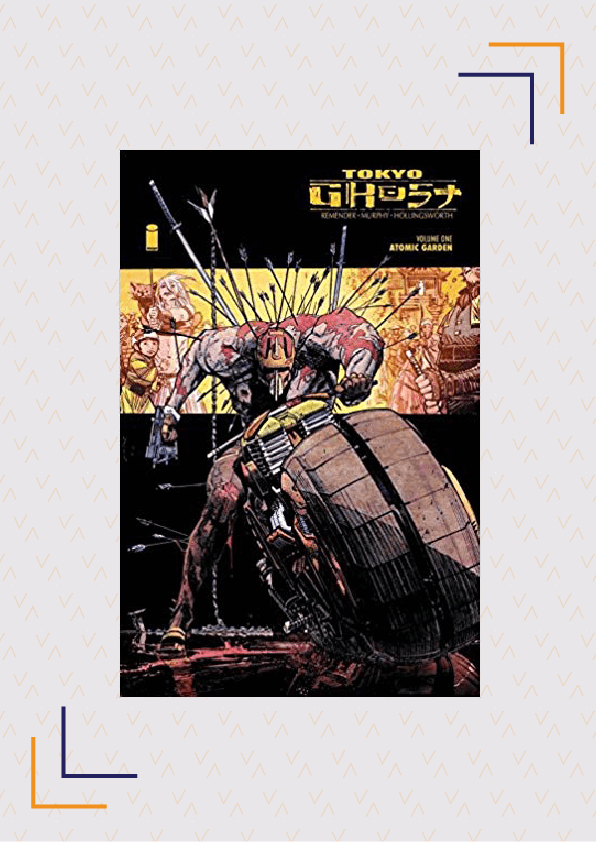 In 2089 Los Angeles humanity has become addicted to technology and people are always on the lookout for their next “virtual buzz” to escape the reality of their wrecked world. Gangs control the best technology and turn to “constables’ when they need their rules enforced. Constables Led Dent and Debbie Decay are given a job that will take them into the garden nation of Tokyo, the last technology-free country on the planet. Decay sees this as an opportunity for a fresh start and what follows is a story filled with violence, love and heartbreak. Tokyo Ghost is particularly chilling because it hits close to home as we often find ourselves turning to technology and entertainment to escape our reality. 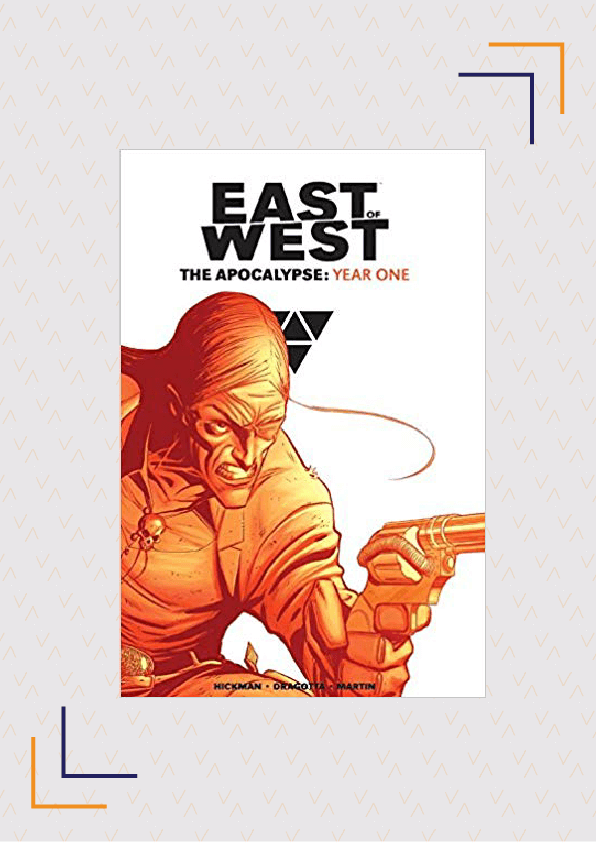 In East Of West, the Union, the Confederacy, an African American kingdom, a Native American confederacy, Chinese exiles and Texan separatists were all at war with each other until a comet hit Kansas in 1908. Subsequently, the six parties meet at Armistice to form The Seven Nations Of America. On the same day, there were two prophecies and the Four Horsemen of the Apocalypse are now trying to fulfil them to bring about the End of Times. The Horsemen are assisted by the “Chosen”, a group of their followers who intend to bring about the apocalypse. However, their plans are derailed when Death falls in love. East Of West is a story of politics, love and betrayal. It’s a complicated read but well worth your time. 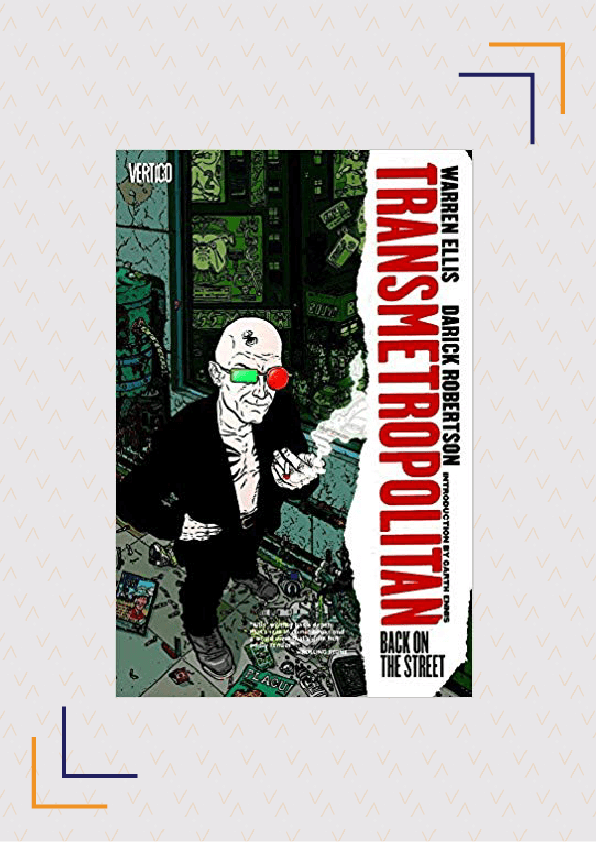 In this dystopian world, humans are mass-cloned, people mutate themselves into alien species and climate change is all too real. Reclusive journalist, Spider Jerusalem, returns to a job he doesn’t like and to a city he despises. Transmetropolitan tells his story as he dedicates himself to fighting corruption and abuse of power in 23rd Century U.S. With his two sidekicks, Yelena Rossini and Channon Yarrow, Jerusalem investigates stories in The City and pits himself against two major political opponents. Transmetropolitan is a haunting depiction of modern-day politics despite being written in 1997. 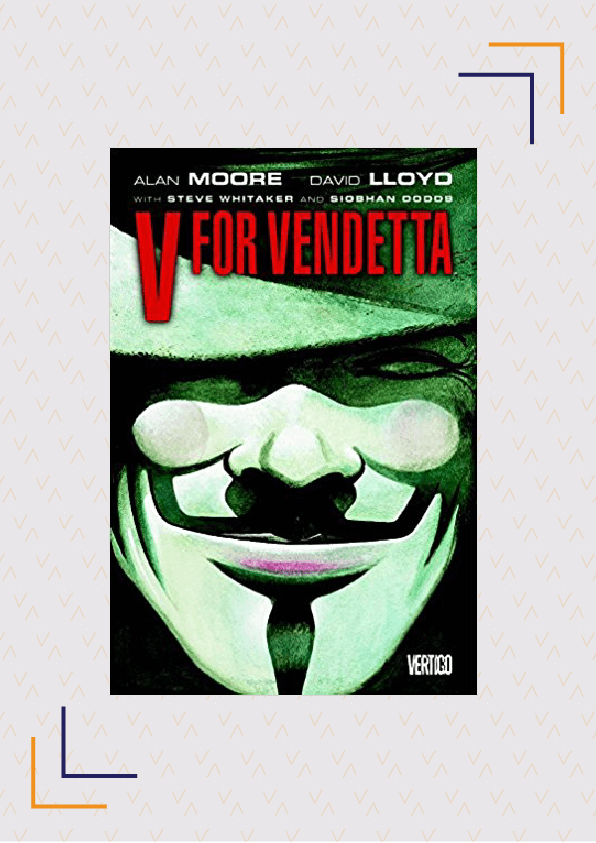 Alan Moore’s classic, V For Vendetta, is set in a post-apocalyptic, dystopian U.K., ruled by a fascist party that has established a police state. The main character is ‘V’, an anarchist revolutionary who wears a Guy Fawkes mask and is determined to overthrow the government. ‘V’ is also on a personal quest for revenge against the people who conducted a cruel chemical experiment on him. Eventually, he engineers a chain of events, which will guarantee the end of the government. This dystopian graphic novel is dark and gritty and will show you that sometimes one man is enough to take down an entire government. 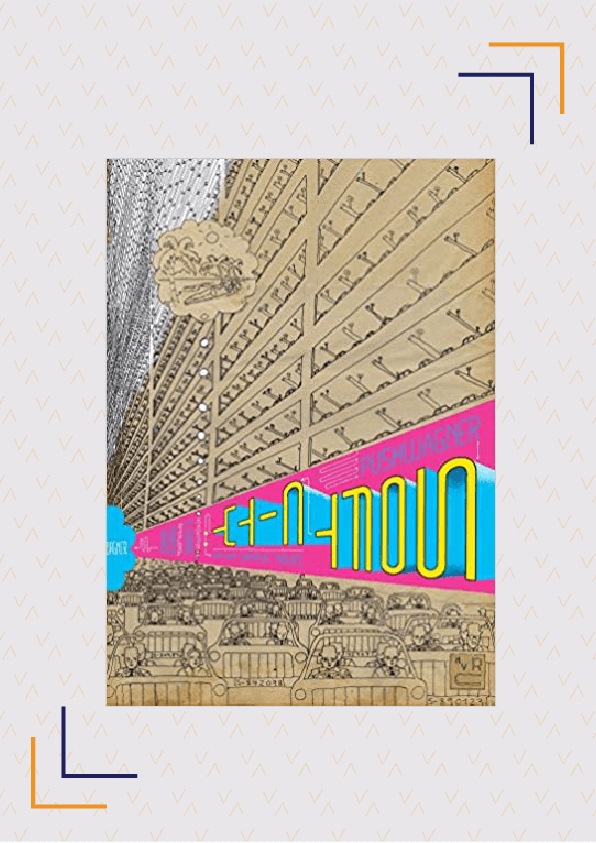 Pushwagner’s Soft City is set in Norway and unfolds over the course of a day. In this dystopian graphic novel, a corporation controls every aspect of people’s lives- it employs them, feeds them, entertains and informs them. The story follows the day in the life of a family- the man, a husband and father who goes to work every day and his wife who goes shopping after dropping off her baby at the nursery. With its stark, minimal hand-drawn artwork, Soft City is a commentary on urban alienation. Interestingly, this graphic novel was originally finished in 1975 but was subsequently lost, only to be rediscovered in 2002 and finally published in 2008. 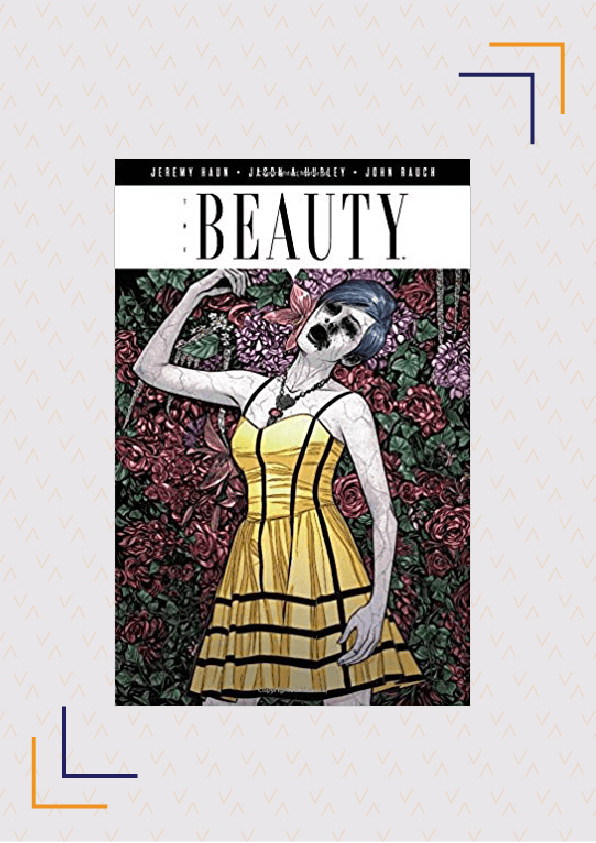 In this dystopian world, there is a disease outbreak- an STD that makes its host beautiful. In their quest to be beautiful, people are willingly contracting this STD. However, all is not as it seems as the disease causes its hosts to die brutally. The Beauty follows two detectives as they try to discover the truth behind the STD while dealing with corrupt politicians, federal agents and even a mercenary who is out to kill them. According to Haun, “At its heart, The Beauty is a morality play. We’re examining the lengths we, as a society, go to in order to look good.” This graphic novel will make you reflect on the cost of looking good. 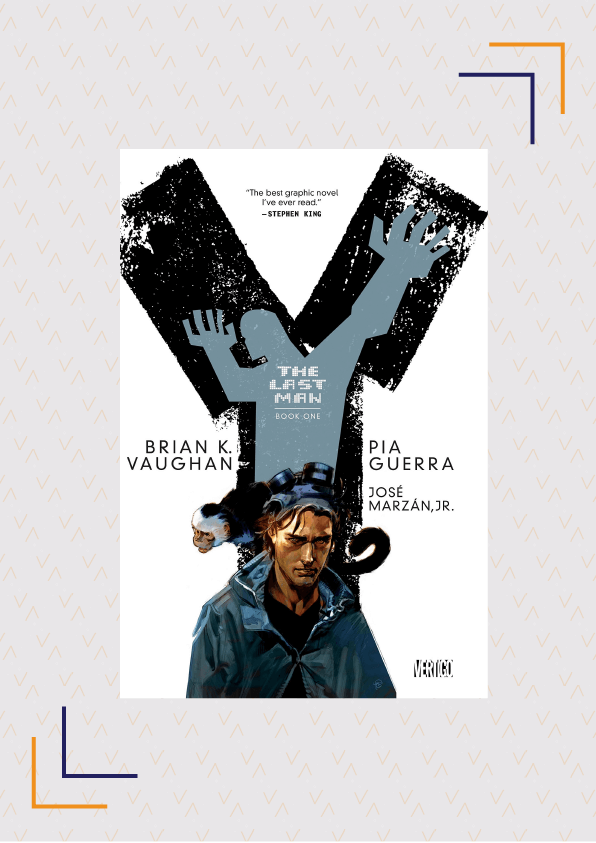 Yorick Brown and his Capuchin monkey, Ampersand, are the last male mammals in this dystopian world, as all other mammals with the Y chromosome have died due to a mysterious illness. Y: The Last Man follows Brown and Ampersand as they set off on a quest to find the cause of the plague, discover why they survived and to track down Brown’s girlfriend. Along the way, he meets different women, who are all dealing with this dystopian world in their own way. Y: The Last Man explores what would happen if there were no men in the world. 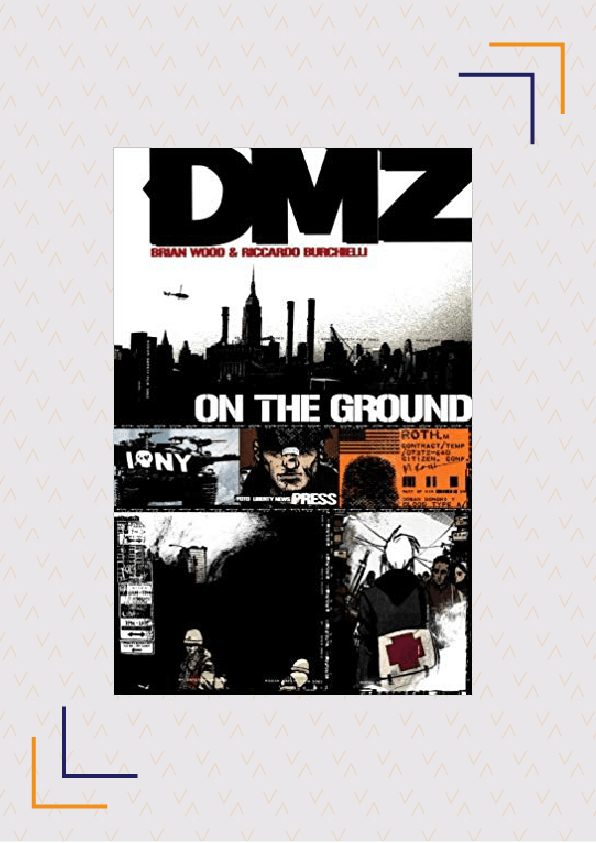 In DMZ, the U.S. government is fighting the “Free States” in a second Civil War and Manhattan is the titular demilitarised zone. The graphic novel tells the story of Matty Roth, an aspiring journalist, as he shadows a veteran war reporter into the DMZ. However, once the reporter is killed, Roth must choose between getting off the island or broadcasting the truth about the DMZ. With powerful storytelling and artwork that brings a war-ridden NYC to life, DMZ will show you the price civilians pay for war. 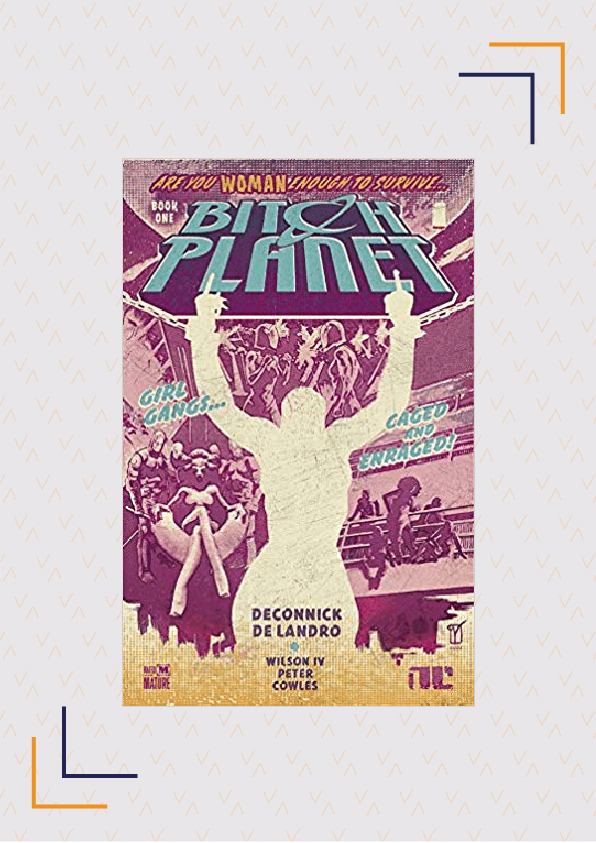 In Bitch Planet, women who are considered “non-compliant”, either because of their actions, their looks or their sexuality, are shipped off to an off-planet prison called the Auxiliary Compliance Outpost. This dystopian graphic novel explores the lives of women in this prison as they try to stay alive while dealing with crooked guards and hidden agendas. Bitch Planet is a feminist graphic novel that uses a patriarchal dystopian society to highlight the exploitation of women. 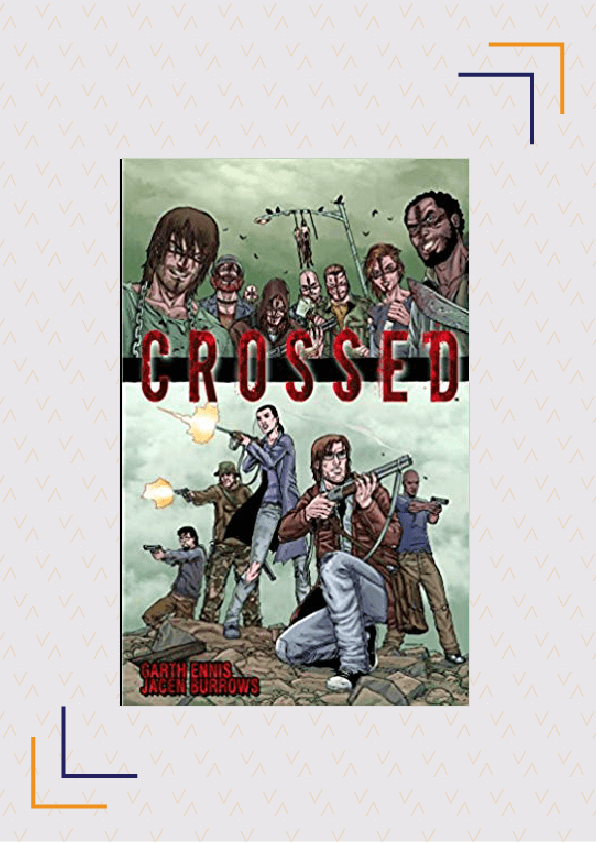 In Crossed, some humans are carrying out their most evil thoughts as the result of a mysterious contagion. These humans are called the “Crossed” since a large cross-like rash appears on their faces. As the virus spreads across the world, governments and the military are overwhelmed and entire cities have become wastelands. The story is centred around a small band of survivors who make their way across America. They are united in their determination to survive and the book explores how far they are willing to go to live. Not for the faint-hearted, this gory dystopian graphic novel will show you a world where humanity is all but dead and human beings are effectively an endangered species.