To Understand Feminism In India, Read Seeing Like A Feminist

During Independence Day week, speaking of the F-word is imperative. The F-word is political, compelling and extremely relevant in our time. This F-word, however, is not freedom, but feminism – a concept that is so mired in controversy in India and elsewhere, that a fair warning is often necessary before talking about it. In this piece, I will look at a very pertinent book on women’s rights in India, that talks about the introduction of a feminist lens while looking at issues concerning women in independent India.

Fair warning: The frightening F-word (feminism) is an important part of the book, and the women’s rights narrative. Please leave societal stereotypes, myths and assumptions and most importantly, your preconceived notions at home. 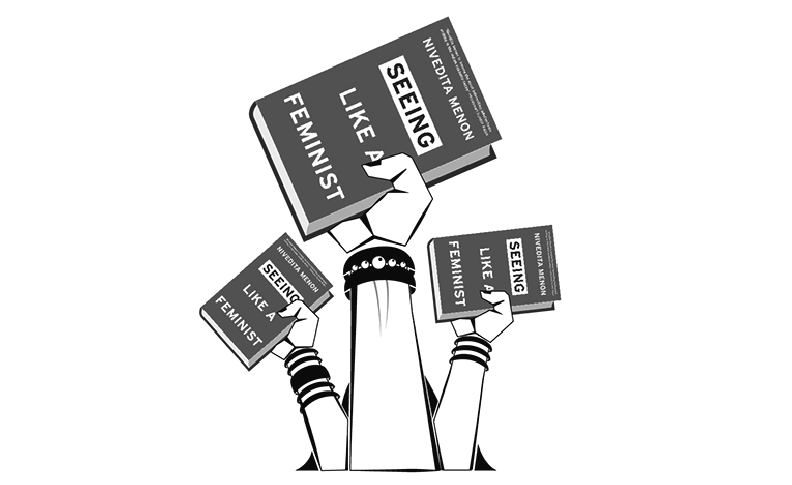 India is a cacophony of identities and a diversity of socio-cultural systems, and invariably, in this cacophony, the Indian woman’s voice is lost. Discrimination against women in India is staggering: one-third of adult women remain illiterate, marital rape is not illegal and is believed to destroy the sanctity of marriages, and sex-selective abortion and female infanticide, though illegal, are still widely practised. As women in India continue to be deified, they are not treated as human beings with dignity, therefore, growing into one’s feminism, in India, is a painful process.

After the Delhi Gang Rape of 2012, Nivedita Menon, professor of Political Thought at Jawaharlal Nehru University, would go on to publish Seeing Like A Feminist – a book I wish I had read when I began my journey into feminism. Her book provides an understanding of the women’s rights narrative in India and helps readers learn how to question the existing cultural and social norms in India. The book is an astonishingly brilliant basic primer to the feminism of the Global South, while culling out issues on women’s rights within India. For Menon, feminism “is not about a movement of final triumph over patriarchy, but about the gradual transformation of the social field – so decisively – that old markers shift forever”.

Menon takes on the portrayal of the positionality of women in India with a seemingly academic flavour, and yet maintains a cogency and simplicity throughout the text. She divides the book into six main chapters, that take on larger issues in India: Family, Body, Desire, Sexual Violence, Feminists and Women, Victims or Agents. Each chapter is an allusion to patriarchy’s role in women’s lives in India, and how the issues ultimately relate to the lack of autonomy and choice for women in the country. A significant feature of the book is that Menon cites numerous cases and narratives while explaining each concept, to provide for a contextual background of the issues. This keeps the readers interested; this is not your average academic work on women’s rights and feminism – it understands the audience and moulds its voice accordingly. Each chapter is riddled with examples of social realities from around the country to give us a comprehensive picture of what it truly means to be feminist. 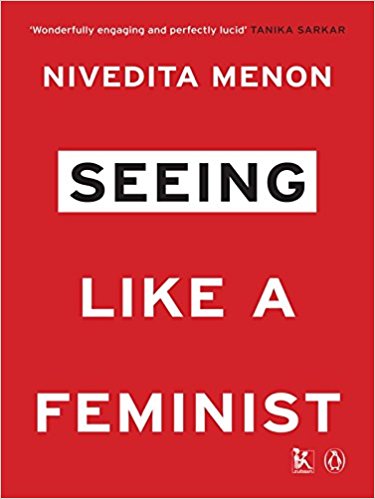 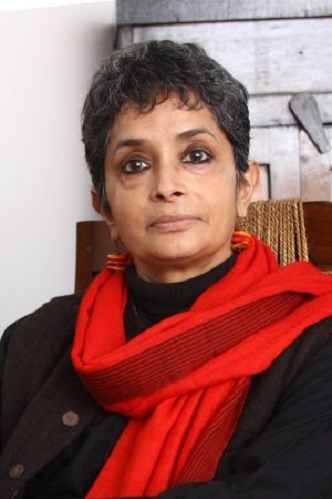 “[T]he whole point of nude make-up clearly is to spend hours painting your face in order to make it look like you had not touched it all. The maintenance of social order is rather like that[…] But the ultimate goal of all this unceasing activity is to produce the effect of untouched naturalness.”

At the beginning of the book, Menon compares the concept of nude makeup with the maintenance of social order. With this meticulous analogy, the reader is stunned; Menon is certain that this analogy will compel the reader to adopt the “feminist gaze”. Seeing Like A Feminist asks its readers to see “from the position of marginality [that] he or she has deliberately chosen to occupy, it is a gesture of subversion towards power; it disorganizes and disorders the settled field, resists homogenization, and opens up multiple possibilities rather than close them off.”

“The family is an institution that rigidly enforces systems of inheritance and descent, and in this structure, individuals – sons, daughters, wives, husbands – are resources that are strictly bound by the violence, implicit and explicit, of this frame. As feminists, we need to build up the capacity and the strength of both men and women to live in ways in which marriage is voluntary, and to build alternate non-marriage based communities.”

Menon questions the traditionalist and patriarchal definitions of family and marriage. This is especially thought-provoking because Indian parents bring up their children, by default, as cis-gendered and straight, and encourage them to covet a particular life where marriage and children must be at the centre of their lives. Having a family is equal to being “settled in life” – a standard most Indian men and women aspire to. 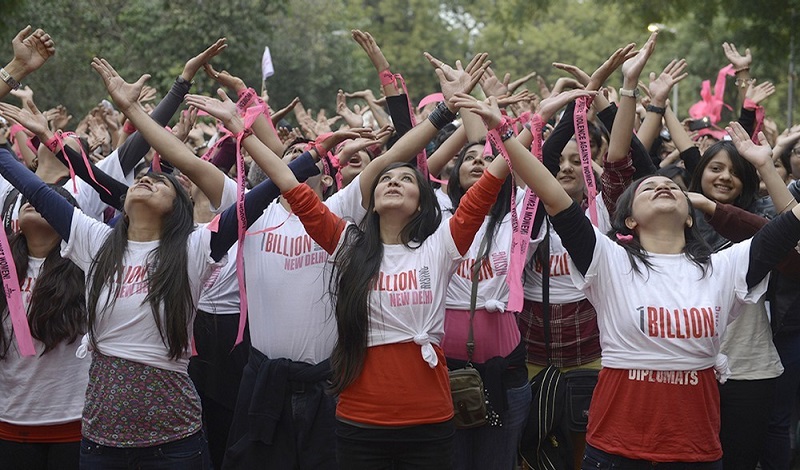 “Hence our preference for the term rape survivor rather than rape victim. Does the real damage of ‘rape’ lie in the web of meanings around it rather than the act itself? ‘Sexual’ violence has a potency that is greater than the actual violence of the act or the physical damage inflicted.”

“The feminist response to being called whores or chhinaal should not be to protest fruitlessly, ‘We are not whores!’ but to turn the insult around and ask, ‘What makes you think this is an insult? We refuse the terms of this insult.’ What if all women were to say we are ‘loose’—we are not tightly controlled—and if that makes us whores, then we are all whores. If we are all bad women, then patriarchy had better watch out.”

Another part of Seeing Like A Feminist that stays with her readers is how Menon questions the good woman/bad woman dichotomy in her book throughout, especially when she speaks of the sex workers’ movements in India. Menon urges her readers to build feminist responses to slurs that denigrate other women, especially because Indian women’s lives are built on the dichotomy: good, obedient behaviours are rewarded by patriarchy, while bad, rebellious actions are penalised. 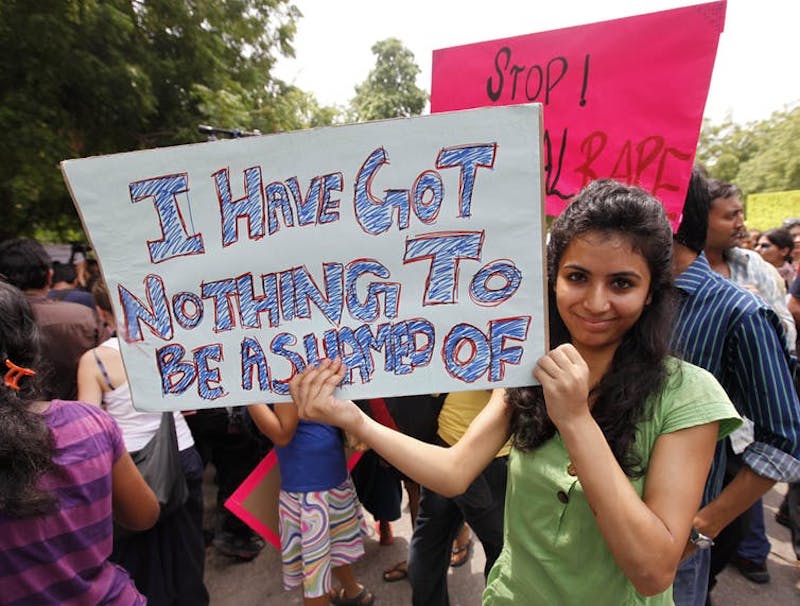 “Perhaps also, one body may, in one lifetime, move through many identities and desires. The use of ‘queer’ then, is a deliberate political move, which underscores the fluidity (potential and actual) of sexual identity and sexual desire. The term suggests that all kinds of sexual desire and identifications are possible, and all these have socio-cultural and historical co-ordinates.”

Seeing Like A Feminist also puts under the magnifying glass, the ways in which gender is performed in the heteronormative world, and this is especially important because while the legal system has begun recognising non-binary identities, the social order still discriminates against them immensely. However, feminism recognizes that gender is fluid, and our bodies are political, and this is particularly liberating.

“Nevertheless, feminist politics needs to be very suspicious of the domestication of gender through state policy and the spurious clarity offered by government policies on ‘women’ and ‘women’s empowerment. This clarity comes at the cost of solidifying existing patriarchal structures and cultures.”

In another part of Seeing Like A Feminist, Menon warns all proto-feminists in India to be wary of “women’s empowerment” projects in the country. Having worked in the NGO sector for a long time now, I found this bit especially interesting: why are all empowerment programmes for women? Why does empowerment mean the stabilisation of the same systems of power that marginalised the women? How is the patriarchy able to control women through such programmes? Menon’s work gives us an honest analysis of women’s empowerment projects in India, where organisations make money while making “victims” of women, while continuously divesting them of their human rights. 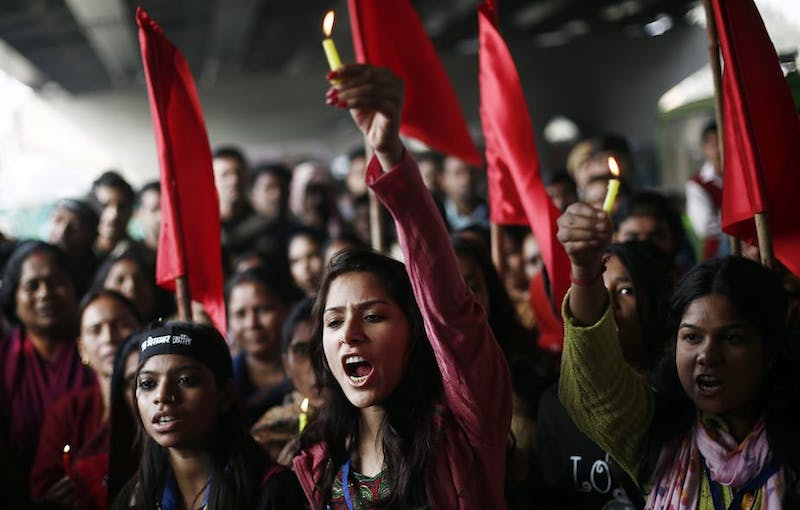 (Image credit: The Conversation)
Seeing Like A Feminist is critical at a time when women are at the forefront of both public and private spheres, but continue to be controlled by institutionalised patriarchies. Menon’s work is compelling, as it attempts to dismantle structures, ideologies, hierarchies, and rules through mere words. For the proto-feminist in India, it opens up conversations about women existing, interacting and struggling within the patriarchy; for the experienced feminist, this is a refresher, it is a reminder that as a feminist, one must always keep learning.

Menon is reassuring throughout the book. There is an outside to patriarchy, she notes, and the way is feminism – “Narivad, behna, dheere dheere ayyi! Feminism, sister, comes slowly slowly.”