In this short fiction, we look at a couple that has been married for a while. The protagonist, Amita, is worried that her relationship with her husband has become stagnant – the sort where he doesn’t really ‘see’ her anymore. But, it is never too late to rekindle the romance, and sometimes, revisiting the past is just the way to do it.

The voice on the radio, a familiar blare, ‘…and the winner is, Ludhiana’s Jeevan Samrat! Yet again, a lady winner from Punjab, no surprise!’

Amita frowns, why do people even bother calling! It’s such a drag, and who cares who wins. Only the winner does. She glares at the radio, alive and pulsating, a noisy friend, and yet, an intrinsic molecular part of her routine. She is unable to recall the last time the radio had not pulsed the air around her with melodies and voices. Should she try befriending silence? The searing thought that she is utterly dependent on this oldie throbs painfully, an old wound, engulfing every open space. The foul familiarity of it, the sordid comfort!

Cloudy skies threaten above, portending untimely rain. Loneliness gnaws and itches. She switches channels even as her eyes fall upon the map on the wall. The circles around certain countries and cities make her smile, in spite of herself. Malaysia, Thailand, Vietnam, Cambodia – the exotic and unreachable lands.

The radio blares on, ‘…so our next song is dedicated to all the lady winners, from the voice of our nightingale…no guesses for this one,’ and a thousand violins break into orchestral harmony.

Amita’s mood changes and her spirits soar with the rising crescendo. A light-headedness overcomes her. This old radio – her only companion? So be it! The melody from a film she remembers watching as a young girl overcomes her senses and her nerves lose their pinch. She lies down on the couch at 11 am. She is a young woman again, unfettered and light. A quiet breeze wafts in through the open window, and the curtains wave in the mellow light streaming in.

The electricity returns to jolt the fan into its habitual whirring motion, and Amita’s mid-day reverie is broken.

She pulls up a stool, puts the knife down with the colander that holds half of the chopped bitter gourd, and seats herself opposite the world map, dreamily tracing her index finger from Delhi to Lahore. Her mind follows her finger, and gently drifts back to the day when she and her husband had visited the Delhi Book Fair. It had been around the end of March, when the weather had lost its bite and was exceedingly pleasant. They had both decided to explore separately, choosing pavilions based on their interests, browsing through books and picking up the odd one.

They had decided to meet in the central courtyard for lunch at 1.30 pm. Both man and wife were ravenous by the time they reunited, and shared sumptuous fare at the Indian Food Court. The cheery ambience, the weather, and being together without their children, for the first time in years, seemed to have worked wonders on their appetite. They laughed and chatted as they stuffed themselves on the ordinary fare, a simple combination of hot, fried bread with spicy chickpea curry. By three, the sun shone strong and warm. Amita’s forehead releases its creases at the memory of this simple intimacy shared from what feels like a lifetime ago.

And then, just as joy courses through her, anxiety returns to claw at her. Why is Maheep so casual these days, so negligent of her feelings? Was she ageing, was her beauty waning? She tucks in her tummy as she feels its flab, loose and annoying, sensing the presence of her husband, who lurks in her mind’s intimate corners. She stands up and stares at her reflection in the windowpane, and sees a woman in her forties, far prettier than plain, still tall and erect. She looks for flaws but sees none. She was truly lovely, she could not deny, yet she was denied the pleasures of her body’s cravings. Why? She has always been someone who was proud of her fitness levels and of the way she presented herself, ensuring she chose her wardrobe with great care.

Amita begins reminiscing about her childhood memories where she would dress to imitate her brothers’ wardrobe (the only girl among three children) in an urgent need to belong and be the boy among boys. For the longest time, she imagined waking up as a boy, rather than the lovely girl she was to become. This was the only thought that would trouble her before she turned 13, blossoming into a lissom lass. She smiled as she recalled how she would chop her curls slyly and, on being asked by her ever-watchful mother, lie with a straight face. She gradually falls into a deep slumber as these joyful images draw her into a world of memory-filled dreams, leaving the bitter gourd unchopped, till Maheep arrives home, earlier than usual.

He turns the key to let himself in at 4.30 pm, instead of the habitual 7 pm. Amita is asleep, and the radio is warbling tunelessly, like a forgotten bird. Warm sunshine floods their living room, even as the sun begins its descent. The blade of the knife in the colander blinds Maheep as he calls out to his wife.

‘Hey love, I’m home early, look at what I’ve brought!’ he yells, shaking his wife out of a deep slumber.

‘What is it? Can you not shout? You’ve ruined my …’ she stops herself, not wanting to sound rude. After all, she’s an obedient and dutiful wife, always sweet-natured, speaking in soft tones, suppressing every yearning.

‘Look na!’ says Maheep, not hearing his wife’s pleas, not seeing her at all – not into her eyes, not at her.

She looks at the flight tickets – Kuala Lumpur. She’s aghast!

‘But why…I mean, when did you plan this? Wait, let me make you some tea, yes?’ The ever-servile Amita takes over.

Amita reels under the sudden news, half-awake, still roaming through her childhood memories of running around with her brothers and being chased by them. They had a marriage to attend this coming weekend. Maheep’s nephew was getting married at the age of 30, and it had the family in a tizzy, and there were ceremonies they were invited to before that. How could they disappear, and that too to Kuala Lumpur? She wondered how to remind him. Would he be angry? Would he relent and postpone the trip to the week after? She excuses herself, barely responding to his cheery demeanour, but he notices nothing, mirthful in his plans to please himself and his beautiful wife.

Once they alight at Kuala Lumpur International Airport, and are done with immigration, Amita allows herself to feel the onrush of freedom, the return of a lost friendship, and the return of an air that is distinctly different from the one she’s left behind. As they emerge from the airport and get inside a cab that promises to beat the traffic and get them to their hotel in time for a late lunch, Maheep clasps her hand tightly, almost hurting her. She doesn’t resist.

‘You know, I’ve been meaning to tell you how beautiful you are, and to take you somewhere where we can be lovers again, just like old times. Malaysia was the first dot on our map…I’d noticed this months ago. Do you understand what I’m saying?’ Maheep brings his face close to hers.

She gasps at this sudden intimacy. Her heart pulsates in her lips as the longing for his passionate demand of her gains momentum. A silent prayer of gratitude escapes her mouth quietly; for once she chose to not be the dutiful woman who plays by the rules. Maheep senses her acquiescence and kisses her mouth with unabated passion, as the old cab driver watches them in the rear-view mirror – a couple’s longing to share an intimate moment in the dark contours of a Malaysian cab, one they wouldn’t ever forget. 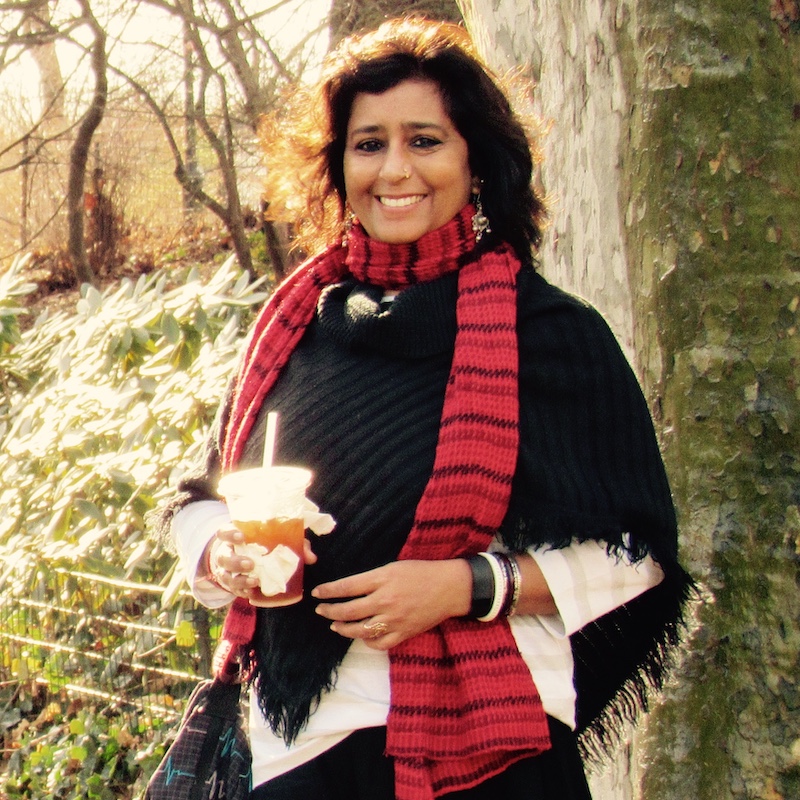 Not only a writer, Kamalini, is also a trained classical singer (Indian classical) and a teacher of French and Spanish. She regularly jams with a group of musicians. Her short stories and articles have been published in magazines, blogs and journals such as Parenting, New Woman, Café Dissensus and Coldnoon. Recently one of her essays, entitled Probing The Dermis, was published in a book – Twilight’s Children, Chronicles Of Uncommon Lives. Her first novel, Naked Beneath The Midnight Sun, will be published in 2019. You can follow her blog, here.