Books As A Decor Tool: Bookstagrammers Need To Think Beyond Pretty

Search for a #shelfie on Instagram and you will come across manicured and tastefully decorated bookshelves. ‘Shelfies’ and other hooks like #librarylove, #bookmail, etc. are popular among bookstagrammers — those Instagram users whose accounts are dedicated to books. This industry boasts of approximately 40 million users, who — woefully — do not tap into the literary aspect of novels, but instead prefer to use them as artistic tools to make attractive posts. Evidence of this is available in plenty via images comprising books neatly arranged into picture-perfect frames, clicked with props and other paraphernalia, accompanied by sparse talk about the content. In the bookstagram business, books have ended up becoming models rather than educators.

As a result, this vanity has highlighted a conflict between simply amassing followers through attractive posts and furthering the content of a book. When it comes to the latter, most of the popular bookstagrammers often stick to hyper-mainstream content like the Harry Potter series, The Hunger Games or Percy Jackson. Otherwise, the books are edited to fit into self-portraits or simply arranged in the backdrop, accompanied by casual questions. 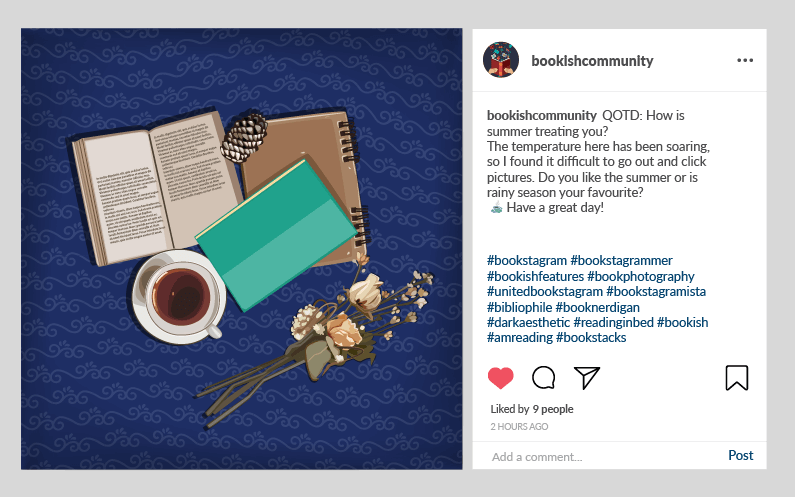 These observations — on hyper-mainstream content (especially when it comes to Harry Potter), book arrangements and general enquiries about life — can be seen on the very popular account of @james_trevino. He has multiple pictures with books, where he has organised them to resemble wings on himself, the Deathly Hallows symbol with him as the Elder wand, a Quidditch match, and so on. The art is vividly spectacular. However, there is nothing literary about it — the books in the backdrop are rarely discussed. Instead, you may come across a picture of him holding a book, bearing the caption: What was, in your opinion, the most important day of your life?

The majority of his feed is riddled with questions of this nature that accompany his beautifully crafted images. He has close to 2.5 lakh followers, similar to accounts like @elizabeth_sagan, @librarianofazkaban, @witchy.reads, @booknerd_reads, @horrorreads, @wishiwasabook, and many more. The person behind @witchy.reads photographs novels in Halloweenesque set-ups. They are characterised by warm colours, candles and objects depicting sorcery. She, too, prefers asking questions about life to her audience. Similar questions are also posed by @booknerd_reads, who photographs books in settings characterised by pale colours, accompanied by questions like, ‘What are you looking forward to this autumn?’

Bookstagram India also harbours accounts where the pictorial aspect overshoots discussions about the books. For instance, @thereaddicts is exclusively dedicated to photos of people reading without mentioning the name of the book. Moreover, there are a handful of accounts, like that of _@penandpapers where the bookshelves and life around books (how they spent time reading, where they went shopping, etc.) are given more importance than relevant discussions. Another peculiar trend on #bookstagramindia is that of random quotes — none related to or from books — being made into visual posts by accounts like @the-oneliner and @those.hidden.feelings. These quotes are often inscribed in graceful calligraphic strokes.

Bookstagram users often give shout-outs to one another to boost their audiences. Most of the aforementioned accounts have followers in hundreds and thousands. As a result, they wield a lot of influence for a novice who is struggling to get his/her work popularised across social media. While shout-outs are a brilliant tool in this regard, they are rarely explored in a manner that aligns their utility with that of a new author struggling to market his/her book. 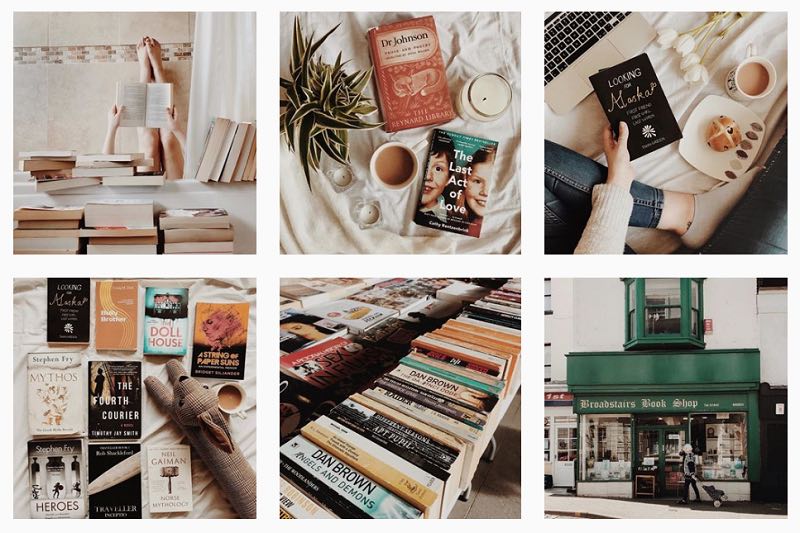 (Image via The Hels Project)

Visit @frenchflaps_and_deckleedges’s account and you will get a whiff of coffee and see lovely bookshelves, all focussed around the star of the image — the book itself. The people behind this account actually grab your attention with their discussions on the book they have chosen to read. For instance, in one of their images, William Dalrymple’s City Of Djinns is placed among rumpled sheets by a window, beside a large cup of coffee. The account then proceeds to review it honestly, talking about the manner in which the novel portrays ‘Delhi’s decline’ and the accompanying ‘sense of loss’. The user behind @sant.reads also encapsulates the gist of the book that is written out, accompanying a clean picture of the novel alongside coffee, on the shelves and so on. For instance, in her review of Madhuri Vijay’s The Far Field, she writes that the book is about ‘loss, grieving and finding oneself’ and then elaborates why she feels so, by giving ample examples.

Such a discussion creates intrigue, benefits the author, the reader as well as the publisher rather than the book being used just as a prop for a casual question. Other noteworthy mentions should go to @Muffytales, where looks and books are combined with a furry pet; and to @thebookishtales, for creating art via the Kindle. The user behind @Muffytales places Mufasa, a handsome golden retriever, in the spotlight and sneaks in a book with him. The review follows, stating aspects that the book explores. In return, the account benefits from a lot of merchandising partnerships — a win-win for all the parties involved. Likewise, @thebookishtales is followed by two major Indian publication houses, Westland and Harper Collins India, for taking some stellar books and conversations to a larger audience, such as discussions on naxalbari from There’s Gunpowder In The Air by Manoranjan Byapari and the ‘trance-like’ literature of Perumal Murugan.

These accounts also have a large audience that enthusiastically engages with the books first and then the props used in the image. Perhaps books resonate better with readers when they are discussed in well-decorated surroundings, rather than when they are simply used to create art. No doubt it is a painstaking effort, but does it really serve the purpose of a curious reader? And, when the visual overtakes the content, the efforts of smaller accounts like @libroreview (which does quick video reviews), @the.electic.book.reviews (that profiles what the people of Mumbai are reading), and so on, often do not shine. 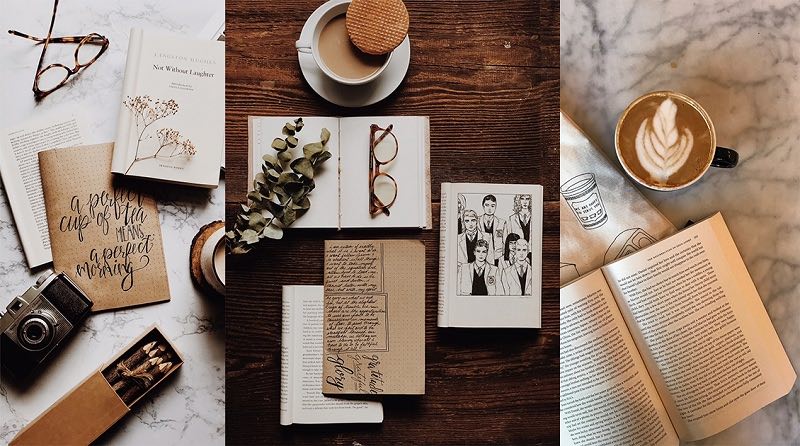 The endeavour perhaps needs to be multi-dimensional. Without villainising the visual aspect — which counts for a large portion of the engagement — it would be wise to state that it needs to blend in with a book’s purpose of informing its readers. The artistry should not shove the quietude of reading and the joys of exploration into the backdrop, just like you should never judge a book by its cover.

Want to get started with your own Bookstagram account but don’t know how to? Read our guide.