‘My God! You found that on the internet? What else do you need to die of shame? I don’t know what’ s wrong with these people.’ Pretty seemed worried at first and then she burst out laughing. She was speaking to Rithu, who had called her in a state of shock after seeing the video.

Ragesh had just left, saying on his way out, ‘We need to find the truth behind this, Rithu. We came into the fold. Each of us had our own reasons for doing so. But why should we allow ourselves to become a laughing stock in society?’

Rithu called Pretty as soon as she stepped into her room, even before changing. She was really anxious. But Pretty condensed her reply into a laugh.

‘Don’t laugh, Pretty, I have still not recovered from the shock,’ said Rithu, scolding her.

‘It’s because you are used to seeing only small things that shock you. It’s like how you shiver when you step into the water for the first time. But after you’ve been in it for a while, you begin to realize that this feeling is not really as big a deal as you thought it to be, that it is just a house of cards built on a foundation of lies,’ said Pretty.

‘That was from a play I was part of in my early days in Pune. I had no option but to don a role. I have spoken to you in detail about the circle of fate that I am trapped in. They made me play this role. The pastor’s take was that all this was required to bring people into the fellowship. In the beginning, I was hesitant. After several shows, it became a joke. A joke that fetched me decent pocket money. Then why give it up? It was not just me, Rithu. There were a few of us. We performed across north India, all the while exchanging roles and illnesses. They needed helpless souls to enact madness, utter gibberish, dance like people possessed and faint when required. Most of them were actors hired from the villages of north India and Tamil Nadu. I don’t know if you will believe me when I tell you this – we even had secret camps that taught these actors to faint and dance as though they were possessed. Those were the days when I actually lived out the irony in the Shakespearean lines which I had studied in the eighth standard – “All the world’s a stage and all the men and women merely players.” It is because you are relatively new seekers that you don’t know all this. In fact, it continues to happen even now. If you come to Pune once again, we can go together to see the training ground for God’s miracles. If you want, I can give you the opportunity to talk about the miracles of God at one or two venues. There’s a very strong market for beautiful women like you.’

For a long time, Rithu sat in silence with the phone in her hand. Long enough to make Pretty wonder if she had hung up and gone. ‘Amidst all this, where does the Christ who was crucified belong, Pretty?’ Rithu eventually asked.

Pretty burst out laughing again. ‘This is the age of tele-evangelists who travel the world in their private jets, charging crores for a one-hour session on TV. What business does that poor carpenter from Nazareth have here? The poor man is probably standing inconspicuously amidst people, worried if he will be done to death again.’ Pretty laughed again, and that was the end of that conversation.

‘How can she laugh in spite of all this?’ Ragesh asked, when Rithu called him to fill him in on her conversation with Pretty.

‘It is possible, Ragesh. Miracles will stun us and secrets will shock us only up to a point. After that, you just feel like laughing at it all. Pretty has pretty much crossed that point after traversing through surprise and shock. We should not make light of her laughter. It contains the weight of all the miseries that she has carried,’ said Rithu.

‘I don’t know the nature of the investigation you are undertaking into Midhun’s death or where it has reached. But from tomorrow onwards, I will be with you on this,’ Ragesh assured Rithu firmly, before he wound up the conversation that night.

‘You still live in my heart with the same passion, as you did yesterday. In every way.’ It was after sending this message to Ragesh that Rithu went to bed. 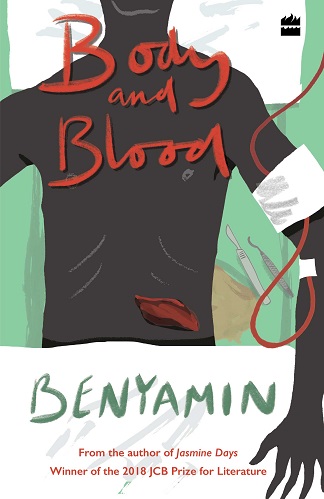 Benyamin is an Indian novelist and short story writer, with books like Goat Days and Jasmine Days to his name. His books have won him the Kerala Sahitya Akademi Award and the JCB Prize for Literature, and have been shortlisted for the Man Asian Literary Prize and the DSC Prize for South Asian Literature.
Excerpted with permission from Body And Blood by Benyamin, Swarup B.R. (Tr.), published by Harper Perennial India, available online and at your nearest bookstore.