On the day she forgot the name of the road she has lived on for two decades, Ma called me to say she had bought a pack of razors and wouldn’t be afraid to use them if circumstances deteriorated further. Then she started to cry. Through the phone I could hear horns bleating, people shouting. The sounds of Pune’s streets. She began to cough and lost her train of thought. I could practically smell the fumes of the auto-rickshaw she sat in through the phone, the dark smoke it pumped out, as though I were standing right next to her. For a moment, I felt bad. It must be the worst kind of suffering – cognizance of one’s own collapse, the penance of watching as things slip away. On the other hand, I knew this was a lie. My mother would never spend so much. A pack of razors, when only one would do the trick? She always did have a penchant for displaying emotion in public. I decided the best way to handle the situation was a compromise of sorts: I told my mother not to be dramatic, but noted down the incident so I could look for any razors and dispose of them at a later date.

I’ve noted down many things about my mother: the hour she falls asleep at night, when her reading glasses slip down the greasy slide of her nose, or the number of Mazorin filos she eats for breakfast – I have been keeping track of these details. I know the skirted responsibilities, and where the surface of story has been buffed smooth.

Sometimes when I visit her, she asks me to dial friends who are long dead.

My mother was a woman who could memorize recipes she had only read once. She could recall variations of tea made in other people’s homes. When she cooked, she reached out for bottles and masalas without glancing up.

Ma remembered the technique the Memon neighbours used to kill goats during Bakra Eid on the terrace above her parents’ old apartment, much to the Jain landlord’s horror, and how the wire-haired Muslim tailor once gave her a rusty basin to collect the blood in. She described the metallic taste for me, and how she had licked her red fingers.

‘My first taste of non-veg,’ she said. We were sitting along the water in Alandi. Pilgrims washed themselves and mourners submerged ashes. The murky river flowed imperceptibly, the colour of gangrene. Ma had wanted to get away from the house, from my grandmother, from talk about my father. It was an in- between time, after we had left the ashram and before they would send me away to boarding school. There was a truce between my mother and me for a moment, when I could still believe the worst was behind us. She didn’t tell me where we were going in the dark, and I couldn’t read the paper sign taped to the front of the bus we boarded. My stomach grunted, full of fear that we would disappear again on another one of my mother’s whims, but we stayed near the river where the bus dropped us off, and as the sun came up, the light made rainbows in the pools of petrol that had collected on the surface of the water. Once the day became hot, we returned home. Nani and Nana were frantic, but Ma said we hadn’t left the grounds of the compound where we lived. They believed her because they wanted to, though her story was unlikely since the compound where their building stood was not large enough to get lost in. Ma smiled as she spoke – she could lie easily.

It impressed me, that she was such a liar. For a time, I wanted to emulate this quality; it seemed like the one useful trait she had. My grandparents questioned the watchman but he could verify nothing – he was often sleeping on the job. And so we paused in this stalemate, as we so often would again, everyone standing by their falsehoods, certain that their own self-interest would prevail. I repeated my mother’s story when I was questioned again later. I had not yet learned what dissent was. I was still docile as a dog.

Sometimes, I refer to Ma in the past tense even though she is still alive. This would hurt her if she could remember it long enough. Dilip is her favourite person at the moment. He is an ideal son-in-law. When they meet, there are no expectations clouding the air around them. He doesn’t remember her as she was – he accepts her as she is, and is happy to reintroduce himself if she forgets his name.

I wish I could be that way, but the mother I remember appears and vanishes in front of me, a battery-operated doll whose mechanism is failing. The doll turns inanimate. The spell is broken. The child does not know what is real or what can be counted on. Maybe she never knew. The child cries.

I wish India allowed for assisted suicide like the Netherlands. Not just for the dignity of the patient, but for everyone involved.

I should be sad instead of angry.

Sometimes I cry when no one else is around – I am grieving, but it’s too early to burn the body. 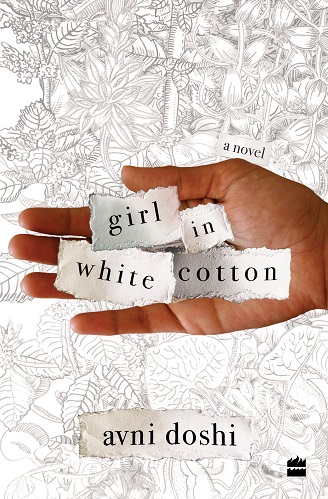 Avni Doshi was born in New Jersey. She completed her BA in Art History from Barnard College in New York and went on to do an MA in History of Art at University College London. While working as an art writer and curator in India, Avni began writing fiction in her spare time. She has been awarded the Tibor Jones South Asia Prize and a Charles Pick Fellowship. Avni lives in Dubai with her family. Girl in White Cotton is her first novel. You can follow her on Instagram.

Excerpted with permission from Girl In White Cotton, Avni Doshi, Fourth Estate India, available online and at your nearest bookstore.