In 2006, horror pundit Stephen King wrote a novel that deviated from his brand of fearsome chronicles. Far away from vampires and ghosts, his book, Lisey’s Story, delved into the horrors of loss of love and literal ghosts of the past. This 650+ page narrative that won King the tag of consummate storyteller is essentially the story of Lisey (pronounced Lee-see) Landon, the widow of Pulitzer-winning writer Scott Landon, who died two years before the novel begins.

She has been grieving ever since, often reminiscing over their time together. While cleaning his writing area in their posh bungalow, she gets dragged into a cesspool of repressed memories at the bottom of which lies the world, ‘Boo’ya Moon’ that her husband inhabited since his childhood in order to escape the abuse inflicted by his eccentric father. Boo’ya Moon is essentially a creation of Scott’s imagination as a child that grows with him into adulthood, fantastically representing his various states of mind. 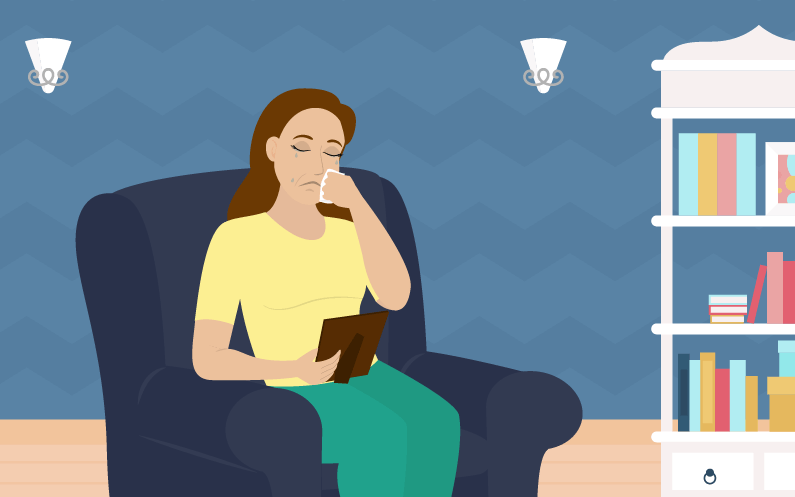 As a child, Scott learned to wander off to Boo’ya Moon to escape the abuse. In the real world, however, he has had to grow up dealing with the trauma of his childhood, which Lisey makes a genuine effort to untangle. Scott grows into a vulnerable man, haunted by the memories of his childhood and the fear that he too might be possessed with the ‘bad gunky’, a word made up by his father to describe the demonic entity that caused his brother’s death. The word also works as a larger allegory for a mental illness that runs in the family, traces of which are seen in Scott. Lisey attempts to understand this hereditary issue that has often caused Scott to see demons.

Lisey’s compassionate ear and Scott’s absolute trust in her become the strong foundation of their love, continuing well after Scott’s death. As Lisey delves deeper into Scott’s past, she explores his eccentricities further.

This also marks her transition into a gothic heroine, as she is characteristically motivated by a spirit to uncover secrets. As she explores her life with Scott, Lisey gets caught in an unfamiliar landscape, one that is resonant of the works of Edgar Allan Poe and Samuel Tyler Coleridge.

(The Dreaming Pool of Boo’ya Moon; Image via ArtStation)

Lisey is to King what Christabel is to Coleridge — a quintessential gothic heroine who ventures out of her castle/mansion on an unexplainable impulse and is met with supernatural experiences. While Christabel steps out into the forest to pray, Lisey often ventures into the barn (Scott’s study) to revisit his work. The striking similarity is in what they find. Christabel finds a damsel-in-distress whose presence is never explained and she is warned of the ‘supernatural’ entity through classic gothic elements like barking mastiffs. Similarly, Lisey finds Scott’s presence to be more powerful amongst his things in the study, with the vigorous wind acting as her warning.

The similarities between Coleridge’s half-finished poem, Christabel, and King’s lengthy novel can also be observed in the setting. Both narratives have grand houses with moonlight playing in the corridors, wind howling mightily and memories being triggered by certain rooms. In Christabel, Coleridge describes an instance where a Baron’s room feels like it has ‘stifled death’ and in Lisey’s Story, Lisey deliberately steers clear of a room where she once found Scott staring at a dead television. Dressed in plain cotton clothes and buried under an afghan, Lisey discovers her husband with a deadpan look in his eyes. He has seemingly descended into a state of limbo or, as she fears, is in the grip of ‘bad gunky’ — all pointing towards insanity.

Insanity has been a recurring theme in Poe’s works as well. He has also written about ‘death, decay, reanimation of the dead and mourning’, as claimed by Gerald Kennedy in Poe, Death, And The Life Of Writing. The descent into insanity can be seen in the light of Poe’s Tell-Tale Heart. At the centre of this story is an insane narrator, whose paranoia peaks because of a constant ringing sound as well as an even number of heartbeats that emanate from the ground. In King’s story, Scott is harrowed by visions of a ‘vast creature with a piebald side’. This has haunted him since childhood, manifesting into a bad omen. This vision became stronger in the days prior to Scott’s death – a fact he had shared with Lisey. In the present, Lisey is left searching for the meaning behind Scott’s visions. 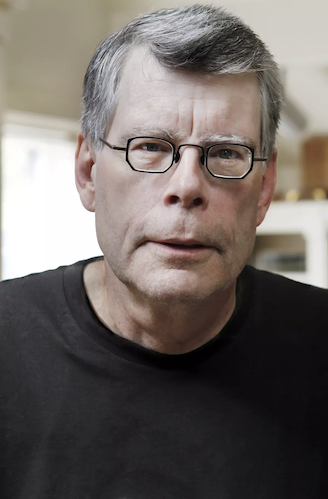 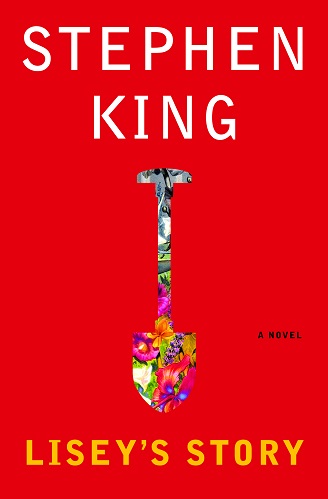 As she mourns his loss, Lisey remembers Scott’s many vulnerabilities. She recollects the time when Scott opened up to her about the eccentricity running through his family. This was during a moment where he had hurt himself while trying to purge the ‘bad gunky’ and was visibly shaken. Lisey comforted him by tending to his physical and mental wounds.

Memories like this hit Lisey like the ebb and flow of the tide. Scott’s absence rings in her mind, quite literally, where she hears him say certain words that are specific to their relationship. Lisey and Scott use made-up words like ‘bad gunky’, ‘SOWISA’ (Strap On Whenever It Seems Appropriate – Scott’s way of saying, move on), ‘bool’ (something between a clue and a gift). These words are whispered into her ear by Scott after his death. She responds to them, sometimes in irritation and sometimes with love, almost as if she were in a conversation with her deceased husband. This language keeps Scott alive for her, giving her the strength to survive each day.

Through Lisey’s grief, King shows us the ennui of living each day following the death of a loved one. Lisey does her best to live her life by holding on to her memories. It is only through these memories that she realises that Scott has left her bools to lead her towards Boo’ya Moon, where she feels he could be seen once again. 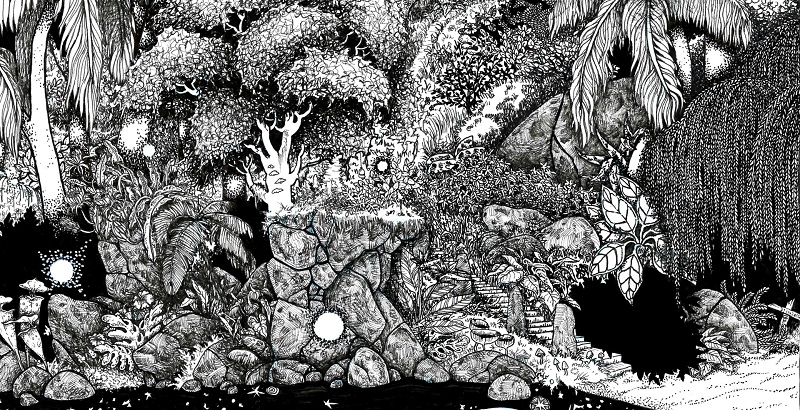 (The Dreaming Pool of Boo’ya Moon; Image via ArtStation)

This fantastical place, Boo’ya Moon, is a world that has flown from a child’s fantasy and metamorphosed into an adult’s imagination. Scott has been able to escape here physically, to roam about in the gothic landscape marked by large celestial bodies floating in the sky, vivid sunsets and an amalgamation of several landscapes like a beach, forest and plains. This world also harbours a monster that Scott claimed to have witnessed even when he was lucid.

This was a place he had taken Lisey to while alive, the memory of which is repressed. It opens up after his death, prompting her to escape here, in the hope that she might find something to connect her to Scott again.

Boo’ya Moon is a physical memory of Scott’s which Lisey embraces for a while. This is the peak of her mourning, where she finds the answers to many of her unanswered questions. For instance, as she debates the validity of Scott’s fears in her mind, she encounters the monster with the piebald side in Boo’ya Moon. The ‘weird’ that Scott had spoken about was proven true in this fantastic world. Moreover, Scott manages to leave something behind for Lisey in Boo’ya Moon which helps her make peace with her husband’s death. The bittersweet closure is, ultimately, a meditation on love and loss in this novel.

Love makes enough room for two wildly different people — Lisey and Scott — to live with one another to the fullest, even showing Lisey a path into Scott’s imagination. And, in loss, Lisey learns to let Scott go, while accepting the permanence of their love.

The Criticism Against Dahl: What We Failed To Understand As Children 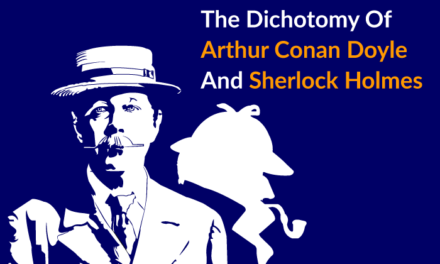 The Dichotomy Of Arthur Conan Doyle And Sherlock Holmes 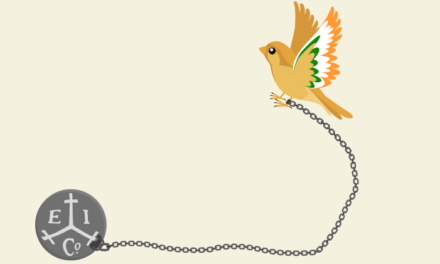 Why William Dalrymple’s ‘The Anarchy’ Is An Essential Read Today 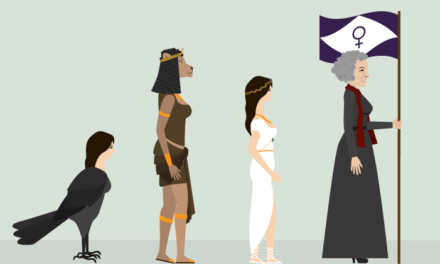 How Margaret Atwood Redefined Mythology Through Her Feminist Retellings