The Hidden Math Behind Alice In Wonderland

We know that mathematics is a good technical tool, often used by artists. However, can mathematics also be used as a creative stimulus? As radical as this thought might be, the works of both Dali and Charles Lutwidge Dodgson, more famously known as Lewis Carroll, indicate that it is not beyond the realm of possibility. While Dodgson was a mathematician, the surrealist painter Dali made extensive use of mathematics in his works. In a barely overlapping lifespan, the two gentlemen were bound together by the influence of mathematics in their creative work. In 1969, Dali was commissioned by Random House to create illustrations for Lewis Carroll’s Alice’s Adventures in Wonderland. Salvador Dali’s illustrations aptly capture the surreal yet curiously logical and mathematical realm of Alice In Wonderland. 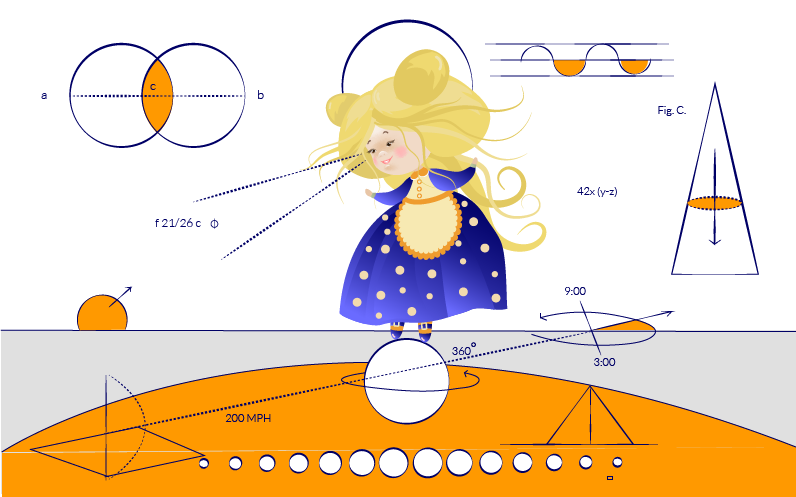 Was his day job, Carroll’s and consequently Alice In Wonderland’s, only connection to mathematics? Unlikely. He was a conservative and passionate mathematician who by most accounts was distressed by all the new theories in mathematics that were being sloshed about. It is believed by many that Alice In Wonderland was, in fact, a mathematical satire and Carroll’s way of belittling and perhaps even maintaining equilibrium in the face of dramatic change. Magic mushrooms, babies turning into pigs, and absurd questions (‘why is a raven like a writing desk?’) were perhaps, all meant to show how pointless and annoying these new theories were.

An idle day on the Thames was made interesting by the story of a little girl called Alice who falls into a rabbit hole as she chases a clothed white rabbit that runs past her while hurriedly consulting a pocket watch. What is the story without the encounter with the hookah-smoking caterpillar; the meeting with the duchess whose baby turns into a pig; and the tea party with the Mad Hatter and the March Hare? However, all of these elements were added later by the author, possibly to ridicule contemporary mathematicians who were busy postulating new-fangled theories that departed from actual observable reality.

Dodgson liked good, old-fashioned no-nonsense algebra and Euclidean geometry – areas of study that could prove things about the natural world. It was really as simple as saying that given a point and a line, there is exactly one line through the point that is in the same plane as the given line and never intersects it. Now imagine a time where professors and students of mathematics were dabbling with “alternate theories” that attempted to prove that one plus one might not equal to two. The very thought was blasphemous to someone like Dodgson.

So he turned to prose to share his contempt and dislike for these crazy, new things. 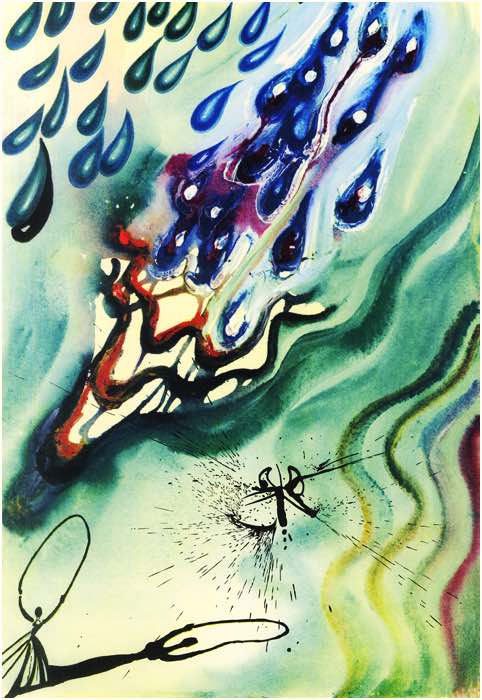 In the Pool of Tears

“I’m sure I ’m not Ada,” she said, “for her hair goes in such long ringlets, and mine doesn’t go in ringlets at all; and I ’m sure I can ’t be Mabel, for I know all sorts of things, and she, oh! she knows such a very little! Besides, she’s she, and I’m I, and—oh dear, how puzzling it all is! I ’ll try if I know all the things I used to know.

In the pool of tears, Alice’s attempts at simple multiplication leave her confounded. In regular math, four times six would never be thirteen. We work in base ten, meaning we have zero-through-nine digits, and then when we get to ten we move over and put a one in the next column. However, if you play around with the base systems, things can change.

While Alice was calculating in base ten, in this new, crazy wonderland, her answers slipped into higher base systems. People are at risk of getting lost like Alice when they stay anchored to original standards or beliefs in the face of changing systems. In Dali’s illustration of the pool of tears, accurate arcs drawn by Alice’s skipping rope and clearly defined tears coexist with a morphed pool of tears, seem almost ready to assail Alice. The four elements in the picture, ie., the tears, the pool, Alice and the insect seem fairly disparate and are yet able to come together and convey Alice’s predicament. 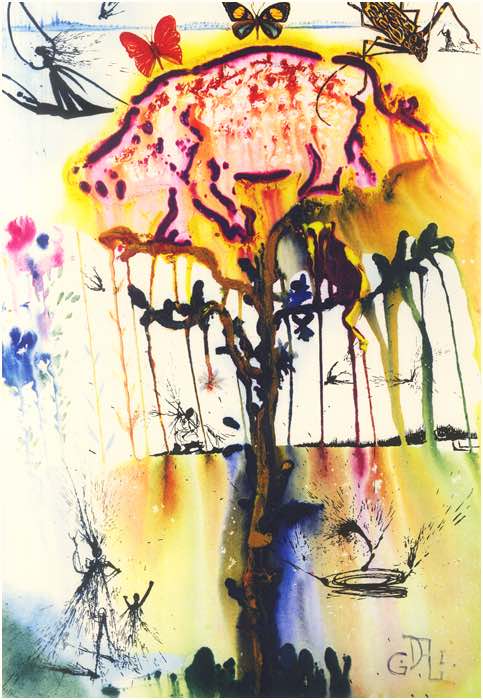 The baby grunted again, and Alice looked very anxiously into its face to see what was the matter with it. There could be no doubt that it had a very turn-up nose, much more like a snout than a real nose; also its eyes were getting extremely small, for a baby: altogether Alice did not like the look of the thing at all, “—but perhaps it was only sobbing,” she thought, and looked into its eyes again, to see if there were any tears.

No, there were no tears. “If you’re going to turn into a pig, my dear,” said Alice, seriously, “I’ll have nothing more to do with you. Mind now!” The poor little thing sobbed again, (or grunted, it was impossible to say which,) and they went on for some while in silence.

Alice was just beginning to think to herself, “Now, what am I to do with this creature when I get it home?” when it grunted again, so violently, that she looked down into its face in some alarm. This time there could be no mistake about it: it was neither more nor less than a pig.

Seems simple enough and yet Carroll craftily disparaged the work of mathematician Jean-Victor Poncelet in this section. Poncelet talked about the transformation of geometric figures and perpetuated the belief that geometric figures undergoing a continuous transformation, without any sudden changes or subtractions, are likely to retain some of their original features. However, this might not necessarily be physically tangible and would be possible only through the use of things like imaginary numbers. The baby transforming into a pig is Carroll’s way of showing how absurd and grotesque he found this idea. You can either be a baby or a pig, but no amount of tiny changes can make you both. 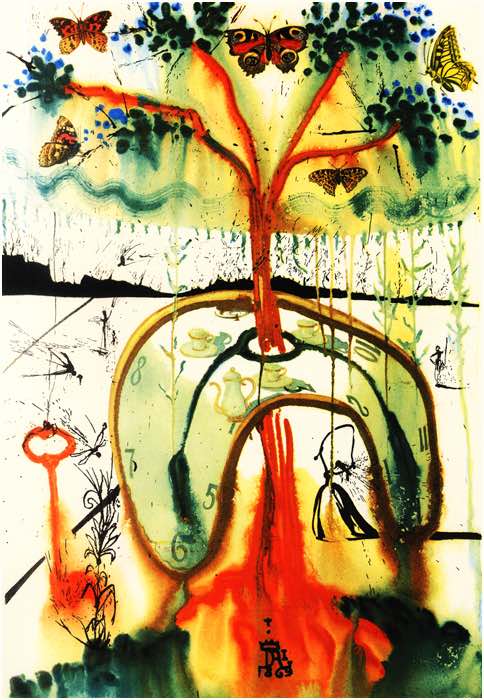 At the Tea Party

Dali’s depiction of the Mad Tea-party is filled with unsettling shadows and odd juxtapositions that create sinister and frightening imagery. The tea-party floats ambiguously, seemingly around a tree and is interspersed with butterflies and oversized insects. In Carroll’s tea party, the Doormouse, the Mad Hatter, and the March Hare are all going in a circle around a table in a perpetual tea time as Carroll took away the fourth member of their party, Time.

In the mid-1800s, mathematician William Rowan Hamilton had come up with a new number system called quaternions. This was a sort of coordinate system based on four terms, three that designate place or spatial dimensions, and one that designated, or so Hamilton decided, time. With these four terms, Hamilton could describe rotation in a three dimensional universe. He could only do this, though, if he added that fourth component. Without “time”, they would keep rotating round and round in a plane, like the hands of a clock.

Carroll was miffed that someone could simply appropriate time as a fourth dimension. By taking away time, he left the other three to keep going around in circles forever, like an incomplete quaternion.

Alice sighed wearily. “I think you might do something better with the time,” she said, “than waste it in asking riddles that have no answers.”

“If you knew Time as well as I do,” said the Hatter, “you wouldn’t talk about wasting it. It’s him.”

“I don’t know what you mean,” said Alice.

“Of course you don’t!” the Hatter said, tossing his head contemptuously. “I dare say you never even spoke to Time!”

“Perhaps not,” Alice cautiously replied: “but I know I have to beat time when I learn music.”

“Ah! that accounts for it,” said the Hatter. “He won’t stand beating. Now, if you only kept on good terms with him, he’d do almost anything you liked with the clock.

“Is that the way you manage?” Alice asked. The Hatter shook his head mournfully. “Not I!” he replied. “We quarrelled last March—— just before he went mad, you know——” (pointing with his teaspoon at the March Hare,). “And ever since that,” the Hatter went on in a mournful tone, “he won’t do a thing I ask! It’s always six o’clock now.”

Logic was another weapon of choice for Carroll, and the text of Alice in Wonderland is widely sprayed with riddles and logic statement.

“Take some more tea,” the March Hare said to Alice, very earnestly. “I’ve had nothing yet,” Alice replied in an offended tone, “so I can’t take more.”

“You mean, you can’t take less,” said the Hatter: “it’s very easy to take more than nothing.”

The Mad Hatter is trying to tell Alice that she can have more tea, given that she has not yet had anything to drink, but what she cannot do is “take less.” 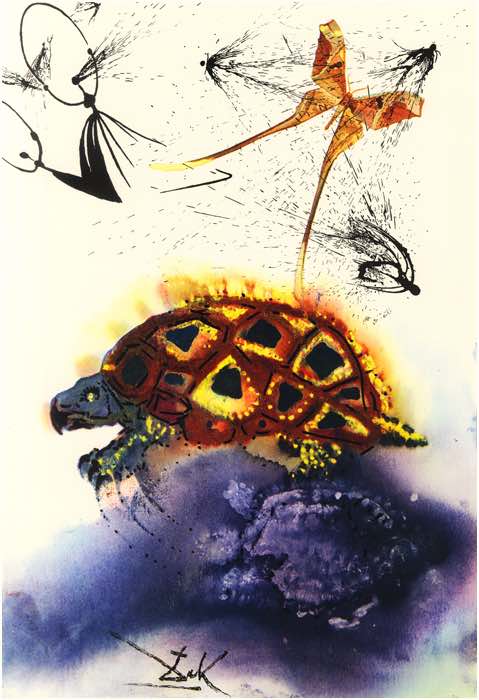 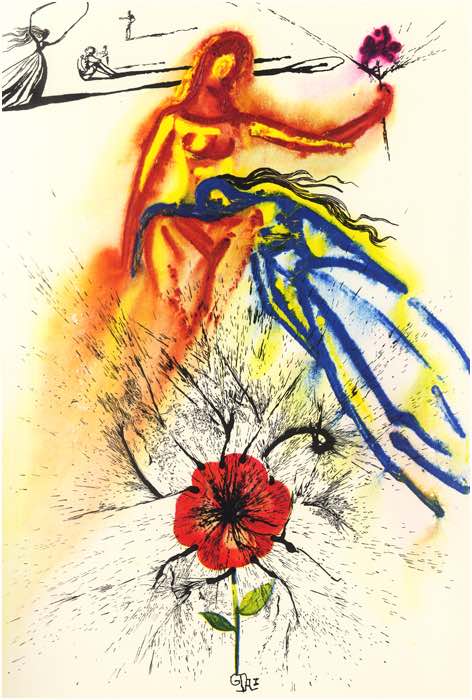 It is delightful how both Lewis Carroll and Salvador Dali wove logic and mathematics into their creative works. The thinking man’s work will usually have layers of analytics and aesthetics intertwined with each other. Discovering and then appreciating these layers can be very rewarding. Many of us believe that analytics/mathematics and creativity (whether in writing or painting) are more often than not, mutually exclusive. However, if treated with care, the amalgamation of the two can lead to something as unique and enduring as Carroll’s masterpiece – Alice In Wonderland.