Birds And Other Inequalities

Author’s Note: This story was written as an ode to the invisible grief that people carry. The grief that can’t be spoken about or acknowledged or even reconciled with through our normal support systems. An affair is, perhaps a rather direct example of this grief, but there are many other burdens and hidden pockets that we carry around on a daily basis. This story is my attempt to capture and give voice to the same.

It’s only safe when he’s on Twitter. That’s when you can message. Every day, you wait for him to ‘heart’ a random tweet. The notification comes on your newsfeed. That’s your cue to DM something casually restrained and partially sexy. The heavy stuff follows in a few minutes, but you leave that to him since he likes it that way. But he’ll never message you first – even when it’s safe for him. He won’t ‘heart’ your tweet. It’s just the system, it’s how it’s always been. And it’s kept both of you safe till now, so why mess with tradition?

The only useful social observation you’ve learned while having an affair is how to spot other couples that are having one. It was never on your radar before. But now, this small but potent difference is irrefutable. The difference is in the body language. Look closely, you’ll see the difference between regular couples sitting at cafes and the couples who are playing with fate, waiting for shit to blow up in their faces, all for a few stolen moments with each other over a latte on an extended lunch break.

The difference is present in this fluctuation between a religious restraint from touching each other that quickly devolves to rabid hand holding and forehead grazing. And then, without cause, it jumps back to frightened restraint. These are also the couples you’ll find in the darkest corner of a ubiquitous pan-Asian restaurant that sells a Kingfisher for 99 bucks.

He likes to only meet you at two places. One is where he can have his whiskey, the other is where you can have your latte. Lattes only when he’s hungover, which is every alternate day anyway, so there is no real complaint on the choice of beverage.

Today, for example, you’ve had to wait till 3:04 pm for him to get on Twitter. You see that he’s ‘hearted’ some controversy about an indie musician. You jump into his DM.

You’ve always wondered if calling him a fucker makes you seem irreverent in his eyes. Then again, the desperation and fawning that follows in your messages pretty much obliterates any power you might have once had in this relationship.

He must be in a good mood; he’d never submit to coffee otherwise. Play it cool, you tell yourself.

I dunno, I am busy today fucker. Afternoon meetings happening that I know are going to take longer than it should.

Even here, calling him fucker seems to be forced. You cringe as you read your own message to him. You’re already regretting the ‘too-cool-to-meet-today’ message, because why would you dig your own grave like that?

Fuck fuck fuck, why did you think he wouldn’t act as cool and uninvolved? Now, how are you going to get him to meet you today and still save your personal dignity?

But then there are the birds. It’s what saves you from being another dirty urban stereotype that’s as irrelevant and unsustainable as living in the city. Yes, you’re a middle-class married woman having an affair with a married dude. But you didn’t meet him on Tinder out of boredom, you didn’t work with him on late-night presentations that turned into triple cocktails and quick hotel room visits that got you home before 1 a.m., still very much under the pretext of a late night at work.

It was because of the goddamn birds. Pigeons and crows, to be exact. You saw him kneeling in the middle of the street taking a picture of two crows looking down at a dead crow.

You found yourself walking towards this man. And he looked up to you and spoke to you like an old friend.

‘You just missed the murder.’

‘The bird was murdered?’ you asked back, just like he was an old friend too.

He tells you that murder is actually a word for a gathering of crows. Some gatherings are actually a funeral. Crows gather, communicate, grieve, and use the opportunity to plot the demise of the enemy that killed it.

‘Did you know crows can’t forget a human face?’

This 18-month pattern, the one where you take the onus of communicating with him only when he is far from his wife’s reach, the one where you take the seemingly effortless labour of showing up at his favourite bar – these are all things you did later. After the important stuff, like the birds. Like the day you fell in love with him. When he said, ‘Pigeon shit is important, city folk go about creating ways to avoid it like it’s a national threat, but it’s a sign these birds are alive. We’re talking about human inequality? I want to ask you, what about bird inequality?’

You know that he has this way of saying the serious things in the form of jokes for you to laugh at. And so, you did. You laughed at all of it, and he allowed you to giggle unabashedly into his shoulder, which was often covered by the long sleeves of a checked shirt. That’s when you realised – you could not get his smell. There had been a distinct smell with other lovers, but not with him. You breathe him in, but you still can’t find it. It upsets you because you want to have a sensory memory of him at night as you sleep next to your husband. Not with him though. There are nights when you think your mind will burn in insanity just because you can’t fathom the smell of his shoulder covered by a checked shirt.

Now, in Twitter’s DM-verse, you write back with a straight head.

Nah, fuck it, you are way more important. 2 hours, see you.

He sends you a heart. It’ll do for now, anything more from you would diminish both your heart and mind.

The other important thing to consider is how he changed your entire point of view towards life. Yes, you notice crows and pigeons, no matter where they are – on the ledge of your veranda, on the trees, on the roads. You’ve even started talking to them. But that’s not the important thing.

Since you’ve been with him, you’ve been able to do two things you’ve never done before. The first is to see the pathetic nuisance that is your job with its toxic people and its relentless demands. Subsequently, you’ve stopped caring about it. When you stopped caring, you saw the true miracle: the whole world didn’t collapse. You realise that this massive company that you work for was always built on such a profound level of mediocrity that all your diligence, discipline, and work ethic counted for nothing because there was no possible metric for them to value it on.

So, not caring really made no difference. No one noticed, no one called it out. Which was really fine by you since it gave you more time to do the other important thing that has come up in the last 18 months – your ability to sketch. Not just sketch as a hobby, although that’s the limitation you’ve put on yourself. But sketch with such talent that you’ve awed your husband, his friends, and everyone at work. It was like you had this artist gene in you, but you were unaware of it till something in the universe provoked you to pick up a pencil and sketch. You’ll deny it, but the first thing you tried to sketch was abstract art, but really, you were trying to sketch his smell.

But then it led to more – to crows (of course), then to your husband’s face (that one impressed him so much he had it framed and put in the bedroom). Now your supportive husband is asking you to ditch work and sketch full-time. But you know you can’t since it’s work that allows you the flexibility of meeting him. The excuses that come with it, the timings that can be so unpredictable. You are now an independent woman who will not compromise on her financial independence for the love of a man who loves birds. A man you can only contact when he tells Twitter he’s ready for you.

Two hours later, you walk towards his favourite bar. You dab some red on your lips and smell your armpits. Your heart wants to explode with love and anger. But mostly, it wants to explode from helplessness, the kind of helplessness that makes you walk with such purpose towards him, the very same helplessness that makes you want to be hit by a bus on your way to him. After all, these companion feelings of attachment and detachment, experienced simultaneously, are a sign of love. He was the one who told you that days ago.

You are almost entering the bar when you remember that one time in the park, eight months into your affair. He had very confidently brought his daughter to the park on his shoulders. He was banking on the fact that her innocence as a toddler would prevent her from understanding the body language of lovers having an extramarital affair. It was a good bet to make because his daughter looked at the sky and mumbled the words of a song you can’t remember anymore.

You had only asked for 15 minutes that day. You had wanted to give him a piece of paper with your fears written on it. You had taken hours to write, to make them seem assured, intelligent, loving, yet frightened.

He had looked at his daughter and asked her to take the questions from me. She reached out with her tiny hands and snatched it away. You urged him to read them, then and there. You wanted to see if the lines on his face would criss-cross in concern, if your fears would hit him with the same force they hit you with every day.

Instead, he ushered you to the park bench. Both of you sat there, his daughter still on his shoulders, playing with his phone. He took the paper, crumpled it, and put it back in your hands. He told you there was nothing to fear, squeezed your hand and told you he’d see you the next day. You watched him walk out, slowly blurring out of sight onto a residential street.

That’s when you saw a large crow right in front of you, its wispy feet on the orange terracotta-tiled walking path. Its beady eyes stared right into yours, it cocked its head, and your neck moved sympathetically to the right. It stayed there for a full 30 seconds, and for every one of those seconds, you asked the bird if it would forget your face. 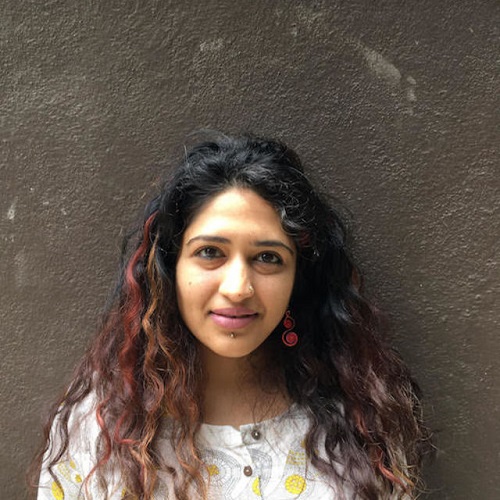 Rheea Mukherjee is the author of The Body Myth and was shortlisted for the TATA Literature Live First Book Award 2019. Her work has been featured in the Los Angeles Times, Buzzfeed, Scroll.in, Electric Literature, Out of Print Magazine, and Southern Humanities Review, among others. She co-founded Bangalore Writers Workshop in 2012 and currently co-runs Write Leela Write, a Design and Content Laboratory in Bangalore. You can follow her on Twitter.