Gandhi@150: What We Can Still Learn From Him

Gandhi is such a historical figure that you’d be hard pressed to find an Indian who hasn’t grown up hearing or reading about him. He’s one of the few Indian leaders who is acknowledged as a truly inspirational man across the world. This year, as India, and the rest of the world, celebrate his 150th birth anniversary, I found myself wondering how relevant is he or his philosophy today?

I turned to the recently released book, Gandhi @ 150, which is a collection of essays on and about Gandhi, compiled and edited by Rajan Welukar. Late Justice C.S. Dharmadhikari has penned the foreword, where he has written, “Gandhi preached an ecologically sustainable mode of development, the decentralization of social-economic power and the fostering of communal harmony based on people’s initiative rather than state power.” There is no denying this, no matter what your beliefs on Gandhi may be. But, so what? What does India need now, and can understanding Gandhi’s philosophy help us resolve some of our issues? 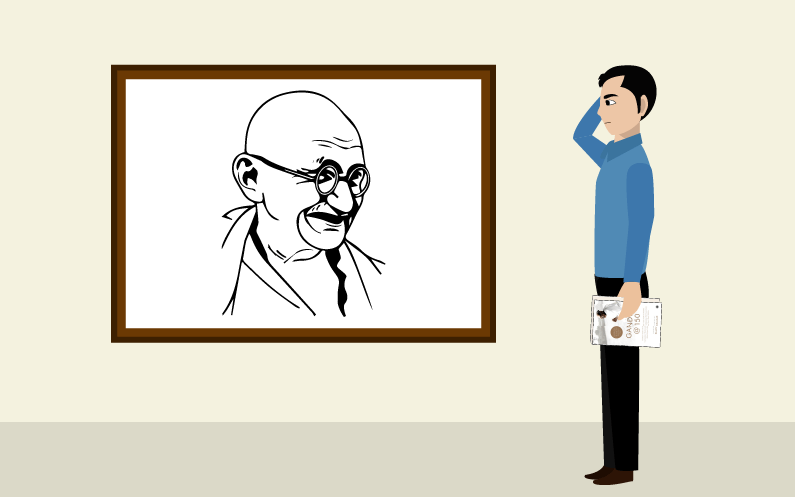 Why Non-Violence Is The Need Of The Hour

Usually, the first thing we think of when Gandhi’s name is mentioned is his staunch belief in the power of non-violence, or ahimsa. There is almost no nation left on Earth which isn’t plagued with some kind of violence- whether internal or external. Terrorism, today, is a global concern. Perhaps turning to Gandhi and trying to understand his beliefs can help us see if they are applicable to us as a means of combating terrorism.

Former chairman of the United Nations Disarmament Committee, Douglas Roche, has written in his essay that when Gandhi was asked about his thoughts on the atom bomb that fell on Hiroshima, he said “non-violence is the only thing that the atom bomb cannot destroy. I did not move a muscle when I first heard that the atom bomb had wiped out Hiroshima. On the contrary, I said to myself, ‘Unless now the world adopts non-violence, it will spell certain suicide for mankind.’” Roche advocates for nuclear disarmament and says that Gandhi would be devastated if he were to find out that India was now a nuclear state. It is likely that he would make disarmament his priority.

While I cannot say I completely agree with Roche’s sentiments, it did make me realise that we need to discuss nuclear warfare more seriously. There are approximately 14,000 active nuclear warheads in the world right now, of which we own approximately 140; these are scary numbers. It is safe to say we are sitting on a tinderbox. Most of us living today have not seen the devastating effects of an atom bomb first hand, and though a nuclear war seems like fodder for apocalyptic books, the threat is very real. War and violence come easy to us, but we need to think along Gandhian lines, we need to think of non-violent options and see how we can love, and not kill, our neighbours.

And this may not seem as hard or abstract as it may appear. In his essay, Human Resources Development expert, Bhagban Prakash, writes that “[Gandhi] took indigenous ideas like truth and non-violence out from the inaccessible pages of abstruse philosophy and ‘transformed them into a dynamic concept by realigning ideas and methods that had not been thought of or practiced earlier.’” This is the need of the hour. Prakash and many of the other essayists extol Gandhi’s non-violent methods, such as organising peaceful protests, marches and fasting to prove a point. We should see how we can adapt these to the current times, and peacefully make the world a better place.

Rajya Sabha member and senior editor, Kumar Ketkar summed it up beautifully in his essay when he said that all of Gandhi’s communication used words of love, and they were far more effective in galvanising an entire nation, as compared to the kind of hate-filled rhetoric we see on social media today, ironically, a medium which has far more reach than Gandhi ever did.

While I understand practicing non-violence is not black or white or very easy, if we adopt it as our guiding philosophy, we will surely see a change in the world. Imagine waking up and not reading of rapes, murders and communal violence in our dailies? And non-violence goes hand-in-hand with forgiveness. I was particularly inspired by Gandhi’s line, as conveyed by former vice-chancellor and President of The Open University, Brenda M. Gourley, in her essay- “[Forgiveness is] the ornament of the brave… Forgiveness liberates the soul, it removes fear.” 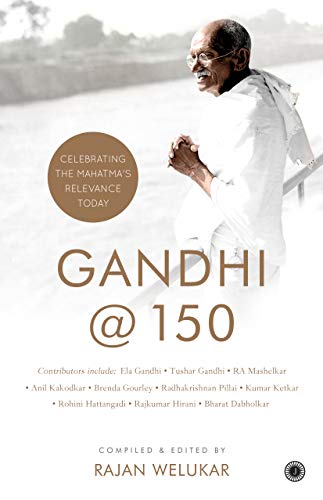 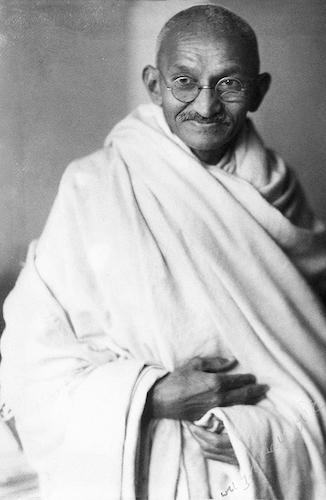 Why We Need To Be More Religiously Tolerant

Wars are and have been fought over religious beliefs and intolerance. One’s belief in the superiority of their chosen religion often outweighs the value of someone’s life. And this is only getting worse. In my conversations with some right-leaning Hindus, I have heard them criticise Gandhi and say that he didn’t stand up for Hindus enough and is as responsible for Partition as Jinnah. But, this is grossly incorrect. Gandhi, in fact, believed in one’s freedom to practice a religion of choice, and not being discriminated against, institutionally or socially, for this choice.

One of the contributors to Gandhi @ 150 is Tushar Gandhi, Gandhi’s great-grandson. Almost his entire essay is dedicated to Gandhi’s belief in the value of multiple religions existing and thriving in India. Gandhi himself was an ardent and deeply religious Hindu, but he did not impose his views on anyone else- be it his belief to not eat beef or to pray every day.

He strongly advocated against India becoming a Hindu rashtra. In Satyagraha In South Africa he wrote the following:

One has to ask a tough question- is India moving towards becoming a secular state in name only? That, of course, is a larger debate, but one cannot deny the fact that a stauncher, and more dogmatic, belief in one’s religion is no longer unusual. Many are willing to kill because of it. It is imperative we remember Gandhi’s lessons today and start being more open about respecting others’ religious beliefs, and whether an individual chooses to be a Hindu, Muslim or atheist, it is their prerogative. 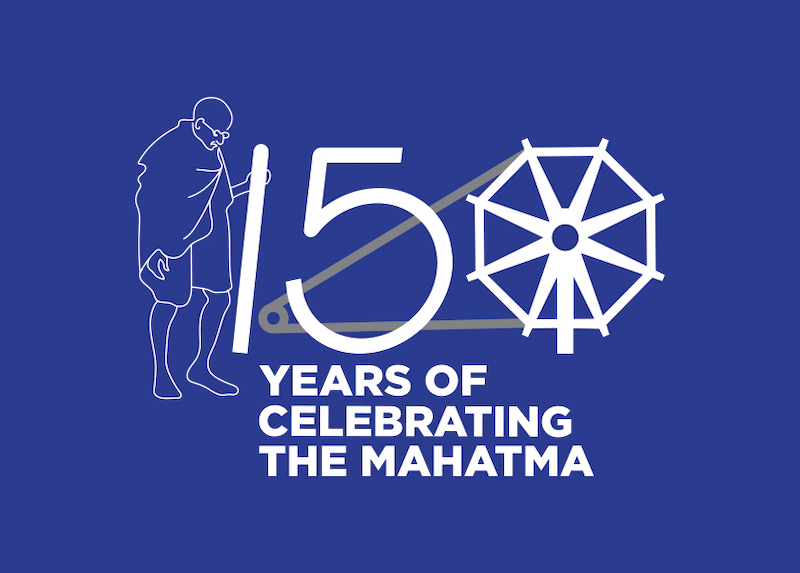 Why We Need An Overhaul Of Our Education System

Anyone who has studied in India will attest to the fact that our education system leaves a lot to be desired. We focus way too much on rote learning and not on actually absorbing knowledge. This is perhaps why the MD and CEO of Maharashtra Knowledge Corporation Limited, Vivek Sawant, is so inspired by Gandhi’s philosophy on education. It was Gandhi who conceptualised the concept of SUPW (Socially Useful and Productive Work) and realised that conceptualising, experimenting, experiencing and reflecting is the best way to acquire knowledge. Gandhi further derived nai talim or ‘new education’. In it, work and knowledge are but two sides of the same coin, with one leading to the other.

We are slowly seeing new approaches to education, such as Waldorf Education, curry favour amongst Indians. The International Baccalaureate Diploma Programme is fast becoming the programme of choice for those who can afford it. Ironically, after reading Gandhi @ 150, I realised that Gandhi preached many of the systems both follow. Former vice-chancellor of Gujarat Vidyapith, Sudarshan Iyengar, also advocates the adoption of a Gandhian education system. He talks about how, back in Colonial India, the need of the hour was to train Indians in agriculture and in making their own clothes, and by empowering the common man with the know-how, he enabled them to peacefully fight the British. I have to ask, what is the need of the hour now? How can we become better citizens and fight against all the ills in the world? Certainly not by rote-learning the date the Battle of Plassey was fought, but probably by studying how we can use technology to save our planet. Gandhi showed us how to improve our education system, it is up to us to implement it now.

“If Humanity Is To Progress, Gandhi Is Inescapable”

These words may sound grandiose, but I have not said them; they were, in fact, said by none other than Martin Luther King Jr.. And while I think he is being unfair to the many great thinkers and leaders of the world, after reading Gandhi @ 150, I can see why MLK Jr. would think so.

Professor Raghunath A. Mashelkar says that one of Gandhi’s main tenets was “Earth provides enough to satisfy every man’s needs but not every man’s greed.” This is exactly what we need to follow now. We lead stressful and complicated lives, eat unhealthy food and are damaging the Earth beyond repair. It is time we return to a simpler life, consuming only what we need, not what we want.

Gandhi still has the power to inspire, if we let him. Ask noted film director and producer, Rajkumar Hirani, who made Lage Raho Munna Bhai, a blockbuster film based on Gandhi’s philosophy of life. After the film released, he saw Pune traffic police give flowers to speeding bikers instead of challans and the bikers returning the favour by driving more slowly. This is the power of Gandhi’s philosophy, which Hirani calls Gandhigiri.

We’re living in a climate where things are ridiculously divisive. Politicians are tearing each other apart, communal violence is all too common and we can’t seem to agree with our neighbours on most issues. The only way to bring about harmony is by coming together as a nation. If Gandhi’s teachings on the power of love, non-violence and religious tolerance aren’t valuable to us today, then what is?

All essays/quotes in this article can be found in the book Gandhi @ 150.