The Queen Of Jasmine Country

My grandfather believed that even if women could know scripture, they could never learn to read the verses, only to hear them and thereby consecrate them to memory. He said this was because of an innate female capacity for the same. To absorb.

But when Padmamma began to bring me scraps of writing to read to her – unbound palm leaves from almanacs, miscellanea from parchments found in temples, something that had fallen into her wares in the marketplace, carried amongst a trader’s wares from another village – I watched her curiosity and diffidence and understood. One day, as an experiment, I lied to her. I replaced all the nouns in a line. Papaya became bitter gourd, the sun became the moon. She continued to listen as though nothing was out of place, processing the words I spoke without question, watching my finger as it underlined the lines. She never dared to pick up a bound or complete text, although we had many in our home. These scraps were all she felt were permissible for her to look at, and through me she had access to them.

Once I saw what it means for a woman to be writless, I began to devour words with the knowledge that this was the only miracle of my life – to have them. To know them, and myself through them. To recognize them on sight. First, Vishnuchittan taught me how to read and then allowed me to take his materials – his holy texts and his own poetry and others’, collected from temples and bartered for from traders – even without his supervision. As for Amma, she neither dictated things to be written down nor did she take particular notice of the presence of calligraphy anywhere. In this way, she maintained concord with the ways of my grandparents. Of her own parents, she rarely spoke.

But on some nights, my mother and father would linger a little while on the thinnai, our clean-swept front porch with room enough for a pilgrim to sleep on, after lighting a brazier of neem leaves to ward away insects, waiting for my grandparents and me to fall asleep. And I would be able to hear his lilting voice read to her. Softly. I could see his small lantern burning if I turned my head just so from my mat. I could never hear or see my mother’s reactions, but years later when the verses of the Kuruntokai broke in me a dam I did not even know I contained, I could imagine them. How it must have been for her to be offered words strung together like garlands, their sentiments so vital even after a thousand years that bees would still spin intoxicated if they heard them. Later, I would come to envy her. For I was certain she had never known it, what it was like to weep until the place between her breasts filled up with tears, became a pond where a black-legged white heron fed, how it felt to have her whole body turn into a landscape where life thrives, tenacious, but in the absence of touch. 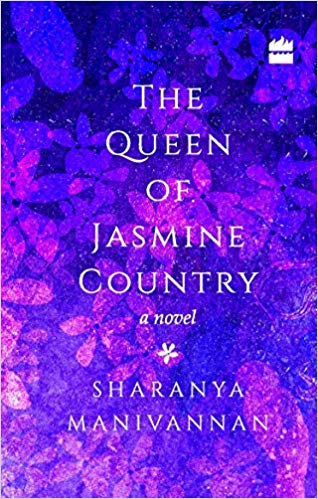 Sharanya Manivannan is the author of the short-story collection The High Priestess Never Marries, which won the 2015-16 South Asia Laadli Media and Advertising Award for Gender Sensitivity (Best Book – Fiction) and was shortlisted for the TATA Lit Live! First Book Award (Fiction). The Queen Of Jasmine Country is her first novel.

Excerpted with permission from The Queen Of  Jasmine Country, Sharanya Manivannan, Harper Collins available online and at your nearest bookstore.