The Making Of Hero

In 1983, the year the internet was born, Honda invited my father to Japan for a final meeting. That was the year that the Indian government permitted joint ventures in the two-wheeler sector, as my father had anticipated. Draft agreements on the proposed joint venture had been exchanged previously. My older brothers, Raman and Pawan, were actively involved in the project from the very beginning, right from the negotiation stage.

A three-member team led by my father left for Tokyo. My oldest brother, Raman and Amit Chaturvedi, accompanied him. Describing the trip, Amit says, ‘Ramanji, Brijmohanji and I went to Japan in October 1983. Ramanji was keen that I go, even though Chairman Saab was a little hesitant, but he went along with Ramanji’s view.’

At precisely 2.30 p.m. on the following day, the Hero team sat across the table from the Honda representatives. Simultaneously, the family got together in the conference room at their headquarters in Ludhiana. Telecommunications in India had improved to the point that they could monitor events from 5,850 miles away.

Honda had a surprise in store. They told the Hero team that they were ready for a joint venture in motorcycles. At the same time, they would also be entering into a joint venture with the Firodia group to manufacture scooters. The Hero team’s jaws dropped. They had come to discuss a venture for scooters, but now were being offered motorcycles! For a few stunned moments, my father stared at the Honda representatives. Then he turned his head to look at Raman, who appeared imperturbable, as if unaffected by the astonishing news. He caught his father’s eye and almost imperceptibly inclined his head towards the door.

My father got the message and requested the Japanese to excuse them so that they could discuss the matter. The Hero team left the room. They needed time to absorb the implications of Honda’s offer. My father called up the family in Ludhiana, who he knew would be waiting anxiously by the telephone. They were bewildered. ‘How can we produce motorcycles? People in India want scooters,’ observed uncle Om Prakash.

This was uncharted territory. They had no idea whether motorcycles had any major market potential. After protracted discussions over the telephone all through the afternoon and early evening, they were no nearer to reaching a decision. At this point, my father’s instincts took over. He knew that the family’s appetite for risk was limited, but if he wanted a collaboration with Honda, it was time to take another leap of faith. Infusing as much confidence in his voice as possible, he declared: ‘Let’s do this. Dekhi jayegi. Cycle aur moped banayi hai, yeh bhi bana lenge’ (Whatever happens, we’ll see. We’ve made cycles and mopeds, we’ll manage this as well).

The decision was taken. It was yet another turning point for the Hero Group. The family were now committed, come what may. It was a big investment for a company of Hero’s size, but they would make it work.

Honda explained their decision. Their teams had been impressed by Hero’s engineering capability and had chosen to partner with the group because they saw scale. Yes, it was an unexplored market for Honda. But with a strong partner, they were convinced that their motorcycles could make a mark in India. None of the existing players, although admittedly strong brands, could boast the combination of quality, economy, fuel-efficiency, distribution network and after-sales service that a Hero-Honda JV could potentially pull off. India’s rapid increase in population was bound to be matched by an exponential growth in demand. If Hero was making a leap of faith, so was Honda.

At the negotiating table, my father – his convivial and pleasant persona notwithstanding – proved a tough customer. He focused on micro-details. Amit would later comment that he believed the granular approach was deliberate. My father was deeply aware that Hero was on the brink of a great opportunity; at the same time, he wanted to ensure that Honda did not walk away with additional advantages because of its privileged stature. Amit recalls that he and Raman had to convince him that some level of give and take was necessary. They would call for a break and hold rapid-fire discussions in Hindi and Punjabi.

Honda first offered a CD 90, which was then very popular in Pakistan and a few other Asian markets, on the assumption that India’s market was similar. But my father insisted on a bigger frame and a bigger seat, so that two people could sit comfortably and ride safely. The idea of the motorcycle as a single-rider vehicle, as compared to the scooter which was a vehicle for two, had to change. He also wanted a sari guard, because he imagined women sitting pillion. He made it clear to Honda that he wanted the CD 100.

He was also insistent on fuel economy: the vehicle would have to deliver 100 km to the litre. A long argument ensued. The Japanese held that it was impossible for a 100 cc engine to give 100 km per litre (kmpl), at best they could manage 65 kmpl.

My father stuck to his guns. The engineering and R&D teams were summoned and, finally, after much wrangling, they compromised on 80 kmpl!

My father was dogged in other ways as well. He insisted on vegetarian Indian meals, which meant that the Honda officials had to find Indian restaurants. He didn’t like tea with powdered milk, so fresh milk had to be procured. Amit says he later realized that these moves were tactical: ‘His very tenacity won him a lot of respect from the Japanese. I had negotiated with the Japanese during the Escorts JV, but I had not seen them show as much respect for Indians as they had for Chairman Saab or Lal Saab (as my father was known) … they had figured that he was the driving force behind Hero and could help them succeed in India.’ 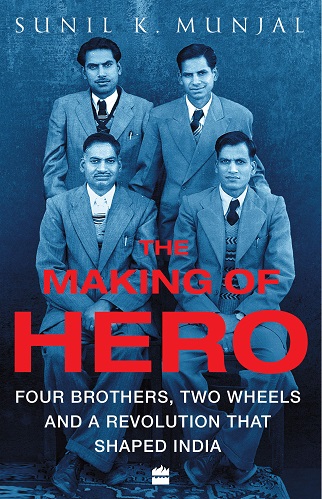 Sunil Kant Munjal is the youngest son of Brijmohan Lall Munjal, the Founder of the Hero Group. Besides setting up many new enterprises and providing strategic inputs for the Hero Group, he was previously joint managing director of Hero MotoCorp (formerly Hero Honda) and is now the Chairman of Hero Enterprise, with interests across diverse service and manufacturing businesses.

Excerpted with permission from The Making Of Hero: Four Brothers, Two Wheels And A Revolution That Shaped India, Sunil Kant Munjal, HarperBusiness, available online and at your nearest bookstore.