‘You asked Rashid if there really is a Junaid of Fatehgarh,’ I tell her. ‘There is.’ I bow. ‘What can I do for you?’

She blushes in a moment of confusion. More than pretty. ‘I’m sorry,’ she says. ‘I didn’t know quite what I expected.’

‘A very common problem,’ I tell her, disarmed.

‘It’s just that …’ She seems to run out of steam, then manages to raise some more. ‘You know, my great-grandmother still talks of a Junaid of Fatehgarh from fifty or sixty years ago …’ Her voice trails off again.

‘Ummm …’ It all begins possibly to fall into place. ‘Your great-grandmother,’ I tell her. ‘Perhaps you could tell me where she came across this Junaid.’

‘In Fatehgarh, where else!’ She laughs. ‘I’m getting this all wrong,’ she says. ‘My name is Alice Munro, and my great-grandfather used to be Political Resident in a little kingdom called Fatehgarh in the north of India, and Gram – that’s my great-grandmother – keeps saying the king had a chef called Junaid who used to serve the most delicious spicy food that didn’t give any of them, ermmm, well, Delhi belly.’

‘Ah!’ I tell her, the link established. ‘That must have been my own grandfather. He used to cook for the Nawab and his guests. The gentry of his time, of his land.’ I bow again. ‘As I hope to do here, now.’ A question strikes me. ‘But how did the Resident’s wife happen to know of a lowly cook in the years between the wars?’

She laughs again. ‘I never thought of that … You know, Gram’s getting on for a hundred, and she says she loves Indian food. But when we get her Indian, from one of the curry restaurants near where she lives, she absolutely hates it!’

‘Well, she says it’s nothing like the real thing, and the real thing is always what Junaid of Fatehgarh used to make. That was the best she got at the Nawab’s table. But she’s mostly in a wheelchair now, and her short-term memory’s a bit, well, incomplete, some of the time.’

‘I wish you could bring her around one of these days,’ I say. ‘I’d like to know if the new Junaid is as good as his grandfather.’

‘We aren’t likely to now, are we, with Gram stuck in a wheelchair?’ she asks.

‘Maybe I can stand in for her today,’ she says. ‘What do you recommend?’

‘The murgh achari,’ I tell her without hesitation. ‘With naan, and a salad.’ I pause. ‘Anything else would be as good, but this chicken dish has all the spices that Punjabi pickles do. Ummm …’ I hesitate.

‘Use your fingers. It’s best to dip a bit of the naan in the gravy just before you eat it.’ For no reason that I can see, I feel compelled to explain. ‘So the naan absorbs some without going soggy.’ She laughs again, without reservation. It’s a jolly, honest sort of laugh, and afterwards she looks a bit concerned, as if she laughed out too loudly. She looks at her fingertips, at the varnish on her nails, and up at me. I shake my head. ‘No, the varnish won’t spoil the dish, or the dish your varnish.’

She nods. ‘I’ll take your word for it. Thank you.’

She gets her achari five minutes later, puts the knife and fork aside, and uses her fingers on it. After a professional lifetime spent watching people eat, I’ve found that the way people eat tells a lot about how they are. There are the predators, the chargers, the picky ones, the tentative ones … But this girl eats with care. Not carefully, to avoid having gravy drip down the front of her dress, but caring for the food, so she gets the best of what she eats. She neither hurries nor loiters, dipping small pieces of the naan in the gravy, learning, as she eats, just how long to soak it to get the best of it.

She finishes her lunch in twelve minutes, the self-consciousness disappearing with the naan. I go back to her table as her finger bowl is cleared. ‘How was it?’ I ask.

‘Fabulous,’ she says, smiling up at me. ‘Now I know what Gram meant!’

‘You don’t know how much that means to me,’ I tell her. ‘May I recommend a dessert?’

She belches softly, genteelly, behind a napkin. ‘No, thank you,’ she says emphatically. ‘I’m too full. That was really good. Maybe next time.’

‘I’m glad there’ll be one!’ I tell her. The restaurant has filled up by now. ‘If you’ll excuse me,’ I tell her. ‘This is the busiest hour of the day.’

‘For the great-granddaughter of a fan of my grandfather’s cooking, ma’am, there is no charge.’

Again that jolly, honest laugh. ‘Thank you so much!’

Again without knowing why, and much against my business instincts, I add, ‘In this house, there never will be.’

At the door, she turns to look back, wiggles her fingers at me and disappears down the stairwell. A moment later, she melts into the crowd on the pavement outside. 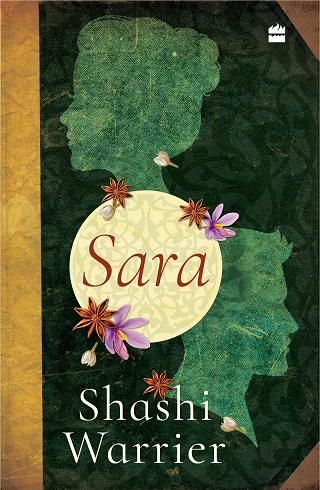 Shashi Warrier is the author of Hangman’s Journal and The Homecoming. He is an avid biker and has travelled around India on his Royal Enfield Thunderbird, and is currently based in Mangalore.

Excerpted with permission from Sara, Shashi Warrier, Harper Collins available online and at your nearest bookstore.