He’d secretly written the entrance examinations at the Military Academy in Dehradun, passed them, and signed up to train as an officer. Without seeking permission from his parents.

Inder was in silent shock. ‘Why?’ Ajit demanded.

‘I have learned a lot in two years of college, Bapuji. This is the path I’ve chosen.’

‘But you are an only child, an only son,’ Siamo said, tears streaming from her eyes.

‘I have the right to choose my future.’

‘You are in line to be a zaildar.’ Ajit wanted to shake his stubborn son by the shoulders.

‘I do not want to be a tax collector who has to harass poor people, threaten and punish them. I no longer find it desirable for me.’

‘There is a nasty war going on,’ Ajit said. ‘Once you become an officer, you will be sent God knows where to fight. Did you not think about that? Or what your parents will have to endure? The torture we will suffer?’

‘Bapuji, I did it as a devoted Sikh. It is our duty to serve our country, and the best way is to fight to defend it.’

Satwant had filled out into a grown man, taller than his father, with broad shoulders and a nice beard. He had learned to tie his turban well. Ajit looked at his handsome features and his heart rose into his throat at the thought of him leaving to join the army.

Siamo sat down heavily on the floor, alarming Satwant. He pulled her up and gently wiped her tears as her chest heaved and her body shook.

Stupid martial notions. Ajit had sent his son to school to study history, political science, civics, the arts, to learn to be a wise man making his way in the world. Someone had brainwashed his son in college.

‘At least I am not becoming a freedom fighter and taking up arms against the British,’ Satwant said.

Ajit had to agree—that was worse and sure to lead to tragedy. Freedom fighters were avenging the terrible atrocities committed by the British against Punjabis. No one had forgotten the Jallianwalla Bagh massacre of 1919. Hundreds had been killed. But the desire for freedom had not dampened. The Sikhs were collecting a lot of martyrs this way. Bhagat Singh and Udham Singh were the two most admired. They’d been hanged. And was this the right time, while the whole world was at war, to be spitting in the face of a great empire? They might be simply overthrowing one master to take on another, and worse.

Ajit felt a bit of relief. ‘Who talked you into this?’ he asked. ‘I was counselled by the Colonel.’

That bastard. He knew that Satwant was Ajit’s only heir. He would go the very next day to confront the old man. Give him an earful.

‘Bapuji, if the Japanese end up conquering India, we will be a lot worse off than we are right now. You should read what atrocities they wreaked upon China, Korea, and Singapore. They cannot be allowed to occupy India. People will be killed by the millions. We will end up in perpetual slavery.’

‘Go speak to your mother. What is done is done. Explain yourself to her.’

Slowly climbing the staircase to his room, he heard Satwant begging his mother to listen to him.

Ajit marched into the recruiting office in Ludhiana to give the Colonel a piece of his mind, but he came away feeling chastened.

‘Yes, I did encourage your son to take officer training. So? You yourself have encouraged dozens of other men’s young sons to join the army, and drawn healthy stipends for doing that, Zaildar,’ said the wily old Englishman. ‘Remember Sergeant Bikram Singh? Was he not the only son of his parents? Where was that fatherly concern when you herded him through that door?’

Was Satwant’s decision a matter of karma? Ajit’s only comfort was that the Colonel had promised to secure for Satwant a noncombat posting. Now, wandering through the bazaar in Ludhiana, he spied an astrologer sitting on a gunny sack on the curb; in front of him burned a stick of incense. Ajit had never had his palm read— he was not the sort who was eager to know the future, in case he didn’t like what he heard—but given his uncertain circumstances and troubled mind that day, he decided to take the chance.

The astrologer, a Brahmin with a tonsured head and a forehead lined with ashes, looked up and gestured for him to sit on the ground before him. Ajit looked around first to see if there were any men he knew nearby.

‘Tell me the details of your birth.’ The astrologer picked up a well- thumbed notebook and a small pencil.

Ajit recited the facts as best as he could and watched the lines and symbols the man drew on the page. The astrologer studied them for a long while before he said, ‘Show me your right hand.’ Ajit spread out his palm. The astrologer studied it, holding it in both his hands, turned it, twisted it, and spread it, mumbling to himself. Then he sat back and held Ajit’s gaze for a disconcertingly long moment.

‘You are carrying a secret.’

‘You are carrying a secret.’

‘Like what?’ ‘A significant secret. It is troubling you.’ 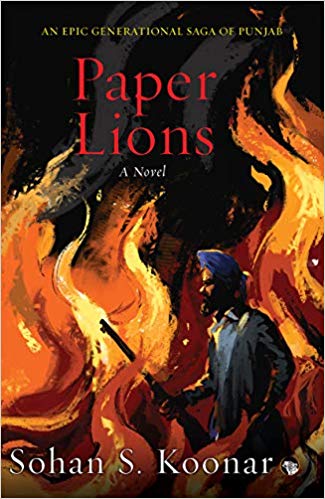 Sohan S. Koonar is a physiotherapist by training, the founder of a multi-clinic company and an inventor with international patents, Sohan’s passion for storytelling won him the Judges Choice Award in the Toronto Star Short Story Contest and the first Burlington Library Literary Excellence Award.