Clara wondered why she had persevered to reach Benares. What bonds tethered her to this mystical, holy city? She pushed a dictaphone towards Mungia and pressed the record button. “How long have you lived in Benares?” she asked.

Mungia’s eyes reflected the burden of a mundane, century-old existence.

“All my life… millions come to Benares in search of answers. But only a few thousand are steadfast in their vow of piety. Of the thousands, there are but a few who have the stock of merits to meet a true sage who will help them cross over.

Of these, there are hardly three or four who attain liberation.”

The deeper aspects of the conversation may have escaped Clara, but Mungia’s words ignited a spark of hope in her.

“You seem to have made your peace with the world, Mungia. How does one keep that peace?”

“You put fences around it and trap it!” Mungia retorted.

This made Clara laugh. Mungia noticed how radiant she appeared when her heart opened and pushed through the veil of despair that hung over her like a dark cloud.

“We’re almost there,” Mungia said, pointing to a silhouette on the ghats.

Clara could barely discern the shrine amidst a multitude of compact houses crammed together along the river. But then the boat rocked closer, and just behind the ghats, few hundred metres above the ground, a white marble shrine held by pillars came into view. Gold engravings of flowers on the pillars caught the glint of the morning sun and quivered with brilliant incandescence. Playful monkeys danced on the roof of the shrine to the musical tempo of bells tolling in an insistent call for God’s attention.

Clara felt lured by the shrine for reasons she couldn’t fathom. When Clara first heard about the shrine’s mystical energy, she had dismissed it as the zealous exuberance of believers, but then she discovered the shrine’s history.

Its benefactor was a British man by the name of Lawrence Helix.

Clara knew that many white explorers had traversed Indian grounds in metaphysical enquiry, but there were no records of Lawrence Helix’s journey in any library in England. It was almost as if someone had deliberately wanted him erased from the pages of history.

A tingling excitement ran through Clara as the boat pulled up by the shores of the narrow ghats. Mungia started his ascent up the stairs as quickly as his doddering limbs could carry him. Clara was astounded by Mungia’s remarkable agility for someone his age. She looked up at the challenging forty steps leading to the shrine that was set on elevated ground, feeling diminutive under the pillars of the shrine.

At the top of the stairs, Clara followed Mungia to a white marble platform built to sanctify the shrine. It was decorated with a garland of rosemary beads and a miniature granite hut that stood at its front. Mungia took five sandalwood incense sticks, lifted the granite hut’s sloping roof and dipped his hands inside. In a moment, his hand emerged, holding all the incense sticks aflame. He placed them on five holders; thick smoke curled up into the sky, releasing a fragranced sandalwood aroma.

Clara inspected the granite hut and frowned. It was enclosed from all sides with no ventilation. Could embers flickering inside the hut survive without oxygen, or had she just witnessed a trick? Clara stood by the marble platform, awaiting some magical energy to whoosh her off her feet, but nothing dramatic occurred. After a few moments, Mungia led her on.

“What exactly is under the shrine?” she asked Mungia.

“It holds the body of a sage. Since the bodies of super yogis do not decompose, we do not burn them. The place of their burial resonates with their vibrations long after they’re gone.”

“Therefore, they can ignite incense sticks just like that… without matches?” Clara peered into Mungia’s eyes, searching for signs of deceit.

“A man is buried, but is also somewhat alive in there?” she pursued. “It is energy. Energy is life,” Mungia countered patiently.

“And this energy comes just like that from the shrine?” “Yes.”

“And you really are one hundred and twelve years old?” “Yes,” came Mungia’s monotonous reply.

Clara clicked her tongue. Her editor always said that she had a knack for pulling stories apart. She was beginning to have a brooding suspicion that this particular endeavour would prove to be a wild goose chase of Indian fantasy wrapped in surreal reality, later to be shoved down gullible throats.

“I’m afraid my leg doesn’t feel so good. I should head back,” she said, putting on her most apologetic smile.

“That will not be possible, my dear. There is a high tide, and we cannot take the boat back,” Mungia replied calmly.

Clara frowned and stared out of the window in disbelief. Just moments before, the placid waters of the Ganges had carried them to the shrine, but now the ascending tide had submerged more than half the stone steps. Its choppy waves smashed against the elevated tearoom.

“Come to think of it, there may have been some warning of high tide,” Mungia said, as if he had expected this happenstance.

“I guess I’ll have to take the road then,” Clara grumbled.

“A truck crashed into a building last night. There is rubble all over the streets. We are blocked!” Sapna announced.

“For how long?” Clara cried incredulously.

“Until the police take action. Cleanliness is not equal to godliness in our city,” Sapna said with a shrug.

Clara had to agree. Order and hygiene somehow seemed to escape the attention of Benares residents. But the city whispered of wisdom and knowledge buried within its antiquity, which only the brave hearts, the tenacious seekers, were capable of hearing—if they persisted. At that moment, Clara was certain she was not one of them.

Mungia watched the tide smash against the tea room. One could almost dive into it from the window.

“You know, we were unlucky to catch the boat early. If only we had taken the boat now, we could have entered straight from the window and avoided those darn stairs!” Mungia said.

Clara suppressed a chuckle, which surprisingly nipped her feistiness in the bud. She found herself drawn to the old man’s charms.

“How long does it take for the tide to subside?” Clara asked.

“It could take a day or two. Like I said, we are all exactly where we are meant to be,” Mungia replied, with a benign smile.

Clara flailed her hands in surrender. She had never quite understood the fatalism so frequently referenced in Indian philosophy, which was endemic to this culture. If higher forces were conspiring against her, what choice did she have but to play along?

“I have searched through several records, but the man appears to be an enigma. Who exactly was Lawrence Helix?” Clara asked.

Mungia’s face perked up and his eyes sparkled, as he reflected on the languor and warmth of happier times with the man who had changed his life.

“I met Lawrence Helix nearly a century ago, in 1918…during the final phase of the war,” Mungia said. 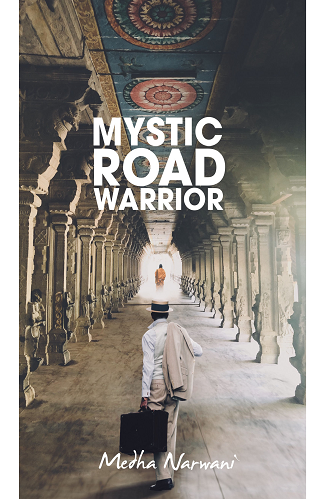 Medha, an ex-economist in London, has trained and gained expertise in two yoga philosophies, Vedanta and Jnana Yoga. She deeply explored mindfulness on her own journey to finding herself. She met and studied under various humble masters and yogis who helped steer her voyage, answering many pertinent questions. She understands the essence of spirituality and its significance to our mental health. Mystic Road Warrior, her debut novel, is a reflection of Medha’s own decade-long, soul-searching journey,