So is he really dead?’ Vidya enquired timidly from the window.

‘Very much.’ Prachand confirmed as he walked closer to the body. His stomach felt squeamish but out of some morbid fascination, he continued staring at it. And it seemed as if it was staring back accusingly.

‘Prachand, why are you still standing there?’ Vidya hissed. ‘I’m thinking.’

‘Well, you can think when we get back home. Come!’ Prachand went to the window where his wife stood.

‘Oh no you don’t Prachand Tripathi!’ Vidya knew what was coming.

Prachand pulled her closer to face him. ‘Just listen. We came here to talk to him. Clearly, we can’t do that now. But looking around for a few minutes might help. What if we find…’

‘You’ll find nothing this once but trouble Prachand. Call it a woman’s intuition,’ Vidya warned him.

‘I get your concern. But this is our only chance. Please!’

‘You go look around. I’ll stand guard here and recite the Hanuman Chalisa as well.’ She folded her hands and started praying to the almighty feverishly.

Prachand knew what he had to do first. He pulled out his handkerchief and bent down closer to Sujit Oberoi’s face.

‘What are you doing?’ Vidya shouted.

Prachand gingerly shut the eyelids. There was no possibility of rigor mortis having set in so soon, so his task was easy, yet creepy. ‘It doesn’t feel right, you know. Seems disrespectful snooping around the house while he is watching us. Besides, it is a tad bit spooky as well. I feel as if his gaze is following me around the room.’

‘Stop freaking me out, Prachand’ Vidya said, shivering. Suddenly something scraped against her leg and she jumped into the air.

The ghost revealed its identity by meowing loudly.

While Vidya was dealing with supernatural forces in her head, Prachand had started looking around. He knew he had very little time so his movements were hasty. First, he went over to the table by which Sujit Oberoi had been sitting and watching TV. There was a bowl of peanuts, some cucumber, a bottle of whiskey and a glass full of it.

‘The poor man must not have realized that this drink would be his last,’ Prachand said to himself. Then he moved towards the two nearest rooms, hoping one of them would be his.

‘Where are you going, Prachi? Someone will be along very soon. I can feel it. Come on!’ Vidya said impatiently.

‘Just a quick look in his room. It won’t take long.’

As luck would have it, he did walk into the room Sujit Oberoi was occupying. A quick peek into the other room told him that Shailaja Kapoor’s room must be at the other end of the corridor – a clear sign of less than cordial relations between the husband and wife.

Prachand felt a hand on his shoulder and it was his turn to jump in the air.

‘You scared the hell out of me.’

‘Sorry, Prachi. I couldn’t stand alone outside. I kept thinking his ghost will pay me a visit.’

‘Hmmm…’ Prachand acknowledged and walked to a suitcase that was kept in one corner of the room. Feeling a twinge of guilt, his hand hovered around the handle, feeling reluctant to open it. Vidya leaned forward and with one big movement, pulled back the top cover and opened up the red suitcase.

‘There you go. By the time you get over your guilt and open it, the police will be sitting around eating celebratory snacks after arresting us.’

He carefully went through the contents of the suitcase. ‘This man doesn’t like banks I suppose.’

Prachand turned around inquisitively. ‘Why do you say that?’ Vidya, while going through the cupboard, had found a large stash of money in one of the drawers.

Prachand whistled. ‘From the looks of it, there must be a few lakhs in there.’

‘Do you think that man came to rob him?’

‘I don’t think so. If he had come for money, he would have created some distraction to get to it despite us being there. No thief would leave so easily without the stash.’

‘I guess.’ Vidya nodded in agreement.

‘Viddu, I think Sujit Oberoi was on the run.’

‘Really?’ Vidya enquired, ‘How can you tell? Oh … wait, I’m sure you already have a list of reasons for this deduction. Lay it on me.’

‘Well,’ Prachand started holding up items as he spoke. ‘Look at the clothes. All casual: t-shirts, shorts, pyjamas, even the shoes over there,’ he said, pointing at a space under the cupboard. ‘Remember the pictures you showed me online? Even the ones from his vacation and he is dressed impeccably at all times. Almost always in formals. These just look like under the radar, casual clothing thrown together in a hurry.’ Then he picked up a stack of files. ‘Who carries their passport, cheque books and property papers for a holiday?’

‘You do have a point.’ Vidya nodded.

‘Some more proof? Look, two family pictures, not even an album, framed, like he picked them up from a table on his way out. And pepper spray? Clearly not for adding flavour to food but for protection. Don’t forget the stash of money either, so he wouldn’t have to get to a bank and withdraw. I am very certain this man was not just on the run, he was hiding from someone. Someone who was scary enough to intimidate someone wealthy and well connected like him.’

There was a faint noise audible in the distance. ‘Was that the gate?’ Vidya asked, eyes wide open with terror.

They retraced their steps to the living room and passed by Sujit Oberoi’s body.

‘Just give me a second,’ requested Prachand and delinking his hand from Vidya’s, ran back towards the body.

‘Prachand! What is wrong with you!!’ Vidya was seething now.

‘It’s for closure and respect.’ He stood next to the body with his hands folded. ‘Goodbye, Mr Sujit. It wasn’t nice of you to falsely claim having seen me but I forgive you. You didn’t deserve to die. I’ll find your murderer and he will go to jail. I promise you. Rest in peace.’

Suddenly, he realized that someone else was in the room. Looking up, he was horrified to see an even more horrified Govind standing frozen by the door.

‘Khoon! Khoon! Khoon!’ He said it repeatedly as if in a trance. Vidya instinctively shouted from the window ‘No, no, we didn’t murder anyone!’

At first Prachand thought he would go to Govind and try to calm him down, explain what happened, but his instinct said that this would be futile. While Govind continued to scream for the police instead of actually calling them, Prachand caught hold of his wife’s hand and shouted, ‘Run!’ 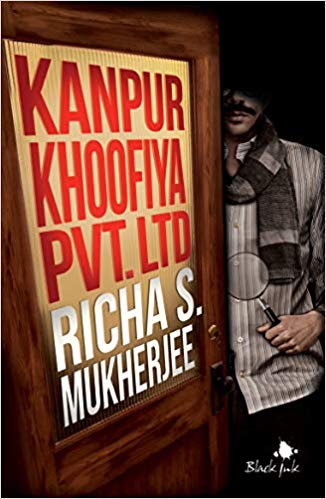