Author’s Note: Discrimination is a hard truth and a way of life in India. And, rather than apologetically accepting it, we have collectively, shamelessly and inhumanly endeavoured to deny this. Deepika Thakur’s story is more than just a tale of romance, or a narrative of life in the elite IAS and IFS. It is an exploration of the devious and subtle ways in which we seek to perpetuate our exclusiveness, even in modern times and in high society.

Kali’s Daughter chronicles Deepika’s struggle to hold her own against all attempts to boo her out and make her capitulate to an unjust social order. It is a story of courage and hope. It is a story about the power of a good woman.

She recalled her first year in college when she’d desperately wanted accommodation in the girls’ hostel attached to the university because her father hadn’t yet been posted back to Bhopal. There was only one room left at a desolate end of the hostel. The Warden, a certain
Mrs Trivedi, had the authority to decide who to allot it to. She scrutinized her application and chose another girl over her, despite that girl’s poorer marks and the fact that her father was already posted in Bhopal. ‘Social incompatibility can lead to tensions,’ she said to Deepika. It was a shocking revelation that she was viewed as a provocateur.

In school, most kids were from reasonably good families, perhaps because the Kendriya Vidyalaya was established specifically to provide education to the officers and staff of the Security Paper Mill (SPM) that manufactured high-quality currency notes for the Reserve Bank of India. It was with great difficulty that her father managed to get her admitted, thanks to Mrs Bose. The SPM staff was centrally recruited, spoke English, and their children had already been exposed to a relatively modern lifestyle, whereas she stayed with her grandparents who had themselves suffered privation, had hardly been educated, spoke only Hindi and had never gone beyond Bhopal in their entire lives.

In class, kids had derisively nicknamed her Kallo, meaning Black. Sometimes, they would scoffingly call her Kalibai. Perhaps, she reasoned, it was because of her complexion that she was compared to that Tantrik Goddess – always depicted as black with a fiery countenance — worshipped secretly by some families like hers – they could easily identify with her dark colour and get away with revering her unobtrusively. The others tolerated that only because they preferred and maintained a stranglehold over Gauri, or Mahalaxmi, or Mahasaraswati, the fairer and more exquisite versions of Adi-Shakti – depicted in gold ornaments and attired in lighter, lotus-petal coloured garments – and housed in opulent temples.

She had been much darker then, perhaps because she was leaner, almost gangly, and spent long hours playing chhupan-chhupai and gend-tadi in the sun, and she had long, jet-black hair that she tied around into a tight knot when out of class. She could outrace all kids her age, even the boys, and beat them in all kinds of sports. Some of them had composed a funny line that they would sing in unison to tease her when she performed well:

That made her work even harder to be fit and outdo the bullies where it hurt them most – in outdoor sports. Although her teachers appreciated her intelligence, it was a fact that they almost always allowed her to be the brunt of class jokes and treated her more harshly than the other kids, in front of whom they would be, surprisingly, quite speechless. She’d been assigned a seat in the last few rows even though she was the most attentive kid and was always willing to learn new things. She was often asked to help other kids with their Arithmetic and Algebra; yet nobody ever helped her with her English. She’d been rapped on the knuckles with a ruler for talking in class – even if it was to answer another kid’s queries, or for the slightest mistake in English spelling. But for similar mistakes, the class-teacher had spared other such kids whose surnames clearly defined their higher social status by merely waving the ruler in the air. Invariably, the other kids were preferred for the school team, whether it was for the inter-school elocution contest or the selection for the sub-district Republic Day marching contingent.

One afternoon, when she was about twelve, and had dared to sit for an English class in one of the middle-rows, a girl who had developed a habit of bullying her by tugging at her long hair, pulling out and hiding her hair-clips, snipped off a long part of her pigtail with scissors she’d smuggled in from home. She was abetted in this beastly escapade by another girl who often teased her about her dark complexion and skeletal frame. She had been in love with her long, black and shiny hair. Commencing with her high-pitched scream, which had elicited an equally frenzied shriek of laughter that was echoed from different corners of the room, she had continued to weep for a long time at the calamitous loss.

At that age, loss of long hair was as tragic as death. She complained emphatically to the class teacher, but, to add insult to injury, instead of sympathising with her and taking the culprits to task, the teacher had sniggered at what had happened. When Deepika had protested, the teacher slapped her for deliberately not tying up her long hair – insinuating an unkind intention to provoke jealousy amongst girl classmates. Later she’d learnt that both the kids were relatives of Mrs Shukla, the teacher. She had stormed home, screamed and cried before her grandparents. They had accompanied her to school, but the teacher had refused to meet them even as they kept waiting in the corridor for almost the full day. She remained dejected for a long time. Initially she complained of recurring nausea and stomach ache as an excuse to give the school a miss. Later, she wanted to drop out of that school altogether and go to a different one. But her grandparents had little heft in the matter considering the difficulty in getting admission into that school. Her father insisted that she continue and behave as if nothing had happened.

Before every major Board examination – in the eighth, the tenth and the twelfth class – she invariably found some critical notebook or textbook missing from her schoolbag. It would force her to recreate from scratch, by begging others to lend their books for a day when she’d keep awake through the night, working to make up for the loss. Her doddering grandparents would be by her side, watching her helplessly – sympathy their solace, hope their promise.

Many times, she’d rest her head on her grandmother’s lap and fall asleep – listening to stories of love and happiness about princesses, birds, animals and wizards.

The worst cut was when people insisted on knowing her caste. The clever ones knew Thakur was only a shield, a camouflage. They persisted until she was forced to reveal Chamar. And then they would sneer that they had guessed that in the first place or smirk to suggest that a person’s background couldn’t remain hidden for long. Some would taunt the academic or career prospects of a Chamar and the pointlessness of their education. The more altruistic ones would think they had done their social responsibility deed of the day just to have spoken nicely to her: ‘Despite the fact that she’s a Chamar, I wasn’t rude. I spoke to her with gentle tameez.’

Such incidents, repeated in quick succession and continued over a length of time, at times made her feel defective by birth. Sometimes she cursed her luck and at other times, she wept before her grandparents. Other than offering compassion they admitted that they were powerless and had no idea what they should do. One day, she too had hidden a pair of scissors in her school bag to eke out her revenge. But her grandmother discovered them. She calmed her anger but pulled her ears. When her father had learnt about it and had rushed to talk to her. With a wealth of ingrained knowledge culled from years of belittling experience he cautioned her: ‘Deepu, we can’t afford to make mistakes or annoy anybody, if we’re to rise beyond our current status. Be observant, be calm, be patient.’

Yet another time, anguished by the continuous struggle to be given a just treatment, she burst out crying and banged her fists against her father. ‘How am I different from the other kids? What have I done wrong? Why should everybody be after me?’ He wiped her tears, pulled her hair back and kissed her forehead. Then he consoled her. ‘Nobody can put us down,’ he said. ‘We have God’s protection. Even Gandhiji said that we’re Harijans … God’s Own People.’

‘God’s own woman,’ he said with tears in his eyes. He held her cheeks in his palms and gazed into her eyes with a feeble smile.

She had jumped with relief and kissed her father. It was her turn to wipe his tears with her hands.

And thus, after several such protests were quelled, persuaded and goaded by her tired parents, she just made up her mind to suffer insults silently and embraced them as the eternal mosaic of her life. Bitter memories were compressed and entombed in the deep recesses of her mind, each time embalmed with the fiction that they were strange, one-off incidents, and with the prayer they would naturally disintegrate, dissolve and disappear into the infinite depths of time. 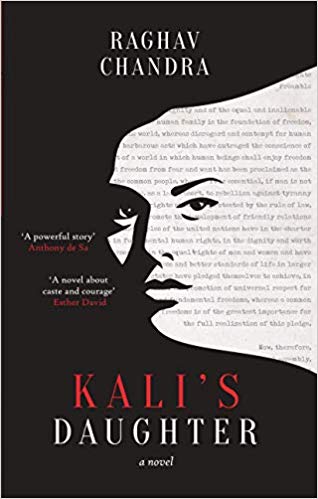 Raghav Chandra, an IAS officer has held a number of important positions in the Government of India. He has a special interest in the development of Indian tribes. Raghav holds master’s degrees from Harvard University, where he was an Edward S. Mason Fellow, and St Stephen’s College, University of Delhi. He writes and lectures about inclusive growth, management and sustainability, and has been widely published. He is  also the Director of the Bhopal Literature and Art Festival.

Excerpted with permission from Kali’s Daughter, Pan Macmillan India, available online and at your nearest bookstore.