In March 1971, as a Pakistani army convoy attacked the grounds of the Dhaka University, the heart of the burgeoning Bangladeshi independence movement, they were faced with an inexplicable situation: they found that all their weapons, rocket launchers, and tanks failed to remove a particular banyan tree. The tree was a rallying point for students who demanded independence from West Pakistan.

In this excerpt from the critically acclaimed novel ‘Babu Bangladesh’, by Numair Atif Choudhury, now nominated for the Shakti Bhatt First Book Prize, we meet with the desperate Pakistani army soldiers on their fourth day of struggles against the banyan tree. Numair, who passed away on this day in 2018, has been called the Bangladeshi Bolano by novelist Amitava Kumar. His debut novel, published posthumously, straddles a thin line between magical realism and fictional biography, in which an unnamed narrator recounts the life of one of Bangladesh’s most well-known heroes.

On day four, as Lieutenant William Calley was found guilty in Fort Benning, Georgia, of twenty-two murders out of the hundreds of civilians killed in My Lai, Vietnam, and sentenced to life imprisonment (only to be later pardoned), as Chilean President Salvador Allende nationalized banks and copper mines, and as the MMR hepatitis vaccine for infants was announced, Major Saud was awoken by a radio operator. A furious General Farman was demanding an update on the status of Mission Root Removal. The major was still very much under the influence of psychoactive substances during the conversation:

Control: 84, hello. What is going on over there? Major are you asleep at 1027? I have been hearing the oddest things about your camp. Listen, Major, we’re here to secure a whole bleeding country, why is that you’re still stuck with Root Removal? And I hear you’ve destroyed about half the university. We’re supposed to restart classes ASAP. Do I have to fight this whole damn war by myself? Over.

Major Saud: 84 for 89. Good morning, ahh, good morning. Sir. Do not think I have not tried. Sir, I have tried everything … This tree, I swear every morning it gets bigger … Last night I saw it with my own eyes, it was growing more branches while we were cutting others … My Cheetahs saw it too. But I will get it, bastard strangling fig. I will send its corpse to India. Over.

Control: Major Saud … you sound … are you drunk, you fool? We’re facing pot-shots from these bloody Bengalis and you’re doing what … drinking? Even without Big Bird, they’re still fighting back. Listen, this is it, I am personally coming over tonight, I have a feeling a good thrashing might help your elements. Over.

Major Saud: 84 for 89. Please, sir, can you bring some more electric arm lamps, sir, the powerful ones. Night here is very bad, sir, things are moving always. Over.

Control: I have nothing more to say to you, you filthy madman. Out.

This brief exchange is the closest thing I have found to an official admission of what was happening with the bot. Even if all the evidence and testimonies I have acquired are to be dismissed, this short clip validates the telling of this tale.

After the dialogue with General Farman, a rather befuddled major returned to his operations at DU. He was having disturbing flashes from the previous night and began to remember his wrathful antics. He looked over his men and realized they looked rundown. A transistor somewhere was tuned into Voice of America, and he could hear a presenter debating the Los Angeles jury recommendation that Charles Manson and three female followers be given the death sentence. Acting on orders, another operator was tuned into All India Radio’s broadcasts from Calcutta, where the day’s coverage focused on the 114th anniversary of the Sepoy Mutiny of 29 March 1857, when a Bengali named Mangal Pandey had rebelled against his British commanders. When Sepoy Pandey of the 34th Regiment was court-martialled and hung, he inspired India’s first War of Independence. The major’s superiors could have gained much from heeding events such as these from Bengal’s history before the launch of a 1971 onslaught. But it was too late now and, for the moment, there were commissions to requite.

Major Saud learned that the munitions engineer had arrived at 0800 hours and had procured the incendiaries as promised. The major was visibly relieved as he looked over the goods and the fresh cordite. He immediately had the engineer prepare a charge for the bot. Now, there are differing accounts of what transpired on day four, and our investigations will attempt to cover most of them.

Those privy to what was going on with the bot report that several attempts to demolish the tree failed that afternoon. The keen ballistics technologist circled it with gunpowder, only to knock away bits of bark and a few branches. He then painstakingly inserted charges in between limbs and on stems at strategic points, before once again igniting to no avail. Those familiar with the effects of dynamite on trees will attest that it is no simple matter to fell a large growth. There is one sure way to take out sturdy trunks like those of the banyan, but neither Major Saud nor his men knew it. One of the TT participants who contributed to this narrative claimed that the PSs had managed to turn the engineer and had persuaded him to spare the bot. Another account had it that the plebe had lunched at the DU base and was thereby rendered incompetent by narcotic agents. Irrespective of the exact details, the major badgered an increasingly ineffective and reticent demolitions novice into the late hours of the afternoon when Major General Farman arrived with his men.

A string of vehicles raised a cloud of dust as they rolled in and, on disembarking from his vehicle, the infamous Major General continued to raise hell. Farman was regarded by privates on the ground as more callous than President Yahya Khan. His meticulous and thorough blueprint for Operation Searchlight surprised even the bloodthirsty General Tikka Khan, who was not immodestly nicknamed the Butcher of Bengal. Farman immediately dismissed the major. He filed a report alleging that he found Major Saud weeping in public, with a pistol in his hand. Furthermore, the major’s Cheetahs lacked morale, exhibited signs of fatigue and did not look fit enough to tackle neighbourhood ravens, let alone a potential counter-insurgence.

Farman had three other officers – two colonels and a lieutenant colonel – removed from active duty and airlifted back to Karachi with the major. Having been in the war business for decades, Farman correctly suspected that many of the men were experiencing narcoinduced side-effects. He had all food rations destroyed, dishes and uniforms soaked in boiling water, and the encampment sterilized, disinfected and treated for contamination. This was done in a matter of hours and, through it all, Farman’s eye was fixed on the obstinate bot.

Around 2000 hours, two men from his ammunitions corps befittingly suggested that deep holes be drilled into the main trunks to create mortises which could be filled with dynamite (this was the trick that the major had missed). They explained that if the holes were sealed with clay and allowed to harden for hours, the effects of the charge would be greatly magnified. Farman’s men asserted that a brisance of this nature would fracture the tree from within; it would be an easy matter to knock the bot down afterwards. Farman liked the idea and cleared them to proceed.

The men worked until close to 0000 hours, and left the clay to dry. Farman returned to the cantonment garrison and was met by intelligence, surveillance and reconnaissance agents. Reports were filtering in that Bengalis all over the nation were fleeing towards India to drill at border camps. This was not remarkable, but what was particularly unexpected was that word had somehow made it to several high-ranking Pakistani officers, as well as to the Bengali militia, that the bot at Dhaka University was somehow trumping the potential of Pakistani regiments. There was even talk about a bot Bahini (‘bahini’ meaning ‘army’ in Bengali) and its fight to save the perennial.

Farman vented these frustrations to a certain Dutch-Australian, William Ouderland. The foreigner had dropped in to chat and share anecdotes about local events. Ouderland, new to the region, had been posted as director of a shoe factory shortly before the war broke out. Having been a sergeant in World War II, the Dutchman quickly befriended Farman, Tikka and General A.A.K. Niazi, commander of the Eastern Military High Command. Ouderland was issued a security pass, allowing free access to the headquarters of Eastern Command. But what his new friends did not know was that Ouderland (who had formerly worked with the Dutch Underground Resistance Movement) had joined the Bengali uprising on commencement of Operation Searchlight. On infiltrating Dhaka cantonment, Ouderland not only provided vital information to the growing insurgency, but also personally organized and directed a number of guerrilla operations. Unrecognized and unexpected heroes such as he toiled to ensure that the Bengali victories continued rolling in.

General Tikka arrived at the cantonment a little later, and on being apprised of the tree situation, volunteered to take over campus operations. Farman assented. As Tikka received notice that a snake infestation had overwhelmed their men at the university, he scheduled his visit for the next morning. The two Bs had indeed returned with several bedeys carrying sacks of poisonous snakes. With the help of Mr Majumdar and a few others, these serpents were released into the barracks at the heart of DU. The area would have to be cleared of underbrush and gear, and rations would need to be meticulously inspected before being pronounced safe. Thus ended day four. 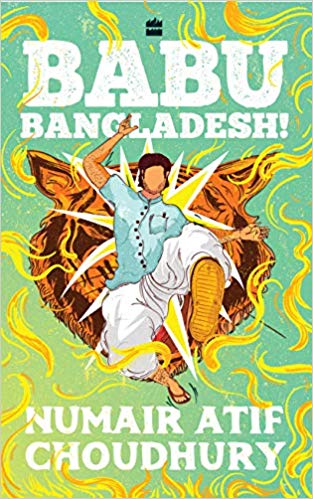 After studying creative writing at Oberlin College and the University of East Anglia, Dr Numair Atif Choudhury did a PhD from the University of Texas, Dallas. He had been working on Babu Bangladesh!, his epic first novel, for nearly fifteen years. Soon after completing the final draft, he passed away in an accident in September 2018.

Excerpted with permission from Babu Bangladesh!, Fourth Estate India, available online and at your nearest bookstore.