Analog/Virtual And Other Simulations Of Your Future

The room is dark. I know you’re listening – someone’s always listening. I’m saying this out loud so you can hear me.

The room is dark. It’s Sasha here, by the way. Just clarifying.

It’s dark, and I’d really like a light. I’ve never experienced darkness. I know this is part of my punishment, but it’s really dark.

Listen, I’m not panicking. I’m perfectly calm, see. You can tell from the tone of my voice.

I’m going to stay perfectly calm because that’s what you want. I know this. If I stay calm and behave myself, you’ll reward me. That’s how the system works.

I know I’m being deported, but there’s still the system right? I’m a part of it, even though you’re sending me…there.

I’m going to behave myself. Did you get that?

I have faith in you. The system always rewards good behaviour.

It’s still dark. I know I’ve been in here for forty-eight hours. I read the fine print when I was taken. I get my nutro-shakes once a day. I’ve received two nutro-shakes. That’s two days.

I know you expect me to lose track of time in here. Well, I’m not going to. You’ll see how smart I am. That this is all a big mistake.

This is Sasha, by the way. I’d like some light.

I haven’t burst into tears or screamed or hammered on the doors, like some of the others in here. I know that’s bad behaviour. And the system always rewards good behaviour.

It’s day three, and I still don’t have any light, but I’m being patient.

Also, you know, keeping track of time. I know you expect me to lose my mind, but I’m telling you, I’m better than all the others who have gone before me.

You’ll realize that you’ve made a mistake. You’ll probably let me back in. I make an excellent seventy percenter, just look at my track record. I only slipped in the last quarter, but that’s because I had –

Look, I know I let you down. I was unwell. I was sent to the counsellor. I fixed myself, right?

I didn’t hit my targets but I fixed myself. And now I can hit my targets. Just let me back in and give me another chance to prove myself.

This is Sasha, by the way. I know you’re listening.

I keep waking up and reaching for an OmniPort that isn’t there. It feels like an itch in my brain.

I’ve accepted that I don’t deserve my HoloTech, though. I surrendered my holo-watch and my OmniPort without protest. You should have seen the man beside me. He screamed when they made him give up his intel-glasses. He was so loud and angry that they had to put him under. Then they carried him to another room on a stretcher – I suppose to deactivate his chip, maybe to get the rest of his tech off him.

I didn’t scream. I barely cried during the electro-surge that fried my chip. The scar tissue still itches, but I haven’t made a big deal of it.

You can ask the ward-bot that comes in with my nutro-shakes. I speak only when I’m spoken to during my daily medical exam. I make no unreasonable requests, even though my brain feels like it’s on fire without my OmniPort. My fingers twitch all the time, but I can still focus. I get all its questions right.

Thank you. Thank you, Bell Corp. I knew my patience wouldn’t go unappreciated.

The ward-bot just gave me a candle and a box of matches. I don’t know how to use them, but I’m going to learn.

Was that an accident? Did you send me wax-tipped matches by accident?

It’s Sasha here. I’ve been in the dark for a week now. I tried to light every single match but none of them work. I removed each one I struck from the box and laid them in a neat pile on the floor, but they shifted somehow – or maybe I lost track of them in the dark. It was hard gathering them off the floor without a light, and there was a lot of crawling involved. I found them all, though – they’re back in the box and you can count every single one.

So could you send me another box of matches, please?

‘Summer Sunshine’ by Edie Taylor has been stuck in my head, but I don’t know all the words. Could you please send them with the ward-bot tomorrow? It’s playing on loop.

I’ve been trying to sing along to songs I know, but I realize that I never bothered to learn the lyrics because they were always on the Nebula, and I was always uplinked to it. It’s amazing how silent the inside of my head is without live-streamed ambient sound from my InEars.

I’m not asking for my OmniPort back, though. Or for my InEars. I don’t deserve them. I’d just like the lyrics to one song. And another box of matches. Please?

This is Sasha. Just in case you’re listening.

I get that the Analogs don’t have free electricity or running water. I get that you’re trying to acclimatize me to a life in the dark. But this feels like punishment, not sensitization. It’s taken me two weeks to come to this conclusion.

I thought Bell Corp was humane. Th is does not feel humane.

I’m sorry, I didn’t mean to yell at you. I only meant what I said as constructive feedback.

How many days has it been?

Bell Corp does such a great job designing these simulations. I wonder how I’m doing on this test.

Name: Sasha. Age: Twenty-eight. Address: Where are we right now?

You’re letting me leave! You’re blindfolding me because it’s a big surprise, aren’t you?

When I open my eyes, I’ll be back…somewhere outside the dark. It must be my birthday. Is it my birthday?

Where are you taking me? I hope there’s cake. 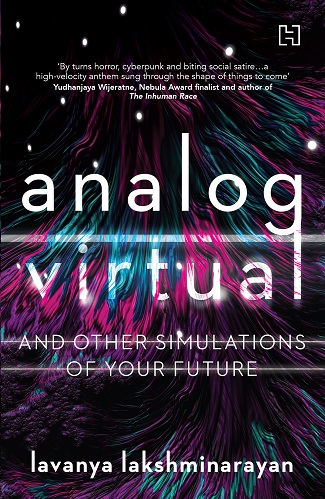 Lavanya Lakshminarayan is a speculative fiction writer and game designer from Bangalore, India. She has received an honourable mention from the A.C. Bose Grant for South Asian Speculative Literature 2019, awarded by the Speculative Literature Foundation, U.S.A. She is one of the winners of the Nature of Cities Prize for Urban Flash Fiction 2018, and was shortlisted for the Toto Award for Writing in English 2019. Her fiction has appeared in numerous anthologies and publications, including A Flash Of Silver-Green, Third Eye and The Indian Quarterly.

Excerpted with permission from Analog/Virtual And Other Simulations Of Your Future, Lavanya Lakshminarayan, Hachette India, available online and at your nearest bookstore.