What makes a good book great? What sets it apart from the plethora of books we come across every day? How do we know which books will meet our expectations, or worse, put us off of reading altogether? Reading through a literary award list is certainly one way to go, where you get to read books that have been curated by a special jury. But what makes the books shortlisted for literary awards exceptional? To answer this question, I set out to read all the books that were part of the shortlist for the JCB Prize for Literature 2019.

During the #jcbreadingchallenge, I read books from authors all over India, whose heart-wrenching stories had me falling for them hook, line and sinker. The shortlisted books included Manoranjan Byapari’s There’s Gunpowder In The Air, Perumal Murugan’s twin sequels Trial By Silence and A Lonely Harvest, Madhuri Vijay’s The Far Field, Roshan Ali’s Ib’s Endless Search For Satisfaction, and Hansda Sowvendra Shekhar’s My Father’s Garden.

There’s Gunpowder In The Air had my heart from the moment I started reading it, but once I was done with The Far Field, my loyalties shifted and I wholeheartedly wished for it to win. And, voila! It did. Some were disappointed with the result, and others wished for a different book to have won, but I was firm in my decision. Not only did Vijay give us a deeply introspective story, but she also managed to encapsulate the common life that is entangled with the political unrest in Kashmir as the backdrop of her protagonist’s mystery. 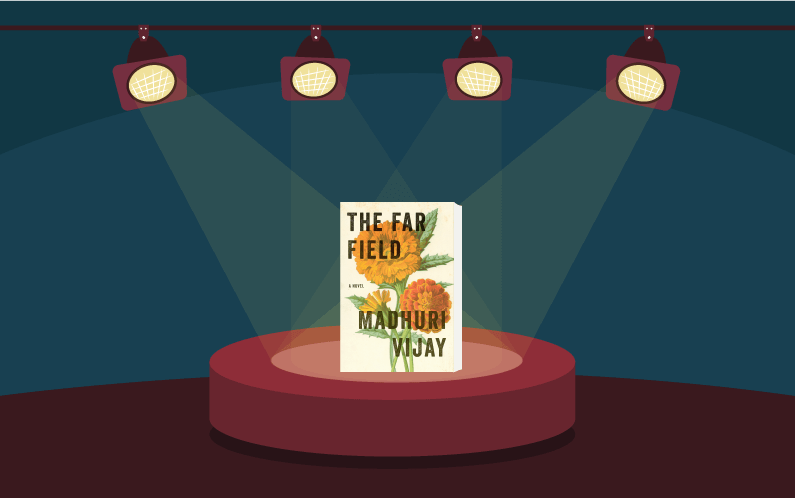 The Far Field follows Shalini’s journey from Bangalore to Kashmir after the death of her mother. While mourning, Shalini remembers the only person who could make her headstrong and enigmatic mother laugh – a Kashmiri salesman named Basheer Ahmed. Shalini has no idea why she sets out on her journey or what she hopes to achieve by meeting Ahmed. Like many youngsters, Shalini goes through school and college without thinking of what she plans to do in life. Vijay paints a truthful picture of a spoilt woman whose parents save her from a scandal and even help her find a job. I see so much of myself in Shalini, who finds it difficult to determine where her future is leading her, and one who often lies to her parents.

As both readers and audiences, we are used to a happily-ever-after story, one where all is right in the world and injustice does not prevail. As we grow up, we understand that life is more complicated and difficult than that, so we seek solace in books that have happy endings. Some books, like There’s Gunpowder In The Air and Ib’s Endless Search For Satisfaction, show us a reality that is bleak, one that fills us with despair for all those who suffer, with the knowledge that sometimes life is like that – dull, listless and tragic. But Vijay weaves tragedy into mystery, into philosophy, into the occurrences of daily life, thereby making the reading process extremely pleasant.

Shalini journeys to Kashmir, where she finds herself growing attached to Abdul Latief and Zoya, a couple who hosts her, and whom she gradually begins to love and respect. With them, Shalini discovers the normalcy of a home that was previously missing in her life.

Having heard the news of the atrocities and riots in Kashmir, she, like most of us, assumes it to be a war-torn battlefield. Instead, what she finds is normal people leading an ordinary life – one that could easily be upturned at the merest flicker of violence. The Kashmir she sees is a land of unbridled beauty, with mountains that stretch on forever, and people whose simplicity and hospitality overshadow the natural beauty that surrounds them.

In the book, Shalini discovers that even though there are children disappearing off the streets, the army refuses to provide the waiting parents with any answers. This is her first taste of reality in Kashmir, and she yearns to help. And yet, when she finally manages to track down Ahmed, she chooses to prioritise her own needs above others. Selfish, oblivious Shalini leaves the people who shower her with love and respect, and sets out for the man who she thinks will help her find answers and bring her peace.

The mark of a good story lies in its ability to keep us hooked, and The Far Field does exactly that. We learn how Shalini’s mother shaped her life, and why it was so crucial for her to meet Ahmed. As readers, we get to experience Shalini’s dilemma over loving and hating her mother at the same time, a dichotomous emotion many of us find familiar.

Another aspect that makes for a good story is the novel’s ability to maintain a fine balance between plot and introspection. Unlike Shekhar’s My Father’s Garden which is a fast-paced story or Ali’s Ib’s Endless Search For Satisfaction where the protagonist is often lost in philosophical thoughts, Vijay’s novel strives to incorporate both these elements in her story, and readily succeeds.

That is not all, as Shalini has yet to learn the importance of friendship, the misery of love lost and gained, and the price of betrayal in her journey. Even after being showered with so much love and respect, Shalini still manages to ruin lives with her actions, and worst of all, continues living her privileged life afterwards. This spoilt girl remains a coward through every major event in her life. As ominous as it may sound, The Far Field still manages to bring out the story of the best and the worst of humanity, and how sometimes ignorance really is bliss. 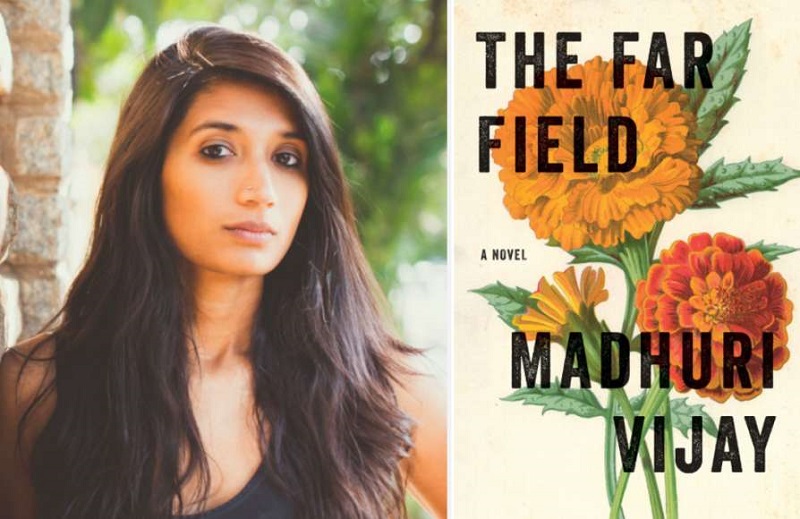 A facet of The Far Field that I found immensely enjoyable was the multitude of characters, and how they weren’t your run-of-the-mill, one-dimensional props who get lost in the shadow of the protagonist. There’s Shalini’s mother, the wilful and casually insulting woman, who doesn’t give two hoots about societal expectations, something that fascinates Shalini. Her mother’s “little beast”, Shalini, is a silent witness to the unusual relationship between her mother and Ahmed. An enigma until after her death, Shalini’s mother remains one of the most fascinating characters in this book, in sharp contrast to Shalini’s father, a man solely driven by success and money.

Another such character is Zoya, who hosts Shalini in Kashmir for a while. Zoya initially comes across as unwelcoming and stern towards Shalini and remains wary of her. We later come to know that it is Zoya’s way of protecting herself from getting hurt. She prefers keeping people at bay so that she doesn’t grow close to them and lose them as she did her son. A quiet woman, Zoya is unyieldingly fierce and protective of the people she loves, and even works at a non-profit to help those whose family members have gone missing.

Riyaz and Amina, Ahmed’s son and daughter-in-law, are other characters whose lives change with Shalini’s arrival, as they get entangled in a stormy love triangle. Even when their lives centre around hard work, with the threat of violence always lurking and the burden of their economic condition, Riyaz and Amina are very hospitable towards Shalini. They incorporate Shalini in their lives and give her a place in their little piece of heaven.

Shalini’s life is moulded by contrasting characters all through her life, and the story is all the more better for it. There is Shalini’s mother, a complex individual, and there are Amina and Zoya, so loving and approachable, a clear contrast to Shalini’s family. These characters bring forth different nuances of human characteristics, and each contribute in their own way to the story. Unlike the characters Kali and Ponna from Trial By Silence and A Lonely Harvest who are constantly prattling about their childlessness all through the novels, Vijay’s characters play roles that are more than just being a support system for the protagonist. 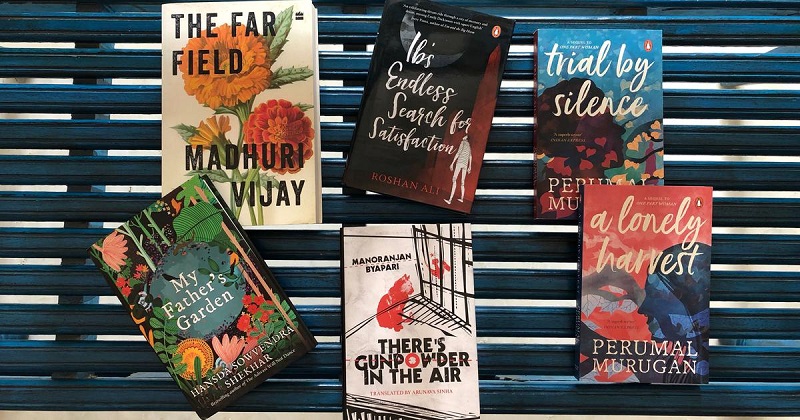 The thing that sets apart a good novel from a great one is its author’s writing style. In Trial By Silence and A Lonely Harvest, Murugan’s writing meanders into long-winded descriptions of food and cultural traditions which doesn’t necessarily add anything to the story whereas in There’s Gunpowder In The Air, Byapari takes the help of dialogues and fast-paced action to give us a thrilling story. All these techniques definitely make for a good novel. The Far Field, however, is written without using pretentious imagery or long descriptions of destinations. Vijay does not toy with unpronounceable or heavy words, yet weaves a story so convincingly vivid that it’s impossible to not imagine ourselves milking the cow beside Shalini in Kishtwar or looking at Riyaaz in a totally new light. Using simple yet effective language, Vijay captures the complexities of families, factions of love, be it between lovers, parents or even friends, and the violence and rift between communities that is constantly bubbling under the surface in Kashmir.

It could have been very easy for Vijay to blow the Kashmir conflict out of proportion by using searing incidents. Instead, she chooses to finely balance the heavy topics of insurgency, depression, suicide and love in an outstanding manner. 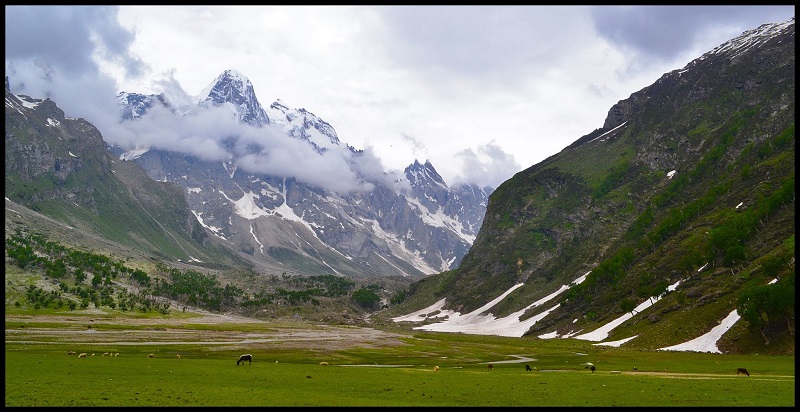 Madhuri Vijay’s The Far Field was selected as the winner unanimously by the jury, who said, “This deeply introspective story, located in troubled Kashmir, is also a panoramic exploration of our ideas and assumptions about nationhood. Rendered in visually evocative, lucid prose, and driven by a fragile but compelling narrator-protagonist, this tragic novel teems with unforgettable characters.”

Personally, the fact that Vijay’s novel did not have a predictable ending, or an unlikeable protagonist was only second to the fact that it ticked off so many boxes that I had not discovered. It gave me an unlikely friendship between an eccentric woman and an obliging salesman, a young man’s life riddled with violence and his need to escape, the quiet and resilient Zoya, and a child who constantly wonders if it would have been better to have loved her mother a little less. And yet, more than the character of Shalini, I love The Far Field because it gave me a Kashmir I had never seen before.