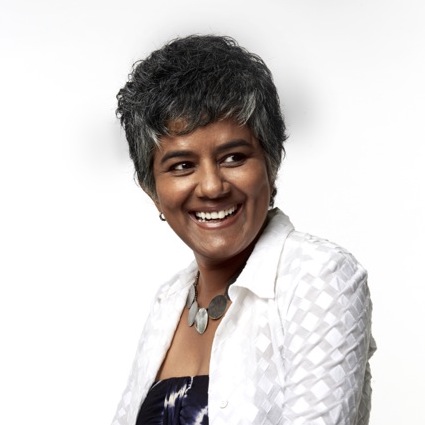 I don’t remember exactly when my love for second-hand books began, but I remember scouring the footpaths of King’s Circle, where my aunt lived, to make my birthday money stretch far by seeing just how many Agatha Christies I could buy for Rs. 100 (or whatever was the bounty for that particular year). Sometimes, I came back with at least five or six; they would last me the whole of my summer vacation. Later, I also discovered the New & Secondhand Bookshop at Kalbadevi, a place I spent many rainy afternoons at. Sadly, the store no longer exists although I still have a few of their books and bookmarks.

For many like me, there is a joy that comes from browsing the remnants of other people’s collections – and often accidentally discovering the kinds of writing you had not known existed. That is, after all, what second-hand bookshops were created for, I think. 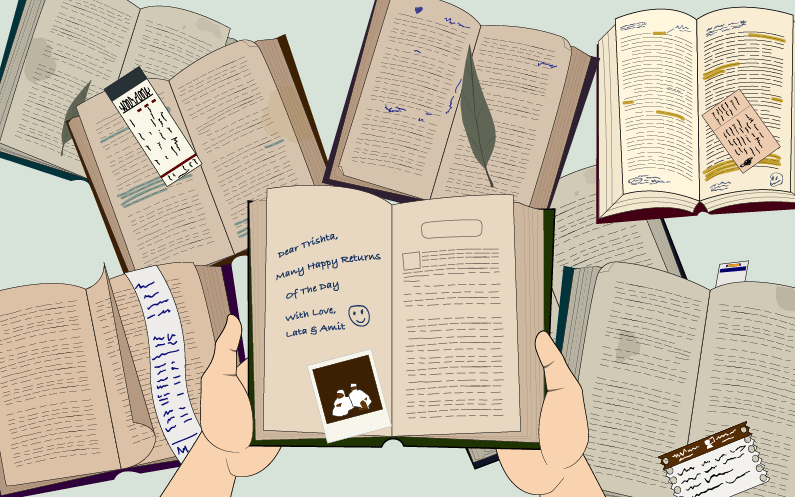 It’s not just me. There is a whole bunch of second-hand bookers in the world, adopting old books and giving them new love on their shelves. Malavika Goyal, a feminist researcher and Dance Movement therapy practitioner, used to go regularly for the Delhi Book Fair in college and recalls that she could hardly afford anything. “Once, I came across the Penguin hardbound classics and I fell in love with Alice In Wonderland with its beautiful, original illustrations, but the book was for around Rs 2,000. I couldn’t afford it, so I just moved on. A few days later, I found a hardbound, The Complete Illustrated Works Of Lewis Carroll, lying right at the bottom, quiet and inconspicuous at a second-hand book stall. I got it for 200 bucks. It had nice yellowed pages and was just wow!”

My own hard bound copy of Alice In Wonderland (my mother had given away my childhood copy when I moved out) came from Literati Bookshop in Goa – a charming space for all things old and wonderful, in an old villa in Goa.

It is here that I also picked up my son Re’s first cookbook – My Learn To Cook Book, originally gifted to a Sherry in 1973 by Aunty Banso, Uncle Keki and (perhaps their children) Ketayun and Minso, going by the inscription inside. Also written alongside, in a different handwriting, was “Sherry’s first cooking book”. May be this was done by Sherry or her parent, I can’t tell.  What I can is that they did have a lot of fun cooking from this book as did Re and I;  we made cheesy baked potatoes, zoo biscuits, fruit crumble, fruit tartlets, and fairy cakes from the recipes inside. 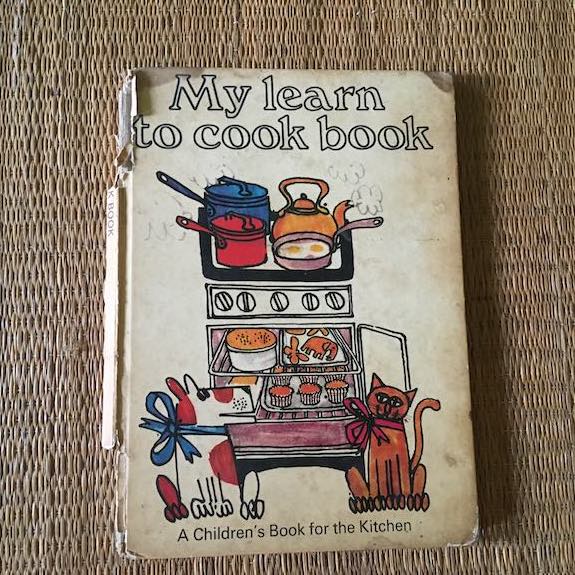 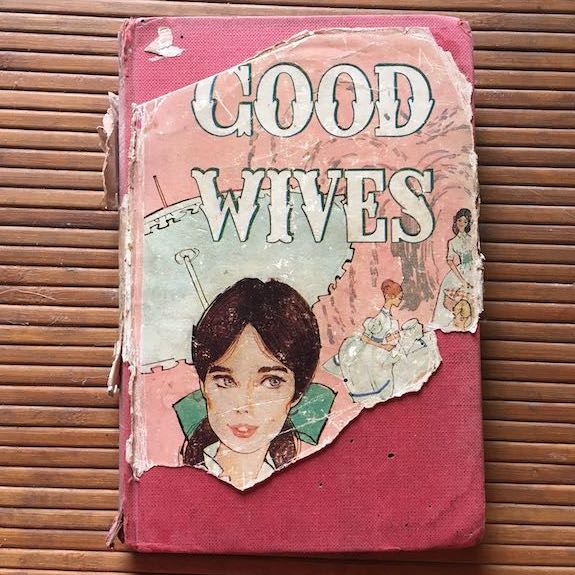 When you own a book that you really like, a part of you stays in it long after the book has left your shelf and traveled to someone else’s – handed down, stolen, lost or sold. Very often, when people don’t have a book mark handy – they use various things: bus or train tickets, newspaper cuttings, leaves, pocket combs, movie tickets, twigs, hair pins – I have even found a grocery list once and a scribbled note. People forget these pieces of themselves in the books they set free and so they lie there, cocooned, waiting to be discovered by the new owner. I have had several such encounters.

Like how I found a copy of the hard-to-come-by Good Wives. My copy was awarded as a prize in the year 1964 to Dinoo Gandhi at Kimmins High School in Panchgani and later, handed down to (or bought by) Firuzi Dabri at Sunil Book House at Grant Road and then bought by me at a second-hand book shop in Malad. But that is not the most beautiful part of this story. Somewhere between 1964 and 2019, the pages between 28 and 33 had gone missing from the book (most likely due to the weak gummed binding, as they clearly don’t seem ripped off) and someone actually took the trouble to typewrite pages 29-32 and insert them into the book. And those pages actually made it to me!

Or this battered copy of Heidi I bought at a raddi shop for Rs 10 ( from the liberal stamping all over the book I figured it was originally inhabiting the library of G C Shah Sarvajanik English High school). It had a slender handmade bookmark with the words: “Learn well your English prose and success will touch your toes” from a Khushboo.

Intriguing also was the story of a Vineet Pruthi who affixed his address stamp (and sticker, to be doubly sure) on the inside back cover of Little Cabbages by George Mikes, a charming little travelogue on France I once bought at the Prithvi Book store for Rs 50, on Jerry Pinto’s recommendation. The address had a Bombay 71, AS and I’m still trying to fathom what AS stood for, long after I read the book. Vineet had also signed his name on the inside title page and put down a six digit number which I am almost certain was his phone number.

I recently stumbled onto a lovely hard-bound copy of Little Women at my local second-hand bookshop and when I opened the book, I realised it was actually gifted in 1988 to a little woman on her 14th birthday by someone called Sanum. I wondered if she was an aunt, a friend, or a classmate. I wondered if Reshma (who the book was gifted to) actually turned out to be the woman that Sanum might have wanted her to be.

I also sometimes think about Trishta, who was gifted Three Little Pigs by Lata and Amit on her birthday in 1997 and which I bought at the Welfare of Stray Dogs garage sale, a few years ago, for my son. I’m guessing Lata and Amit were friends of her parents, and perhaps the earliest people to gift her books. Were they fun? Did they read to her? Did she like their version? Did she make up her own? What is she doing now, I wonder. 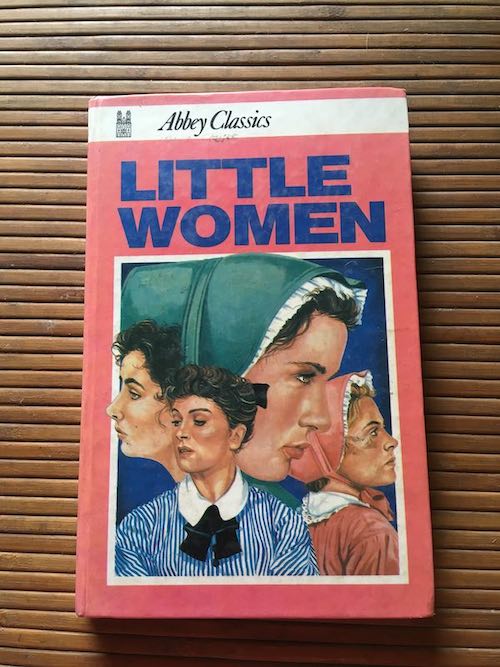 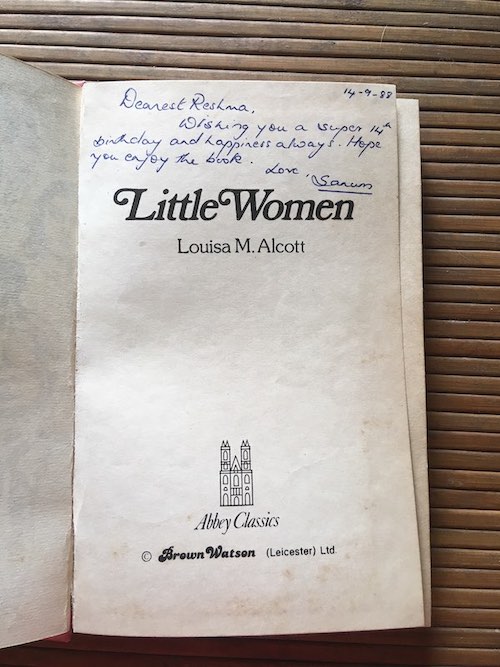 We all have our stories of “second-hand book finds”, although with the shutting down of iconic stores like the New & Secondhand Bookshop in Kalbadevi, and the severe clamping of footpath vendors, there aren’t many go-to places. In recent years, there has been a rising phenomenon of Books by Weight in most cities and I have been to a few of these exhibitions myself and found good bargains – like a copy of The Best Of James Herriot: Favorite Memories Of A Country Vet for Rs 500. But, on the whole, the experience was sterile and aseptic – the books were commodities to be sold, there were no secret bookmarks or inscriptions to unearth, and the stock probably came from publishers or libraries who were dumping excess books. Serendipity was still at play – I did find a copy of Murakami’s The Strange Library alongside Chetan Bhagat’s The Girl In Room 105. It’s funny how sometimes you find a book, and sometimes a book finds you.

Yashasvi Vachhani, a Mumbai-based writer and curator of children’s content is also a second-hand book lover who has been shopping at book sales or on the streets of Flora Fountain. “This one time I picked up a copy of Embers by Sandor Marai which had notes and thoughts scribbled in green ink on the margin. The whole experience of reading the book was like having a conversation with the previous reader, agreeing with a few points, adding my own thoughts. I wondered about this person who felt like a kindred spirit. It was a great experience, one I still remember fondly.”

Bangalore-based illustrator Vidya Gopal often finds herself breezing through second-hand books at Blossoms. “Not just for those books themselves, but for the notes in the margins, tickets hidden in the pages…” She has bought many old art books, classics, a ‘fart encyclopedia’… “A couple of years ago, I picked up a book called Kasi Diaries by one ND Varadachariar – (1903-1945). His children have edited and published his diaries (from the age of 13 till he died at 42) and the book seems to have been gifted to someone by the writers themselves. His commentary is terse, sharp, laced with humour and sarcasm; it’s not a book I read end to end, but I often open random pages and feel quiet transported,” she says. 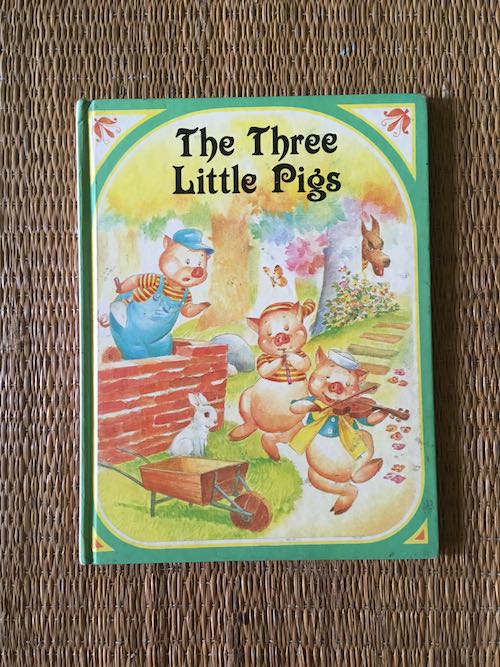 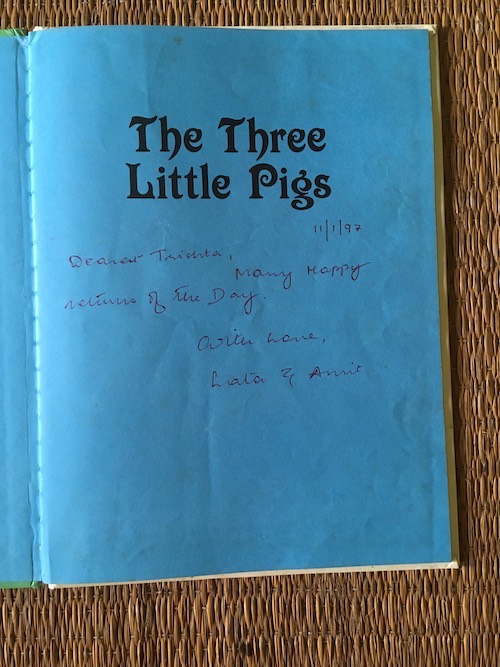 But the most precious second-hand book experience for me was receiving a copy of an English-German-French illustrated dictionary that my late father-in-law had lovingly saved since 1980, when it was first gifted to his son and then came to mine, 38 years later. “I feel like a part of history, Mamma!” Re said, when he read the inscription inside from his grandfather to his father.

He is. We all are when we hold a second-hand book in our hands.