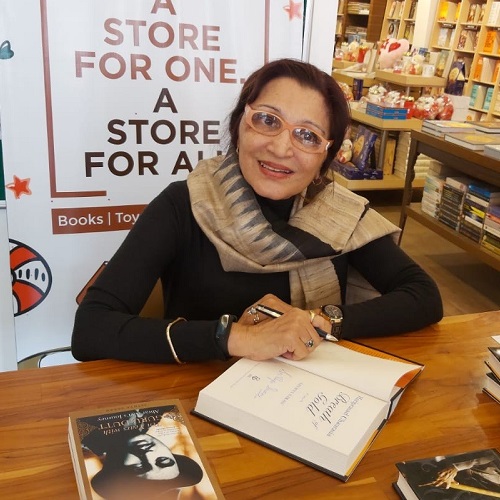 Music reaches out to the soul. It moves the divine in man and beast, often making them forget themselves, transporting them to another plane. It transcends language as the alchemy of seven notes creates powerful magic. A magic that exists not just in a harmonic orchestrated composition or a deeply evolved delineation of a raag, but even in a simple note played by the roadside flute-seller on his flute, a mud violin-seller or the Baul singer on his ek-tara.

How does one capture music in words? I mulled over this dilemma for days.

Today, many great musicians and artists who have created path-breaking work in music and other arts remain unknown beyond their stage performances. Yet, each of them has a story to tell that would definitely inspire the aspiring among younger generations to strive for a level close to perfection in their chosen art. 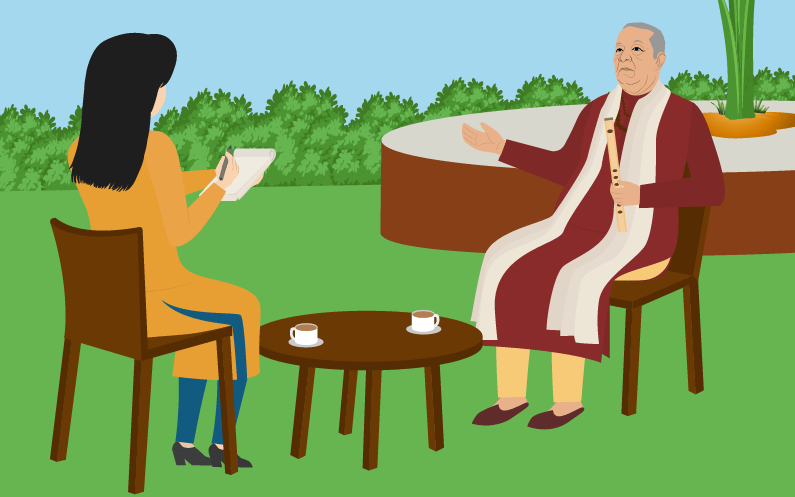 This thought struck me one Sunday evening while I was listening to Birju Maharaj at the Vrindaban Gurukul in Mumbai. I sat in the audience, transfixed, as Maharaj spoke about his journey in Kathak. To my complete astonishment, he sang snatches of classical songs with expressions and hand movements to match, and his voice was powerful and in perfect tune. It was a revelation of the layers of accomplishment that lie beneath the obvious one that we see or hear from an artist. He made us laugh and marvel, but my mind was turning in a different direction. Here was a man who, despite his legendary status, took time off to communicate with a small group of people gathered in a hall for an hour or so. His passion, despite his years, permeated the space; each one of us present knew we were listening to a master sharing stories close to his own heart. And, at the root of the event was the fact that he was doing so in response to an invitation from a friend and a fellow artist.

The fellow artist and host, Pandit Hariprasad Chaurasia, sat quietly in a chair on one side of the room. I watched his expression; it was one of pure delight, a child listening to a story being narrated by his friend. He, too, must have a story, I thought, and it needs to be told. When the session ended, I watched Panditji get up to greet his friend. He walked slowly, but his face was lit by a smile. A few words, and he walked away into an inner room. His frailty was alarming. If the book had to be written, it had to be done soon. I set the ball in motion, messaging his son, Rajeev, who agreed that a biography was a wonderful idea.

The question was who would write it. I imagined assigning it to a writer well-versed in classical music, who could hold discussions on a raag with Panditji, and connect with him on a musical level. It would be a book to capture his musical virtuosity and shed light about the man and his journey to his unique status as one of the world’s greatest flautists. However, Rajeev, and Panditji’s daughter-in-law, Pushpanjali, wanted me to write it, not as a treatise on his music and its intricacies, but as a story about his journey, which would show readers the man behind the legend. And I went back from the meeting holding the thought in my head that I had been entrusted with a huge responsibility. 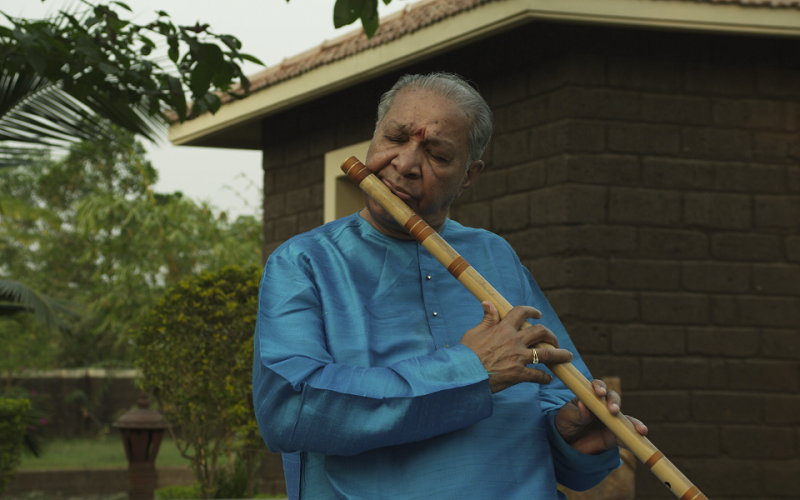 The Man Behind The Flute

The first thing I realised was that the fragility of his body notwithstanding, the flautist’s will burned fierce. He travelled incessantly, running two gurukuls where he spent days teaching and guiding. If capturing the depths of his music was a challenge, getting its creator to settle down for interviews was quite another.

Yet, we made time, snatches of it, and the stories unravelled. Helping me in the endeavour was the sharp memory and detailed narration of events in chronological order by Panditji’s wife, Anuradha, who spent long hours with me, giving me her time and stories unstintingly. There was emotion at times, showing me that almost every artist has a woman (a mother or a wife) who supports him in his quest for perfection. And, if she is a talented artist herself, suffers a feeling of being denied her due.

In between my meetings with his family, the musicians he’d nurtured and/or worked with, and other research-based reading to get a sense of the chronology, I listened to Panditji’s compositions and recitals, steeping myself in the moods they created. It was my way of preparing my mind.

I decided the best way to get Panditji’s undivided attention was to camp at the Vrindaban Gurukul in Bhubaneswar. Not only did Panditji give me his time, sharing stories and recollections that were added to my growing collection on him, it also gave me an insight into the man behind the flute – down-to-earth, practical, witty, and possessing a humility that was rare for an artist of his stature. And so, Panditji became Hariji – human and real, not someone on stage who was unapproachable and had to be held in awe. 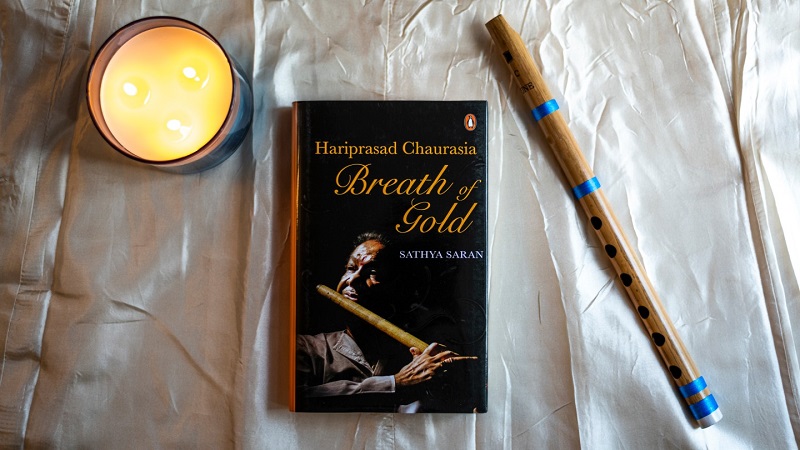 A Life Full Of Stories

When I finally sat down to write Hariji’s story, I wanted it to be as chronologically accurate as possible. But a life of such varied textures and musical adventures would hold more stories than could be covered in a book of manageable size. I decided to focus on the stories that showed his dedication, his complete immersive love of music, and his humility.

It was equally important for me to discover what it was about Hariji that’s evoked such unanimous feelings of affection, if not love, for him. My interviews, in fact, leaned in this direction. And in putting down what made his music unique. I used whatever would help in this from the interviews with his contemporaries and students and chose interludes from the research material to add to the primary research.

In fact, the emotion I was seeking especially shone through in interviews with Hariji’s contemporaries. Both singer Pranab Patnaik and music director Prafulla Kar, whom I met in Bhubaneswar, spoke of his helpful nature and his genius in composing music – memories of their days in Cuttack when Hariji was working with A.I.R. Despite being a composer who was creating music independently for dance ballets, Hariji felt no belittlement in being the accompanist. In fact, Kar added that he found guiding inspiration in something Hariji had told him: ‘I learnt humanity from him, that if you give love, you get love. While hate only breeds hate.’

Hariji’s own emphasis in many of our interactions had been on his role as a teacher, his need to share what he has learnt, to give back by giving freely of his art. That was another area I explored quite thoroughly by talking to his students, senior and new, by visiting his gurukuls to watch the process and his interactions with his students there, and by reading through and listening to the ‘text book’ written by his student and assistant in Rotterdam at the Conservatory. Telephonic interviews with students living in Europe were fruitful in showing me the power of his teaching. For example, Stephanie Bosch, who became a student after listening to a CD by Hariji, thought nothing of driving three hours from Bonn to Rotterdam for a one-hour class with her guru. Bosch, like many of his other students, performs with Hariji on stage, and counts such occasions as her happiest moments. 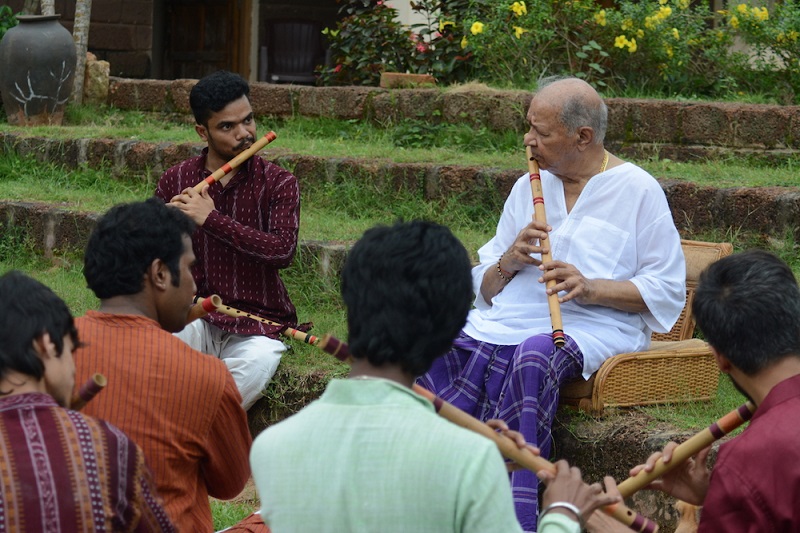 As the writer, it was vital for me to tell the story in a way that would hold the reader’s interest, capture his/her imagination and inspire even those who may never have listened to Hariji’s flute. It was a life full of stories worth telling, and though I was greedy, I chose carefully to avoid repetition and to show up different facets of my subject’s nature.

When I sat down, my research done, to start writing, the stories and the music, like moonlight on water, formed a pattern, that almost of its own accord spread itself into my words.

Best known for her long association with Femina, which she edited for 12 years, Sathya Saran is also the author of a variety of books. The Dark Side reflects her love of the short story, while her critically acclaimed biographies of S.D. Burman, Jagjit Singh etc. bear testimony to her love of cinema and music. Passionate about writing she recently held the first of its kind Writers Conclave titled The Spaces between Words at Kaladham near Hampi.