I have twin daughters who believe that the world is their oyster. They are gregarious, curious and confident three year olds, setting their own rules. Their favourite colour is not pink and they do not show any real proclivity towards dolls. Yet, I find myself narrating “princess” stories to them: stories of young women who showed little or no gumption and basically just waited around for their prince charming. Stories that perpetuate the belief that they need to be rescued. Narratives that paint women as the “weaker sex”.

What if Sleeping Beauty did not wait around to be kissed by a prince and instead created a vaccine? What if Cinderella did not bother about a deadline and traded equity markets across the globe, eighteen hours a day? What if our little girls dream of walking on Mars or winning at the Olympics or even scaling Mount Everest? Are we not doing a great disservice to them by planting a prince charming in their dreams? 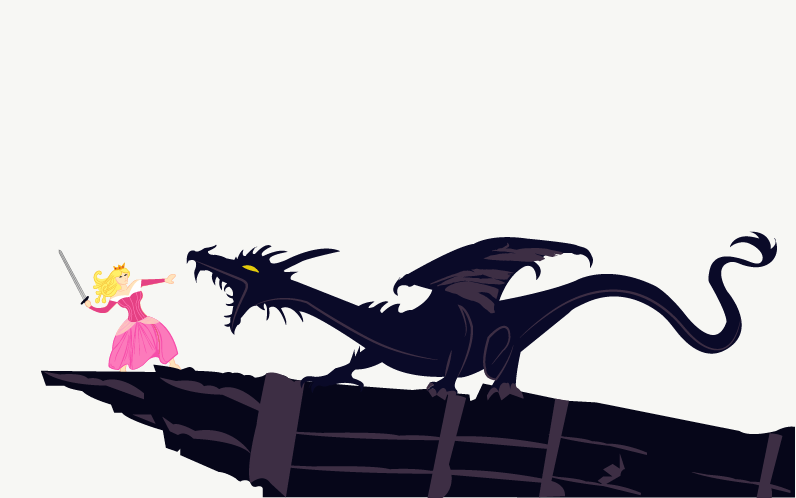 A woman, since ancient times, has been treated as the property of a man. Be it her father or husband or later in life, her son. There is substantial evidence to prove this. Simone de Beauvoir’s seminal book describes women as the “Second Sex”. First published in French in 1949, the book serves as a bible to feminists and is credited with starting the second-wave of feminism. In the book, Simone de Beauvoir states that man is considered the default, while the woman is considered the “Other”, thus making her the “Second Sex”. For the longest time, women could derive their identity only from their attachment to a man. A woman could only be someone’s wife or daughter or sister. Independently, she just did not exist. Man held the superior positon of self or subject while the woman is always the object, the other. She is considered inessential and incomplete without a man and needs a man to impose his will on her. He creates, acts, invents; she waits for him to save her. In the book, de Beauvoir attempts to make sense of these imbalanced gender roles.

However, over centuries there have been women brave enough to stand tall and fight for their cause. The aptly titled Good Night Stories For Rebel Girls had me fall in love with it. When I first heard of it, I thought that it seemed like a strange book to read to my girls at night. You see, we are naturally programmed to raise our guard when we hear the word “rebel”. However, like you can’t judge a book by its cover, you can’t judge it by its title either.

A remarkable piece of non-fiction, the book is both inspiring and humbling in equal measure. 100 short stories of 100 women from across time, boundaries and nationalities, united by their singular commitment to their dreams in the face of adversity. Each story is written like a fairy tale to make it easier for children to relate to. It’s a wonderful book that teaches young girls that with hard work, perseverance and belief in self, they can achieve just about anything. When I read the book to my girls, I want them to believe that dreams do become a reality. 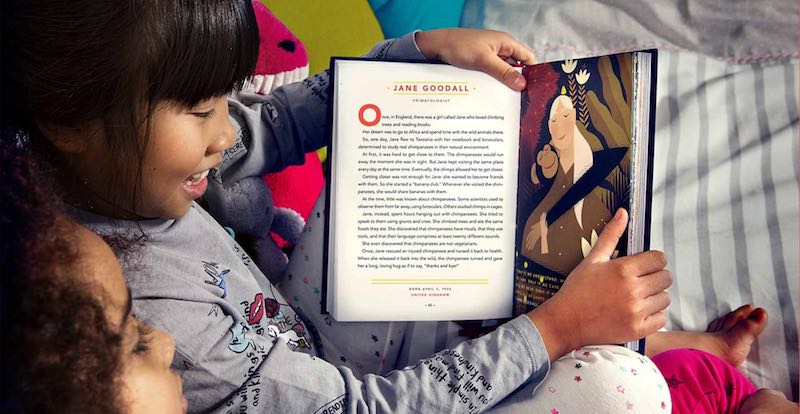 (Image Credit: Rebelgirls.co)
The story of Ada Lovelace had me in love. In a century, when technology itself did not exist, Ada Lovelace was helping Charles Babbage with coding the first computer programme. All my life I have only read about Charles Babbage. In all the books written on computers, technology, and general knowledge there is little or no mention of this amazing woman of the 19th century. It was an instant hook.

Brenda Chapman and I share a common grouse: Why do women always have to be portrayed as helpless characters that need to be rescued? As per Good Night Stories For Rebel Girls, on joining Walt Disney Studios, Brenda Chapman soon discovered that she was one of the very few women animators there. “That’s when I realised why princesses in their films were so helpless: They had all been created by men”. However, in order to see the change, one must be the change. That’s when the idea for the film “Brave” germinated. A film that won her an Oscar and a Golden Globe. Princess Merida of “Brave” is far from a helpless damsel in distress. She is strong, independent and brave.

Simone Biles is a girl who can fly. One of the greatest gymnasts in American history, she won five medals at the Rio Olympics, four of them gold!

One day, a journalist asked her, “What about the goal of winning a gold medal?”
“A medal can’t be a goal”, Simone replied smiling. “It’s like my mom always says: “If doing your best means you come out on top, that’s awesome. If it means that you finish fourth, that’s awesome too.”

However, she has demonstrated strength not only on the bars but also as a person. Earlier this year she spoke up about the sexual abuse that she experienced at the hands of the former USA gymnastics team doctor Larry Nassar, exemplifying her courage both on and off the floor. Courage to Soar: A Body in Motion, A Life in Balance tells the story of this one woman’s grit and determination. 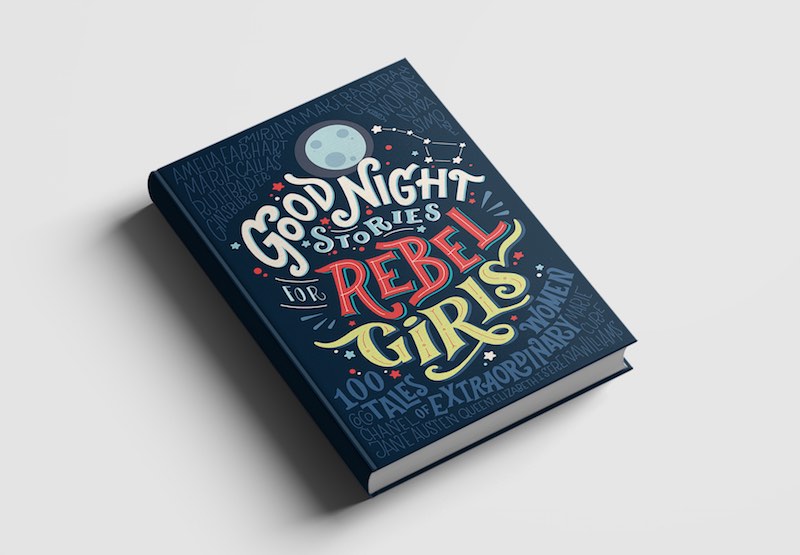 (Image Credit: Rebelgirls.co)
For years, women around the world have been treated as second-grade citizens. Be it in the developed countries or African countries, the treatment is similar. In its 200-year-old history, a country like America has never had an elected female president. Strides are now being taken in the right direction. Hillary Rodham Clinton went out and fought against bullies and critics to become the first woman nominated by a major party for President of United States. “To every little girl who dreams big, I say: you can be anything you want – even President”. Whether in victory or in defeat, in order to move forward, we must look in the rear-view.

A century before Hillary Clinton, there was a time when women’s lives were completely dictated by men. It was men who decided what women should or should not wear and what they should or should not do. So they decided that women should not play sports or work or even vote. However, Kate Sheppard, a champion of women’s suffrage, decided that she was not fine with that. She believed that women should have the right to vote and started a petition to mobilise her cause. She garnered so many signatures that it became the longest petition ever presented. And with that, New Zealand became the first country in the world where women gained the right to vote.

However, it was not until 1918 that women (over 30) in Britain were given the right to vote. The word “suffragette” was first used to describe women campaigning for the right to vote in an article in a British newspaper in 1906. Although British women and men had been arguing for both universal and women’s suffrage since the 1860s, the movement for women’s votes gained momentum when Emmeline Pankhurst and her daughters Christabel and Sylvia founded the Women’s Social and Political Union (WSPU) in 1903. 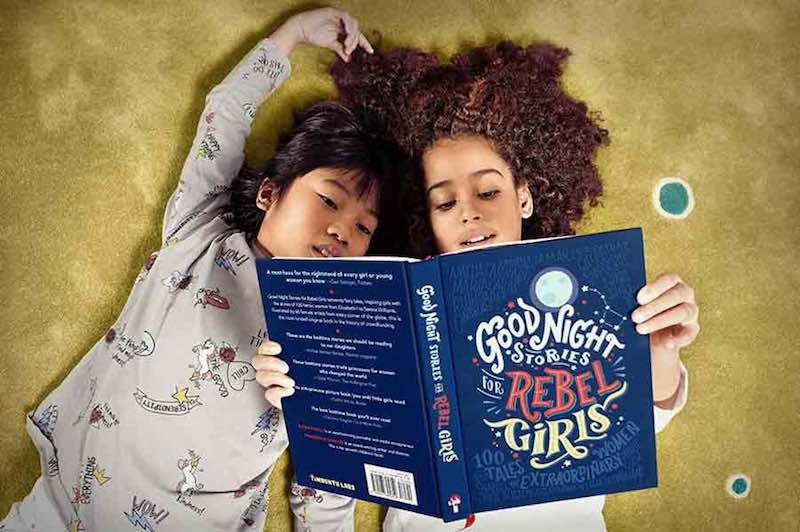 (Image Credit: Rebelgirls.co)
These are just a few women from a very long list of women, who have moved forward with conviction and confidence. Good Night Stories For Rebel Girls features many more. But, what is common among them is the will to work towards their dreams, in the face of resistance. Untiring efforts made by women from across the world have today brought us to a time when many of us can make our own choices.

I don’t want my daughters to grow up with the belief that they need to be “rescued”. Throughout history, women have been charting their future. I want my daughters to be inspired by these women. I want them to learn courage from Rani Laxmi Bai, perseverance from Mary Kom, strength and determination from Margaret Thatcher and grit from Rosa Parks.