Spring cleaning for us is rarely a chore, but mostly a time when we chance upon once forgotten treasures. This year’s intense sorting and organising led to the happy rediscovery of Tabby McTat by Julia Donaldson and Axel Scheffler. A widely read book from our past!

This gem of a rhyming picture-book was presented to us when my firstborn turned one. Almost seven years later, Donaldson’s rhyming, lyrical story and Scheffler’s detailed illustrations still captivate my preschooler and first grader’s imagination. There is something sublimely riveting about a rhyming story, especially one with an evolved plot. Donaldson does a marvellous job of achieving just that. Scheffler’s stirring illustrations make Tabby McTat an interesting book for little ones to look at even if they haven’t completely mastered the art of reading. 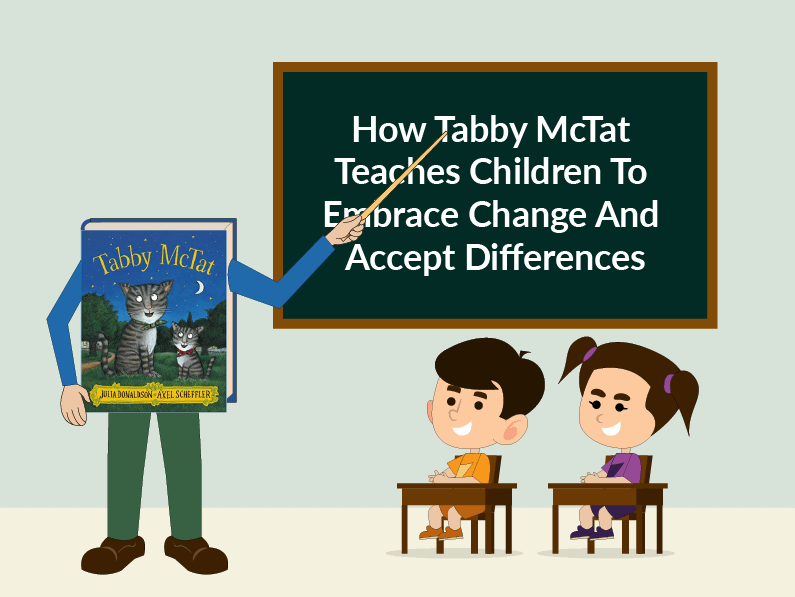 The storyline is simple and easy to follow; yet, it is nuanced and captures a variety of pertinent social, emotional, and socio-economic topics.

Tabby McTat is a busker’s cat and purrs along with Fred as he sings. McTat amuses passersby who toss coins in Fred’s tall checkered hat. Unfortunately, Fred’s ill-fated accident separates the pair, and McTat starts living with Prunella and Pat, who have another cat called Sock. Although McTat is happy with his new life and even starts a family of his own, he can’t stop thinking about Fred and embarks upon a final attempt to find him. He does eventually find Fred and starts performing with him; however, he isn’t happy because he misses “his wife (Sock) and his wonderful life”. When his son, Samuel Sprat shows up, the baton is passed down from father to son, and Sprat takes his father’s place as the busker’s cat. McTat and Sock often come by to listen to the pair entertain passersby who toss coins in the “the old checkered hat.”

Our multiple readings of Tabby McTat over the years have piqued our curiosity in many ways and have presented opportunities for rather animated discussions.

Re-defined Notions Of A Stereotypical Family

When McTat separates from Fred, two women, Prunella and Pat, who lived together took him in. Were they just friends, roommates, partners or married?

For a majority of children, including my own, the notion of a family is relatively conventional with a father and a mother. So, one can only imagine how Prunella and Pat’s unique situation raises a plethora of questions in young minds: how come Prunella and Pat live together? Where are their husbands? Two mothers? Can they have babies? Where’s the father? Rather, why isn’t there one?

A thoughtful response to a variety of such innocent wonderings about the changing view of a “couple” or family can lead to complex adult-child conversations. Today, as same-sex parents, couples and families gain societal acceptance, it’s important to start acknowledging and normalising these changes sooner rather than later. 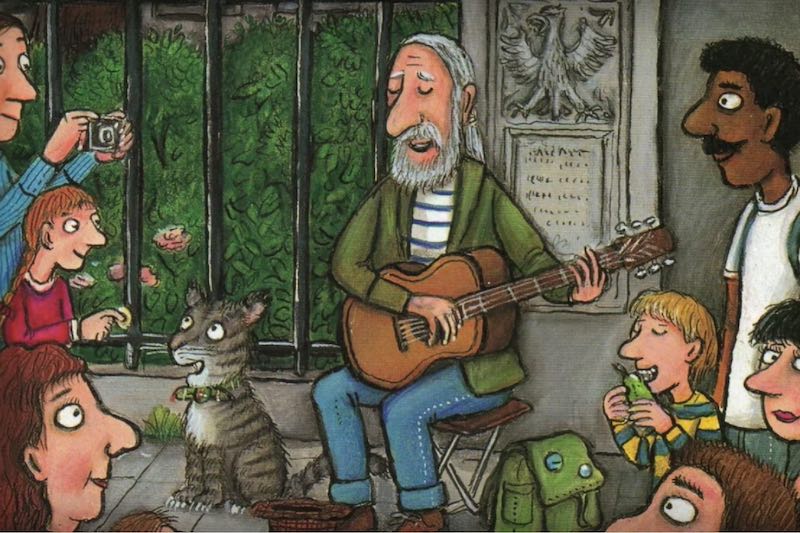 The Nature Of Transitions

Transition is hard for children and adults alike. For example, it isn’t uncommon for children to feel anxious before joining a new school, or for adults to feel nervous prior to starting a new job.  Transitions are a way of life and Tabby McTat’s story makes this fact most tangible.

Tabby McTat terribly missed Fred when he was separated from him, and incessantly searched for the busker. In the process, he meets his ‘wife’ (Sock) and has three children of his own. Once he finds Fred, he realises that he has moved on and transitioned on to a different role or stage in his life. This is somewhat sad yet charmingly true. He, nonetheless, keeps in touch with his friend through his son, Samuel Sprat who has now assumed the role of the busker’s cat. McTat and Sock proudly come by to hear them both sing.

Although hard, McTat’s separation from Fred brought about new experiences, and that too, happy ones. He finds joy in his revised circumstances, something he may not have experienced otherwise. The ending is happy, one that children readily accept. It also provides delightful insights into the range of emotion that accompany transitions. Most importantly, it’s a sweet reminder that transitioning doesn’t always amount to severing ties, but it can also mean expanded social connections and life experiences. This can be a source of comfort to both adults and children, as we continue to accept and adapt to change.

As mentioned, Scheffler’s illustrations are detailed, visual and vivid. Specifically, they are a relatively realistic portrayal of the socio-economic disparity of a big city.

For instance, two of McTat’s three children were adopted by families from very contrasting milieus. One was obviously affluent with rich silk drapes, expensive paintings, and a butler. The other kitten was adopted by a regular family with an apron-wearing mom and chickens running around in the back yard. Tabby McTat’s search for Fred took him to a range of places, too. He explored manicured upmarket public parks, ethnic neighbourhoods, and found homeless folk under overhead bridges. The storyline touches upon petty crime and alternate career paths that people are forced to pursue, such as street performances (singing, music performances, magic shows, etc.).

For children, who may or may not be reading, just looking at the pictures can create stimulating conversations. It’s fascinating to see how children process these images and ask fairly relevant questions around these aforementioned socio-economic issues. Once again, a meaningful discussion around these topics can go a long way in helping children develop empathy and get a sense of differences and economic hardships that some people have to face. Adults are, of course, welcome to transform talk into activism by perhaps volunteering with their children at a soup kitchen or by donating clothes and supplies to a social organisation. The illustrations provide a powerful context for a variety of intellectual and action-oriented opportunities. 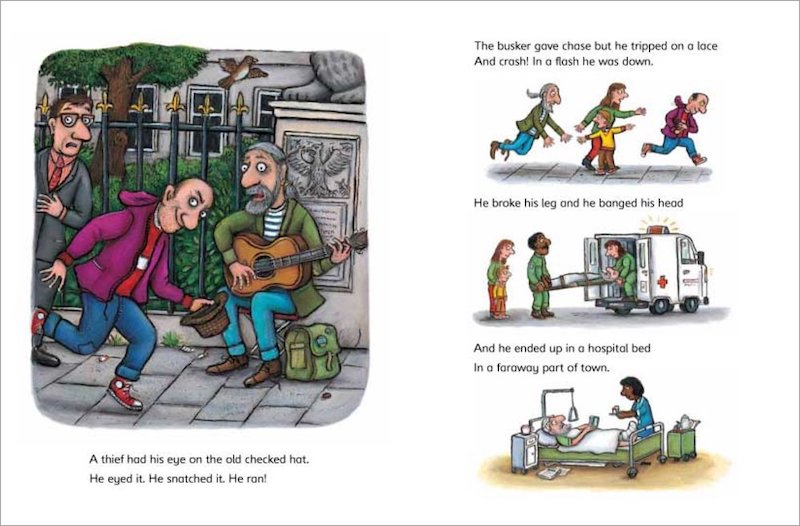 Tabby McTat also drives home the point that animals have feelings. He’s troubled by his separation from Fred and searches high and low for him. At the same time, he’s happy to find love and is affectionate towards his babies. Later, once he finds Fred, he realises that he misses his family. All these emotions that McTat experiences are palpable and can help children become more compassionate towards animals, thereby, developing an additional layer of kindness.

On a lighter note, Tabby McTat’s trajectory offers a strong message for both adults and children alike. We should all make sure our shoelaces are always tied. Because if the busker had made sure his laces were tied, he wouldn’t have fallen and consequently separated from his beloved cat by ending up “in a hospital bed in a faraway part of town”. But then again, a happenstance separation from the busker won’t have led Tabby McTat to the wonderful adventures he had. So, putting it all in context, the lesson is to remember to always tie your shoelaces, because the adventure ahead would be just a little bit safer!

Every now and then, we are fortunate enough to chance upon books that are simple, yet multifaceted. Books that are well-written, visually beautiful, and offer a variety of themes that we can all think and talk about. The types of books that appeal not only to children but adults as well. Tabby McTat is undoubtedly one of those rare pieces of children’s literature and a literary treasure that will continue to offer us such thought-provoking messages for years to come.

Have you read Tabby McTat? Do you think the story has a lot to teach children? What lessons did you learn? Share with us in the comments below.